Home World A House Divided: A Palestinian, a Settler and the Struggle for East...
World

A House Divided: A Palestinian, a Settler and the Struggle for East Jerusalem 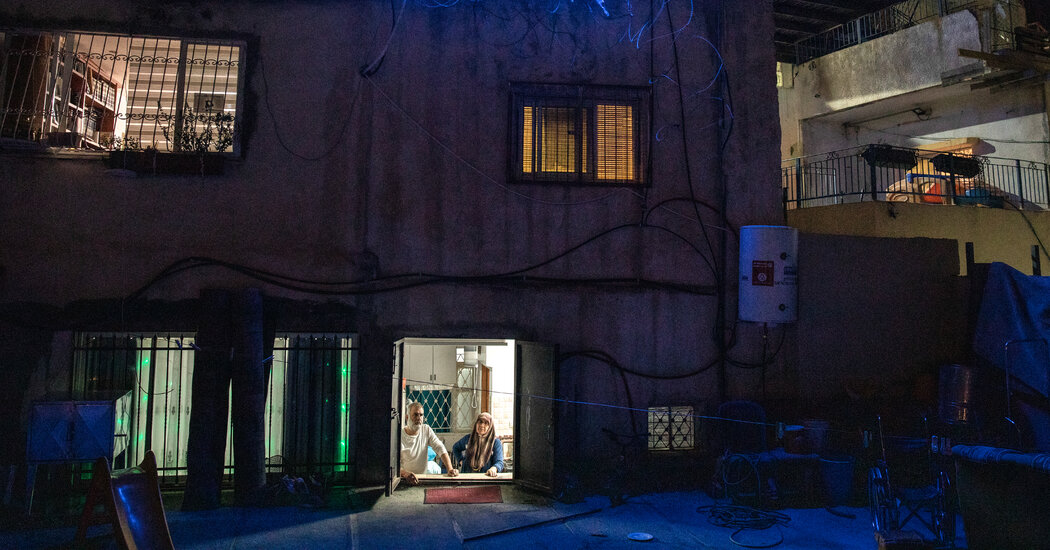 JERUSALEM — Few places in East Jerusalem show the struggle over the city more intimately than a four-story house on a narrow alley in the Silwan district.

Nasser Rajabi, a Palestinian, and his family live in the basement, third floor and part of the second.

Boaz Tanami, an Israeli settler, and his family live on the first floor and the rest of the second.

Each claims the right to live there. Each wants the other out.

An Israeli court has ruled that a Jewish trust owns the building and ordered the eviction of Mr. Rajabi, but the ruling is under appeal.

The case is not just a dispute over a single property: It is part of an effort by Jewish settlers to cement Jewish control of East Jerusalem, a process many Palestinians see as a slow form of ethnic cleansing. A similar dispute in the nearby neighborhood of Sheikh Jarrah, which could lead to the eviction of Palestinians there to make room for settlers, led to protests, clashes and finally war this past month between Israel and Hamas, killing more than 240 people.

Captured by Israel in 1967 but still considered occupied territory by much of the world, East Jerusalem remains a constant flash point between Israelis and Palestinians.

On Monday night, Prime Minister Benjamin Netanyahu, fighting for his political life, was deliberating whether to allow far-right Jewish groups to march through Palestinian areas of the city later this week — a decision that many fear will lead to a new bout of violence. And Israel’s attorney general said he would not intervene in the Sheikh Jarrah dispute, which may expedite the evictions.

Like Sheikh Jarrah, Silwan has the potential to become a crucible.

For 17 years, the Rajabi and Tanami families have shared the house uneasily.

The two families barely speak to each other, except when the Tanamis accidentally drop laundry or toys from their balcony onto the Rajabis’ downstairs terrace, forcing the families to negotiate an awkward handover.

Mr. Rajabi responded by erecting his own neon Islamic crescent.

On a recent night, Mr. Rajabi glanced up from his terrace to see Mr. Tanami on his balcony, texting on his phone, the screen illuminating his face.

How the two families ended up in the same house is complicated.

Mr. Rajabi’s relatives built the house and his family bought it from them in 1975, his lawyer said. In the 1980s, the family divided it into two parts and sold an apartment on the first and second floors to a Palestinian family. That family later sold it to a third Palestinian owner.

In March 2004, a few days before Mr. Rajabi planned to move some of his family into the apartment, the settler group took over the apartment late one night, locked out Mr. Rajabi, and allowed Mr. Tanami to take his place.

Israeli courts ruled that the settlers had bought the apartment legally.

In a separate ruling, a court said a Jewish trust also has the right to the entire building because the land belonged to the trust before the foundation of the Israeli state in 1948. The trust was dormant for years. But in 2001 a court appointed three new trustees to manage its assets, essentially reviving the organization.

Claiming all the land held by the trust in the 19th century, the revived organization wants to take over not just Mr. Rajabi’s property, but the whole neighborhood.

Jewish settlers have already moved into five other homes on or near Mr. Rajabi’s alley. Now they are pushing to evict more than 80 other families, numbering about 700 people, a move that would turn a Palestinian neighborhood of Silwan into a Jewish one.

The courts have already approved six other homes for eviction in cases that are also on appeal.

Ateret Cohanim, a settler group that spearheaded the revival of the trust and advocates for residents like Mr. Tanami, says Jews had the right to live on the property because they lived there not just during the 19th century, but also in antiquity.

In the late 1930s, the site was abandoned. Documents show the British authorities, which then ruled Palestine, evacuated the Jewish residents, fearing they were vulnerable to an Arab insurrection. After the British left and Jordan occupied the West Bank in 1948, Palestinian families moved onto the uninhabited plot.

Israel captured the West Bank from Jordan in 1967, and later annexed East Jerusalem, a claim not recognized by most countries, which consider it occupied territory like the rest of the West Bank.

Israeli law also permits Jews to reclaim properties in East Jerusalem that were Jewish-owned before 1948. No equivalent right exists for the hundreds of thousands of Palestinians who fled their homes that year.

Moving Jews in and Palestinians out also contravenes international law governing occupied territory, the United Nations rights office says. Israel says East Jerusalem is not occupied so that law does not apply.

The goal, settler leaders say, is to establish a large enough Jewish presence in East Jerusalem to ensure that it can never become the capital of a future Palestinian state.

“The way to do it is to put layers around” the Old City of Jerusalem, said Aryeh King, a deputy mayor of Jerusalem and a settler leader. “Layers of what? Layers of Jews. Why? Because by putting the layers, we might avoid in the future any division of the city, any way of giving part of Jerusalem to our enemy.”

One of those layers is in Silwan, a Palestinian neighborhood southeast of the Old City that spans the sides of a steep valley.

Mr. Rajabi and Mr. Tanami live on the valley’s eastern slope, in a neighborhood known to Palestinians as Batan al-Hawa and to some Israelis as the Yemenite Village.

From their windows you can see the glint of the Dome of the Rock, the shrine built where Muslims believe the Prophet Muhammad ascended to heaven. Near the shrine is the Aqsa Mosque, also sacred to Muslims. And the compound is built on the ruins of the Second Temple, a site sacred to Jews, which has turned the surrounding areas like Silwan into ones coveted by Jewish settlers.

The arrival of the settlers to the area has turned the narrow and once obscure alley into a low-level conflict zone. Riot police officers patrol, while private guards, funded by the state, escort settlers to and from their front doors.

The settlers say they are the victims of Palestinian violence, and that the police presence is necessary for their protection.

“Stones, Molotov cocktails, concrete blocks,” said Mr. Luria, the spokesman for Ateret Cohanim. “We’re talking about enormous amounts of aggression and hatred aimed towards the Jew because he is a Jew.”

Palestinians in the neighborhood speak of frequent detentions, raids on their homes, and the police use of tear gas and stun grenades. During a recent confrontation, a tear-gas canister flew onto Mr. Rajabi’s terrace, damaging an armchair.

A few weeks ago he sat on his terrace as Jews at a nearby property celebrated the reunification of Jerusalem in 1967, an annual commemoration offensive to Palestinians.

“The more houses that we own in Jerusalem,” a speaker said to a small crowd, “the greater the connection we have with God.”

Exasperated by the situation, Mr. Rajabi decided several years ago to move elsewhere in East Jerusalem. Since it is hard for Palestinians to obtain planning permission — a study by the United Nations office for humanitarian affairs described it as “virtually impossible” — he built a new home without obtaining the right permit.

The authorities demolished it accordingly, he said, and when he rebuilt it, it was demolished again.

“This is the process of ethnic cleansing,” he said. “They are trying to push us, through legal means, out of Jerusalem.”

Fleur Hassan-Nahoum, another deputy mayor, acknowledged that “for years, permits weren’t given” to East Jerusalem residents seeking to build new homes, and said that her administration had started to make the process easier.

But she said the land reclamation law necessarily favored Jews in order to protect Israel’s character.

She added: “This is the essence of our country.”