Home World A Press Corps Deceived, and the Gaza Invasion That Wasn’t
World

A Press Corps Deceived, and the Gaza Invasion That Wasn’t 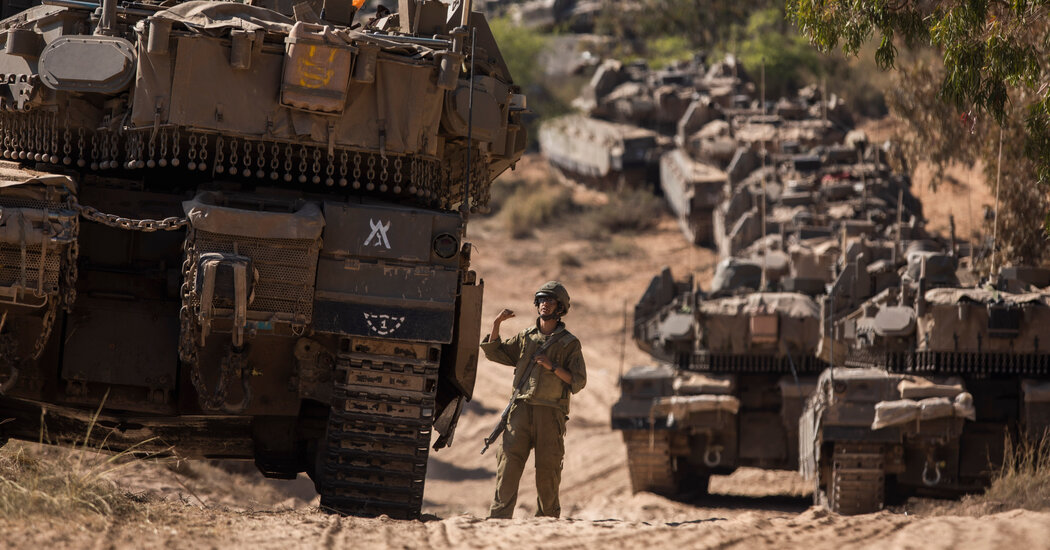 The Israeli military abruptly announced after midnight on Friday that its ground forces had begun “attacking in the Gaza Strip,” saying it on Twitter, in text messages to journalists, and in on-the-record confirmations by an English-speaking army spokesman.

Within hours, those reports were all corrected: No invasion had taken place. Rather, ground troops had opened fire at targets in Gaza from inside Israeli territory, while fighters and drones were continuing to attack from the air. A top military spokesman took responsibility, blaming the fog of war.

But by Friday evening, several leading Israeli news outlets were reporting that the incorrect announcement was no accident, but had actually been part of an elaborate deception. The intent, the media reports said, was to dupe Hamas fighters into thinking that an invasion had begun and to respond in ways that would expose far greater numbers of them to what was being called a devastatingly lethal Israeli attack.

The military’s English-language spokesman, Lt. Col. Jonathan Conricus, insisted that the false announcement had been his own mistake, but an honest one, telling foreign correspondents in a tense conference call early Friday evening that he had misunderstood information coming in “from the field” and had released it without adequately verifying it.

But in the Hebrew-language press, the military was simultaneously being praised for luring Hamas fighters into a network of tunnels in northern Gaza that was pounded by some 160 Israeli jets in a fury of airstrikes beginning around midnight.

“This is how the tunnels became death traps for terrorists in Gaza,” Israel’s Channel 12 news station headlined a report by its military reporter, which called the spread of misinformation to foreign journalists a “planned ploy.”

The Israeli press cited the military as saying the plan had worked. That claim could not be independently verified.

But the possibility that the military had used the international news media to rack up a bigger body count in Gaza generated sharp questions for Colonel Conricus in the conference call. Israeli officials insisted that the call be held off the record, but a Times reporter who did not join the call obtained a recording of it from another news organization.

Representatives of The Times, The Washington Post, The Wall Street Journal, National Public Radio and Agence France-Presse, all of which had mistakenly reported a ground invasion early Friday, peppered him with questions about whether they had been turned into accessories to the military, why it had taken hours for the invasion report to be reversed, and how they would be able to trust the military’s statements going forward.

Colonel Conricus, a veteran officer and spokesman with a reputation for precision in what he knows and doesn’t know, said there had been no “attempt to try to fool anybody or to cause you to write anything that isn’t true,” adding: “I can understand that it may look differently.” He called it “frankly embarrassing.”

But Colonel Conricus, who is set to retire from the military at the end of June, also acknowledged that the military had indeed sought to deceive fighters in Gaza, through tactics like noisily moving large numbers of tanks and other armored vehicles up to the border — as if an invasion were indeed occurring.

The objective, he said, was to induce Hamas anti-tank missile crews to emerge from their hiding places and begin shooting at Israeli forces, allowing their positions to be detected and destroyed — and to trick other Palestinian fighters to stream into the underground tunnel network, which Israel generals were confident they could now destroy from the air.

“Nobody here on this call are the target audience,” Colonel Conricus said. “The target audience are hopefully the dead terrorists that are now lying inside the tunnel. What the I.D.F. wanted to create was a situation where they went down into the tunnels so that we could attack them.”

But that prompted objections from several correspondents, particularly those from organizations with staff members in Gaza, saying it put them at greater risk.

Colonel Conricus declined to be interviewed for this article.

“If they used us, it’s unacceptable,” he said. “And if not, then what’s the story — and why is the Israeli media widely reporting that we were duped?”

Because of its vital role defending Israel’s military actions in the international court of opinion, the army spokesman’s office has been a sought-after posting and something of a launching pad for political careers.

The office has played a part in other deceptive tactics in recent years, including in 2019, when a fake medevac was staged, complete with bandaged soldiers and a helicopter ride to a hospital, to convince the Lebanese media that a Hezbollah missile attack had caused Israeli casualties.

The spokesman’s office waited two hours — long enough for Hezbollah fighters to declare victory and stand down — before announcing that no Israeli troops had actually been hurt.

But Amos Harel, a military analyst for Haaretz, the Israeli newspaper, said that involving the office in a pattern of duping journalists would be an alarming development.

“It’s a very dangerous place for the I.D.F. to be, to be suspected of misleading the international press, especially when we’re on the verge of an escalation with Hamas, and Israel depends so heavily on trying to explain itself with the international media,” Mr. Harel said.

“It’s risky for journalists, too,” he added. “The Israeli Army may be forgetting that foreign journalists are on both sides of the fence, and it could be dangerous for them if they’re suspected of being used for Israeli psychological operations.”

All through the week, the conflict has inspired a broader storm of misinformation on social media, as well. False claims are being widely shared around the world — sometimes with misidentified or mischaracterized photos and videos, or fake rumors about Israeli troop movements or Palestinian threats.

Disinformation experts worry that in such a charged atmosphere, the effect of all that false information — some of it purposeful, some accidental — is potentially deadly, worsening tensions between Israelis and Palestinians at a critical time.

Adding to the swirl of confusion about the specific Gaza claim was a new report by Israel’s Channel 10 on Friday that a General Staff Deception Unit had recently been created, and that it had been activated to cause Hamas to think that a ground invasion was underway.

The false invasion announcement came at 12:22 a.m. Friday, in an English-language statement that was vague: “IDF air and ground troops are currently attacking in the Gaza Strip.”

The ambiguity of the word “in” had not been present in the Hebrew-language version of the statement, issued a few minutes earlier. But when Western reporters checked with Colonel Conricus, he assured them that Israeli troops were inside Gaza.

In the Friday conference call, Colonel Conricus at one point tried to minimize the damage, saying that the discrepancy was only “about a few meters — it’s not a very big difference.”

But the discrepancy between English- and Hebrew-language reports set off a frantic race in Israeli newsrooms and foreign news bureaus to clarify the situation on the ground.

At 1:43 a.m., Roy Sharon, the military correspondent for Israel’s Kann News, provided answers with certitude: “This is not a ground invasion. Repeat: There is no ground invasion into the Gaza Strip. I don’t understand this strange briefing.”

By then, according to Israeli reports, the military operation had already concluded.