A ‘System of Espionage’ Reigned at Ikea, a French Prosecutor Charges 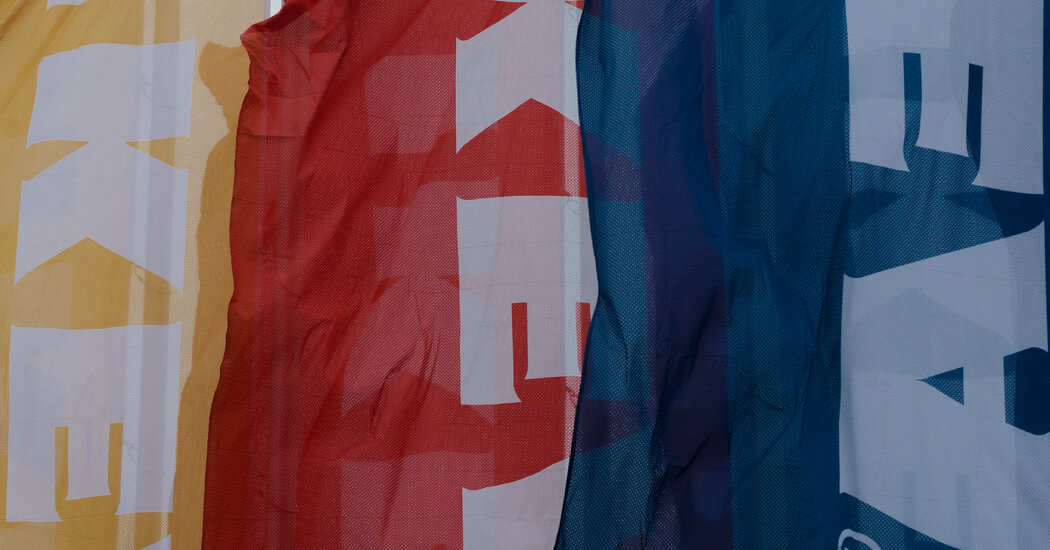 VERSAILLES, France — The USB stick mysteriously appeared from an unidentified deliveryman. It held an explosive trove: a cache of startling emails detailing an intricate effort by Ikea executives in France to dig up information on employees, job applicants and even customers.

“Tell me if these people are known to the police,” read one executive’s message to a private investigator, seeking illicit background checks on hundreds of Ikea job applicants.

“A model worker has become a radical employee representative overnight,” read another. “We need to find out why.”

A decade after those emails surfaced, they are at the center of a criminal trial that has riveted public attention in France. Prosecutors are accusing the French arm of Ikea, the Swedish home furnishings giant, and some of its former executives of engineering a “system of espionage” from 2009 to 2012.

The alleged snooping was used to investigate employees and union organizers, check up on workers on medical leave and size up customers seeking refunds for botched orders. A former military operative was hired to execute some of the more clandestine operations.

The case stoked outrage in 2012 after the emails were leaked to the French news media, and Ikea promptly fired several executives in its French unit, including its chief executive. There is no evidence that similar surveillance happened in any of the other 52 countries where the global retailer hones a fresh-faced image of stylish thriftiness served with Swedish meatballs.

But the extensive activity in France, which court documents suggested stretched back to 2002, has renewed questions about data violations by corporations in a country that has elevated privacy rights in the digital age.

The case, which stems from a lawsuit brought by France’s Force Ouvrière union and nearly 120 plaintiffs, mostly from labor organizations, has also cast a light on deep-seated tensions in France between employers and unions, which tend to be more heated than in Sweden.

Paméla Tabardel, the deputy public prosecutor of Versailles, near Ikea France’s headquarters in Plaisir, is seeking a fine of 2 million euros ($2.35 million) against Ikea France, prison terms of at least a year for two former company officials and a private investigator, and fines for some store managers and police officers. In all, 15 people are charged. A verdict from a panel of judges is scheduled for June 15.

“Ikea came to France touting an image as a homespun retailer with humanist values,” Ms. Tabardel told the judges before a packed courtroom last week, as the trial wrapped up. Instead, she said, Ikea France illegally surveilled at least 400 people and used the information to its advantage.

Ikea’s lawyer, Emmanuel Daoud, denied that systemwide surveillance had been carried out at Ikea’s stores in France, more than two dozen at the time, and demanded that the charges against the company be dropped. He argued that any privacy violations had been the work of a single person, Jean-François Paris, the French unit’s head of risk management, who Mr. Daoud said had acted “alone” without the knowledge of top Ikea executives.

Mr. Paris testified that Ikea France executives had been aware of and supported the activity. “This was not a personal step, but a system put in place at the request of the management of Ikea,” he said, accusing the company of “cowardice” for pinning the blame on him.

A lawyer for Jean-Louis Baillot, the fired chief executive who is charged in the case, denied that his client had been aware of any systematic surveillance and said Mr. Baillot had been wrongfully dismissed.

Victims’ lawyers described a methodic operation that ran along two tracks: one involving background and criminal checks of job candidates and employees without their knowledge, and another targeting union leaders and members.

The emails and receipts showed that Mr. Paris handed much of the legwork to Jean-Pierre Fourès, a wiry, plain-speaking former French military operative in Africa who ran his own investigative agency and boasted of “leaving no traces” of his work.

Mr. Fourès surveilled hundreds of job applicants, gleaning information from social media and other sources to speed vetting and hiring as Ikea expanded in France. He also did background checks on unsuspecting customers who tangled with Ikea over big refunds. He insisted that he had never broken the law in gathering background material.

Some Ikea managers tapped police sources to gain access to government databases for job applicants at up to nine stores, seeking records on drug use, theft and other serious offenses. People whose files turned up “dirty” would not be hired, according to plaintiffs’ lawyers. As in the United States, applicants in France must consent to background checks.

The surveillance encompassed career workers. In one case, Mr. Fourès was hired to investigate whether Ikea France’s deputy director of communications and merchandising, who was on a yearlong sick leave recovering from hepatitis C, had faked the severity of her illness when managers learned she had traveled to Morocco.

He engaged a contact to pose as an airline worker and ask the 12-year Ikea employee, Virginie Paulin, to furnish copies of her passport stamps to win a free ticket offer. The passport confirmed her travel to Morocco.

“Excellent!” Mr. Baillot, the chief executive at the time, wrote in an email to Mr. Paris and Claire Héry, who was the director of human resources. “We’ll do more checks after Christmas to corner her,” he wrote. (Ms. Héry’s lawyer, Olivier Baratelli, said there was no evidence she had been aware of systemic surveillance. The charges against her were dropped.)

Ms. Paulin was eventually fired. She told The New York Times in 2012 that she had a second home in Morocco, and had flown there to recuperate from her illness. She said she had been so distraught by her dismissal that she attempted suicide.

Ikea officials paid particular attention to unions and their efforts to recruit members. In 2010, tensions erupted when Adel Amara, a union leader at an Ikea store in Franconville, northwest of Paris, rallied employees to strike for a 4 percent raise. Ikea said the strike had cost it millions of euros in lost sales.

After that, Ikea “tried to prevent more strikes by turning to a system of espionage,” said Vincent Lecourt, a lawyer for one of the store’s French unions. Ikea managers set up a surveillance net to gather information to fire Mr. Amara and curb militant union activity, plaintiffs’ lawyers said.

GSG, a French security company hired by Mr. Paris, advised Ikea to set a “legal trap” for Mr. Amara, and sent one of its agents to pose as a cashier, court documents showed. The mole infiltrated workers’ ranks, reporting conversations with Mr. Amara and his wife, also an Ikea employee, while spying on a number of other union activists.

“Their plan was to infiltrate the unions and explode them from the inside,” Mr. Lecourt said.

Mr. Paris also hired a bodyguard disguised as an administrative assistant with the goal, he testified, of protecting officials who claimed that Mr. Amara had harassed them. Mr. Amara was later found liable by a criminal judge for moral harassment after Ikea France filed a complaint.

Mr. Daoud, Ikea France’s lawyer, said there was no proof of the unions’ allegations. “There was no hunting down of union members,” he said.

That claim has not doused a sense of injustice among workers who said they were forever marked by the moment they learned their employer was spying on them.

Soon after Ikea fired Mr. Amara in 2011, he said in an interview, a USB stick was delivered to his home by a person who refused to identify himself, containing the explosive email trove that became the basis of the lawsuit.

The documents included receipts of nearly €1 million for surveillance operations, as well as a 55-page internal report on Mr. Amara that included his union activities, a psychological profile and legal records dating to when he was a teenager. There were lists naming hundreds of job applicants and employees to undergo undisclosed checks, as well as the orders to investigate some customers.

“That’s when I understood that Ikea was spying this whole time, and that it was a regular practice,” Mr. Amara said. “It was absolutely surreal.”

Mr. Amara said he took the USB stick to French news outlets, he said, unleashing the media firestorm around Ikea France that led to police investigations and the current trial.

“Ikea acted as if it was all powerful over its employees,” he said.

“If Ikea hadn’t been exposed,” he added, “it would have just kept going.”