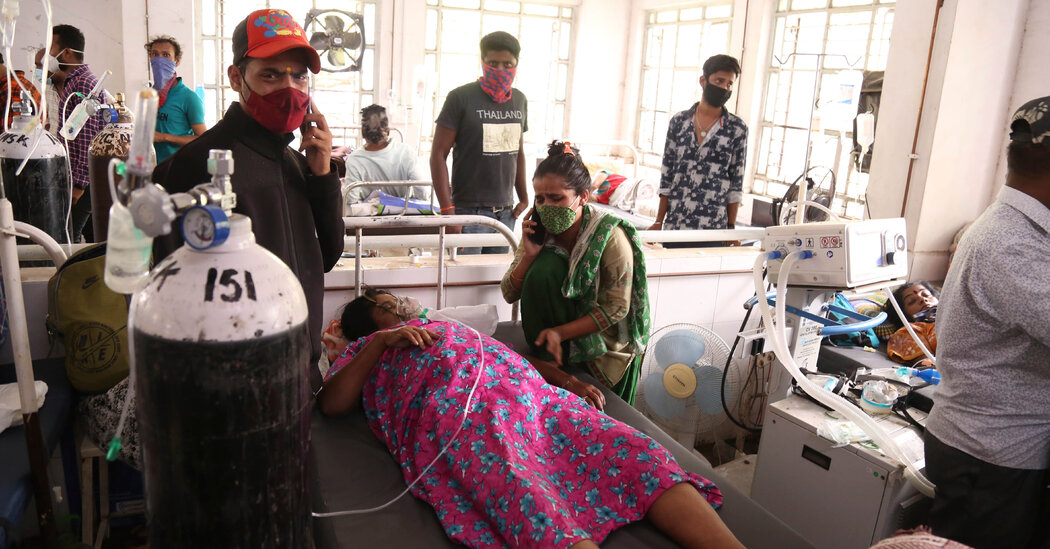 NEW DELHI — India’s health care system shows signs of buckling under the strain of a second wave of coronavirus infections, as the authorities reported nearly 300,000 new cases on Wednesday and an accident at a Covid-19 hospital killed more than 20 people.

The accident happened at a hospital in the western state of Maharashtra after a leak in the hospital’s main oxygen tank stopped the flow of oxygen to dozens of critically ill people. Televised images showed family members wailing in the wards and nurses frantically pounding on the chests of some patients.

All week, hospitals across India have been warning about an acute oxygen shortage. Many hospital officials said they were just a few hours away from running out.“Nobody imagined this would happen,” said Subhash Salunke, a medical adviser to the Maharashtra government.

India is now home to the world’s fastest-growing Covid-19 crisis, reporting 294,000 new infections on Wednesday and more than 2,000 deaths. As supplies of hospital beds, oxygen and vaccines run low, criticism of the government is building.

In a televised address on Tuesday, Prime Minister Narendra Modi urged people to be more careful but said that lockdowns were a last resort. States and cities are increasingly going into lockdown on their own, and critics say the government’s mixed messages are making matters worse.

As examples, they point to recent political rallies held by Mr. Modi that have drawn thousands, as well as the government’s decision to allow an enormous Hindu festival to continue despite signs that it has become a superspreader event. A few days ago, Mr. Modi indicated that he wanted Hindu worshipers to stay away from this year’s festival, called the Kumbh Mela, which is held on the banks of the Ganges river considered sacred by many Hindus.

But the worshipers keep coming — 70,000 showed up on Wednesday for a holy dip, bringing the total to more than 10 million since the festival began in January — and government officials on the ground are doing little to stop them.

Event organizers said that worshipers were required to produce a negative coronavirus test result or be tested on the spot, but they also acknowledged that with such huge crowds, some participants could have slipped in without being tested. Photographs show a sea of worshipers packed together in the gray waters of the river, many without masks. More than 1,000 tested positive at the site in just 48 hours, according to reports by the Indian news media.

Leaders of India’s political opposition and religious minorities say that Mr. Modi’s government, which is firmly rooted in a Hindu-first worldview, is giving preferential treatment to Hindus.

“It is a clear example of double standards,” said Khalid Rasheed, chairman of the Islamic Center of India, a nonprofit religious organization.

He compared the government’s apparent endorsement of the Kumbh to the way it handled a much smaller gathering of a few thousand Islamic preachers in New Delhi last March. Not only was the seminary that hosted it shut down, but hundreds of people were also detained. Officials from Mr. Modi’s party blamed the seminary for spreading the virus.

That spurred an anti-Muslim campaign across India in which Muslims were attacked with cricket bats and run out of their neighborhoods. Many of the Muslims arrested at the seminary a year ago are still awaiting trial.

Government officials have defended the Kumbh festival as safe even as the virus infects some of its most high-profile attendees, including the former king of Nepal and his wife.

Another visitor who was infected is Tirath Singh Rawat, the chief minister of Uttarakhand, which as the state hosting this year’s festival stands to make millions in revenue from the pilgrims and vendors. Mr. Rawat mingled freely in the crowds without a mask, and told those who questioned him that “faith in God will overcome the fear of the virus.”

Shailesh Bagauli, a state official, said the timing of the festival had been determined by “optimal astrological conditions” and that the government had implemented measures like mask wearing and social distancing.

On Wednesday, news of the hospital oxygen leak quickly spread around the country, raising fears that the health care system here, which is chronically underfunded, was about to collapse.

Indian news channels showed images of the oxygen leak at Zakir Hussain Hospital in the city of Nashik.

“When we reached the spot, it was all foggy,” said S.K. Bairagi, a fire chief in the city. He said it took about 30 minutes to repair the tank.

The dwindling oxygen supply is becoming one of the most alarming aspects of India’s second wave. To expedite its delivery to hospitals, India’s railway service has begun running what it calls “oxygen express” trains across the country.

India’s health ministry has said that the daily demand for oxygen at hospitals has reached about 60 percent of the country’s daily production capacity of just over 7,000 metric tons. Government officials countered news reports this week that said India had increased oxygen exports as the second wave of infections was approaching, saying those exports amounted to less than 1 percent of daily production capacity.

But the health ministry also said that it was looking to import 50,000 metric tons of medical oxygen from abroad, a sign that India’s government may be concerned about the domestic supply.

On Tuesday night, more than a dozen hospitals in New Delhi, the capital, put out an alert saying they were hours away from running out of oxygen.

In Lucknow, another major city in northern India, the Mayo Medical Center warned on Wednesday that it was down to a 15-minute backup supply and that “oxygen is not available anywhere in Lucknow.”

Later in the day, hospital officials said they had received 40 oxygen cylinders. But medical experts said that with so many people falling sick, it was a dangerous time to be running low.

“There is definitely an oxygen shortage across the country,” said Shashank Joshi, an endocrinologist and member of the Covid task force in Maharashtra. “The situation is grim.”