Afghan Refugees Find a Harsh and Unfriendly Border in Turkey 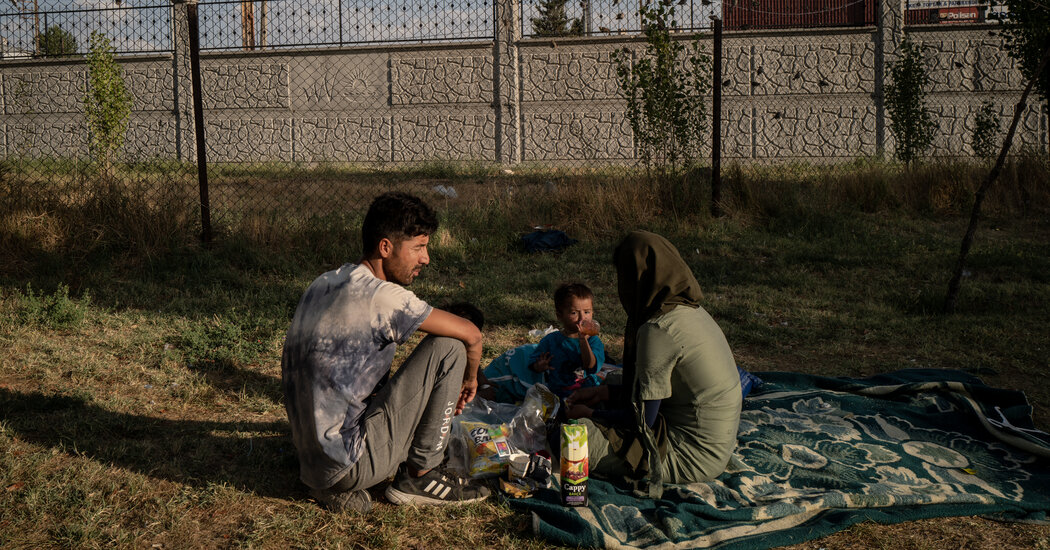 VAN, Turkey — In the days before the Taliban took Kabul, an Afghan woman was doubled over sobbing on a bench in a bus station in eastern Turkey, her children wailing at her feet.

Fourteen Turkish security and migration officials swooped down on her and other Afghan asylum seekers as our reporting team was interviewing them, part of an intensive crackdown by Turkey to apprehend Afghans crossing from Iran by the thousands and to prevent journalists from reporting on their plight. As her husband tried to gather their belongings, the woman clutched her stomach and retched. After prolonged questioning, they were escorted to a police vehicle.

“We came out of despair,” another Afghan, Gul Ahmad, 17, said. “We knew if the Taliban had taken over they would kill us — either in fighting or they would recruit us. So this was the better option for the family.”

Even before the past week’s harrowing scenes of Afghans thronging the Kabul airport to escape the Taliban, many thousands had been steadily fleeing their country over land, making their way some 1,400 miles across the length of Iran to the Turkish border. Their own desperate efforts to escape the Taliban have played out in quieter, though no less painful, tableaus at remote border crossings like the one in the eastern city of Van.

In recent months, as the NATO-led mission in Afghanistan was collapsing, 30,000 Afghans were leaving Afghanistan every week, not all but many across the Iranian border, according to the International Organization for Migration. They have moved to the top of the list of asylum seekers trying to make their way to Turkey, and then to Europe, supplanting Syrians as the largest group of new migrants arriving, even as overall migration numbers have dropped since the high of 2015.

Now that the Taliban are in power, there is every indication that those numbers will swell still further, as people have started selling property and talking about permanent exile.

Many Afghans interviewed in recent weeks said that they had crossed in large groups — sometimes hundreds strong — but that only a small number had succeeded in evading Turkish border guards. Thousands of Afghans were massed in the border region in Iran, they said.

As the globe’s recent violent upheavals have displaced millions, whether from Iraq, Syria or parts of Africa, the timing of the final chapter of the war in Afghanistan has left Afghans at the end of the line, and very likely with no recourse.

As in Europe, the public mood in Turkey has turned against immigrants and refugees, sometimes resulting in violence, such as knife fights and a recent attack on Syrians’ homes in the capital, Ankara. The scale of the pushback by Turkey has increased dramatically since last month, said Afghans, human rights monitors and even government officials.

For President Recep Tayyip Erdogan of Turkey, the burden of hosting so many refugees — 3.6 million Syrians and more than 300,000 Afghans, among others — has become a burning political issue, especially as the Turkish economy has worsened. He has made clear he has no intention of opening the door to more Afghans.

When photographs emerged on social media of columns of Afghan migrants walking through Iran toward Turkey in recent weeks, opposition politicians accused Mr. Erdogan of negotiating a deal with the European Union, as he had done for Syrian refugees, to host the growing number of Afghans who are arriving.

Mr. Erdogan has often used the migrant threat as leverage in negotiations with the European Union, while his police have long conducted ruthless operations to control the numbers of migrants and perceptions at home. But he has also railed against Western nations for expecting less developed countries to bear the migrant crisis.

“Europe, which has become a center of attraction for millions of people, cannot stay out of this problem by firmly closing its borders in order to protect the safety and prosperity of its citizens,” he said in a televised speech last week. “Turkey has no duty, responsibility or obligation to be Europe’s refugee depot.”

Mr. Erdogan warned Chancellor Angela Merkel of Germany by telephone Sunday that his country “will not be able to shoulder the additional burden” in the event of a fresh wave of migration from Afghanistan. Turkey, he reminded Ms. Merkel, “has already taken in five million refugees.”

Afghans interviewed in Van said Turkey had tightened security along its border with a widespread and often violent police operation in recent weeks, turning away Afghans regardless of their requests for asylum.

In a single operation in July, more than 1,400 Afghans who had crossed into Turkey were rounded up and pushed back by Turkish border guards and military police, according to a statement from the office of the governor of Van.

Hundreds more, including women and children, have been detained in towns across eastern Turkey as they have tried to make their way deeper into the country.

Such expulsions are against the international convention on refugees, said Mahmut Kacan, a lawyer in Van who specializes in refugee and asylum cases.

Few Afghans know their rights under international law, he said, but Turkey does not abide even by its own laws, since migrants should be entitled to an appeal process before being deported.

Who are the Taliban leaders? These are the top leaders of the Taliban, men who have spent years on the run, in hiding, in jail and dodging American drones. Little is known about them or how they plan to govern, including whether they will be as tolerant as they claim to be.

What happens to the women of Afghanistan? The last time the Taliban were in power, they barred women and girls from taking most jobs or going to school. Afghan women have made many gains since the Taliban were toppled, but now they fear that ground may be lost. Taliban officials are trying to reassure women that things will be different, but there are signs that, at least in some areas, they have begun to reimpose the old order.

The Afghan family detained recently in the Van bus station was sent to a migrant facility and then was expelled back to Iran within days without due process, according to another Afghan, Abdul Wahid, who was detained at the same time.

In an interview before they were apprehended, the husband, Najibullah, 30, said they had made the arduous three-day trek with their 1-year-old twins into Turkey three times in recent weeks, only to be pushed back each time. The children had dramatically lost weight, he said.

His wife, Zeineb, 20, seemed badly shaken by the experience. “It would have been better to stay and die in Afghanistan than make this journey,” she said. They only gave their first names out of fear because of their undocumented status in Turkey.

The family, ethnic Uzbeks, had left home two months ago partly because the Taliban had seized control of their district in northern Afghanistan. “We had nothing,” Najibullah said. “They would order us to prepare them food. We could barely feed ourselves.”

Mr. Wahid was deported after spending four days in a migrant center, and sent a telephone message from Iran about what had happened.

Mr. Wahid had been living in Turkey and had come to Van to help his wife and two children try to enter the country from Iran. They had crossed the border 10 times in recent weeks to try to join him in Istanbul, where he was working in a textile factory, he said, but each time they entered Turkey, police caught them and sent them back. Once they were detained in Tatvan, a town more than a hundred miles from the border, he said.

“My wife asked them for asylum,” he said. “She said she wanted to send her children to school. Initially they said OK, then they deported her.”

Many of the Afghans interviewed said that they were looking for economic opportunity but that the Taliban advances and killings had pushed them to leave. Two out of a dozen interviewed over two days recently said they had family members who had been killed by the Taliban.

A teenager, Ilias, 15, wearing a bright yellow T-shirt and black jacket, said he had fled with three friends from his home village in Daikundi in central Afghanistan after his father was killed by advancing Taliban forces three or four months ago.

“The Taliban started to attack our area and people started to defend my village, and that’s when my father was killed,” he said. “We three are from the same area and we managed to get out,” he said, gesturing to his companions.

They were stopped by the Taliban on the way and questioned, robbed by human traffickers in Iran, and arrived in Turkey without food or money to continue their journey.