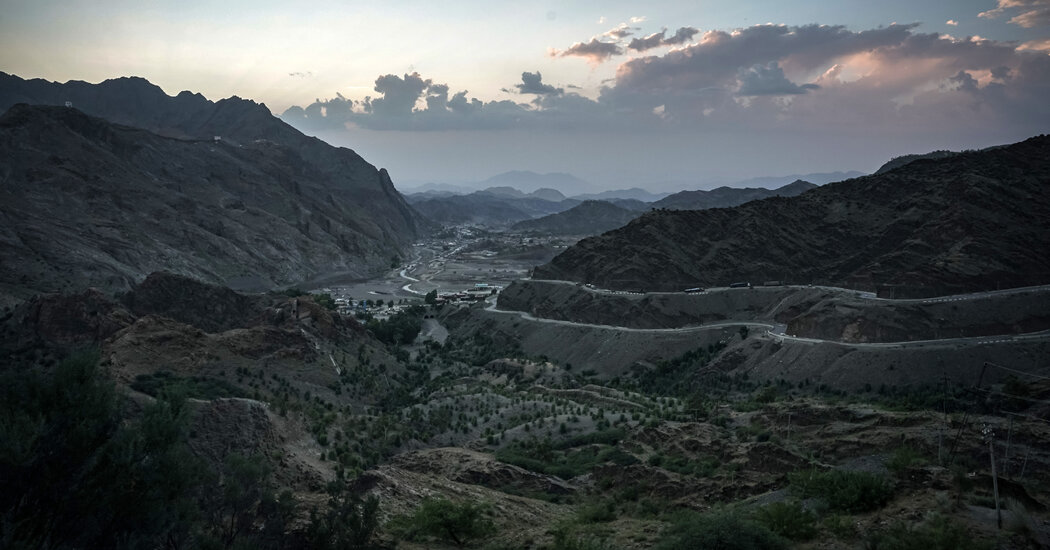 TORKHAM, Pakistan — The Taliban, thankfully, didn’t figure out Mohammad was a police officer.

Mohammad, 55, had worked for years in Laghman Province east of Kabul, where chasing militants was part of the job. Then the Taliban seized control of Afghanistan. They killed his boss. Mohammad figured he and his family were next.

“We left Afghanistan mainly to protect our lives,” said Mohammad, who insisted on being identified only by his first name to protect his extended family from reprisals. On Aug. 16, he, his wife and their five children reached Spin Boldak, a town on the Afghanistan side of the border, before crossing to Chaman on the Pakistan side. To get there, they navigated watchful Taliban and paid Pakistan security forces $900 in bribes.

“On the highway, Taliban fighters were stopping and searching travelers,” said Mohammad. “But, luckily, they did not recognize me because, maybe, I was a low-ranked cop.”

The Pakistan authorities are watching worriedly to see whether more refugees like Mohammad and his family come pouring over the border. The government is expecting as many as 700,000 at a potential cost of $2.2 billion as the authorities set up camps and ways to track and feed them.

The new arrivals will present political problems for Pakistan’s leaders. The country already houses one of the world’s largest populations of refugees. The police and many members of the public treat them like criminals or potential terrorists, according to human rights groups. Already, regional and ethnic leaders are telling the government to turn them away.

One of them is Ayaz Latif Palijo, a leader among the Sindhi ethnic group in Sindh Province, where the city of Karachi is based, and who has organized protests against new refugees and hunger strikes among members of his political party. Sindh is already home to refugees from Afghanistan, Bangladesh and Myanmar, some of whom have been there for decades.

“Sindh is not an international orphanage,” Mr. Palijo said, “and we will not allow more Afghans to live here.”

In Balochistan Province, officials said on Wednesday that they recently deported more than 500 Afghan refugees, including women and children, for entering the country illegally after the Taliban takeover.

Pakistan’s intelligence service supported the Afghan Taliban, and many of the group’s leaders lived openly in the country. (Pakistan officials say their sway over the Taliban has been exaggerated.) Among the Pakistan public, many see the Taliban as righteous Islamic warriors who defeated American forces who brought years of war with them.

But the Taliban’s cruelty, both during their 1996-2001 rule of the country and when they were insurgents, contributed to the tide of refugees that spilled into Pakistan. The country officially hosts 1.4 million refugees, according to the United Nations, though experts say hundreds of thousands of undocumented immigrants live there, too.

The migration issue has at times added tension along the border. Already, on Wednesday Pakistan’s military fired artillery rounds over the border, citing firing from Afghanistan that killed five soldiers — the latest in long-running hostilities as Pakistan forces target suspected insurgents hiding on the other side.

Lt. Gen. Faiz Hameed, Pakistan’s powerful intelligence chief, listed terrorism and refugees among Pakistan’s top concerns at a meeting with Taliban leaders in Kabul over the weekend, according to Fawad Chaudhry, the Pakistani information minister.

The number crossing the border is unclear. So far, say international aid groups and Pakistan officials, the tide of refugees seems to be weaker than expected. Violence in Afghanistan has ebbed. Some are waiting to see what kind of rulers the Taliban will be. And Pakistan has tightened its border controls, including building a 1,600-mile border fence in recent years.

At Torkham, the dusty border crossing about 140 miles east of Kabul, the Pakistani authorities appeared to be keeping the flow of refugees under strict control. Only small groups of people crossed the border, where only Pakistan citizens and Afghans with visas are allowed to cross. Hundreds of empty container trucks sat idle on the Pakistan side, evidence of a sharp drop in trade because of the war.

Many of the refugees belong to the Hazara ethnic group, which has suffered persecution at the Taliban’s hands.

“We will not go back to Afghanistan now because we are targets of both Taliban and the Islamic State, which considers us infidels,” said Sher Ali, 32, a Hazara and a refugee from Kabul who arrived in Karachi with his ill 55-year-old mother and a younger sister. Border personnel at Chaman-Spin Boldak, he said, allowed them to enter Pakistan on humanitarian grounds.

Many refugees face discrimination. They are often portrayed in Pakistan’s news media as drug peddlers and criminals. And, increasingly, terrorists.

A group called the Pakistan Taliban has claimed responsibility for several deadly attacks over the years, prompting a furious crackdown from the Pakistani authorities. Many of the group’s leaders have taken shelter in Afghanistan, prompting people in Pakistan to regard the refugees with suspicion. After a terror attack in Pakistan, Afghan settlements are often raided by law enforcement, with young men rounded up, detained or beaten en masse, rights groups say.

“Harassment and exploitation on the part of law enforcement agencies is a product of underlying perceptions of Afghans as violent, dangerous and suspicious,” said Zoha Waseem, a sociology professor at the University of Warwick and an expert on policing. “Refugees are therefore viewed with suspicion and seen as an alleged threat to the security of the nation-state. This makes an entire community, including refugee children, at risk of state harassment.”

The skepticism had left Afghan refugees in a state of uncertainty. Though Pakistan’s law allows those born there to get citizenship, the claims of Afghan children are generally not recognized. Imran Khan pledged to recognize their citizenship after he became prime minister in 2018, but he backed off following a backlash from politicians and the country’s powerful military.

For many, the biggest fear is deportation. In 2016, the Pakistani authorities forced more than 500,000 people to return to Afghanistan, according to Human Rights Watch. The group warned that the move risked adding to a population of hundreds of thousands of people in Afghanistan rendered essentially homeless by poverty and conflict.

The Taliban’s vengeful ways add to the risks. While the country’s new leaders have tried to strike a moderate tone, reports of reprisals against former members of the security forces and other Taliban opponents have trickled out of the country.

“I have no plans to go back to the Taliban’s Afghanistan,” said Khan, once a journalist in Kabul. He wanted to be identified only by his surname to protect his wife and two children, who remain in the Afghan capital.

Anticipating a Taliban victory by October, Khan had planned to get passports for his wife and two children to move to Pakistan. Kabul’s sudden fall last month spoiled those plans.

“Taliban has a list of journalists who were critical of the movement in their reporting,” said Mr. Khan, who had a visa to enter Pakistan, “and I am sure I am among them.”

In Camp Jadeed, a makeshift home for Afghan refugees on Karachi’s outskirts, residents said they had no plans to go back despite the temporary nature of their surroundings.

“With Taliban’s recapturing, a new era of uncertainty and fear starts in Afghanistan,” said Jan Ali, an Afghan in his 60s who arrived in Pakistan in 1980 and makes a living selling secondhand carpets.

He has seen arrivals from decades of conflict. “But the only good thing, this time,” he said, “is that bloodshed was avoided to gain Kabul’s throne.”