Home World Arrests Shake Up a Soccer Scene in Serbia Ruled by Gangsters and...
World 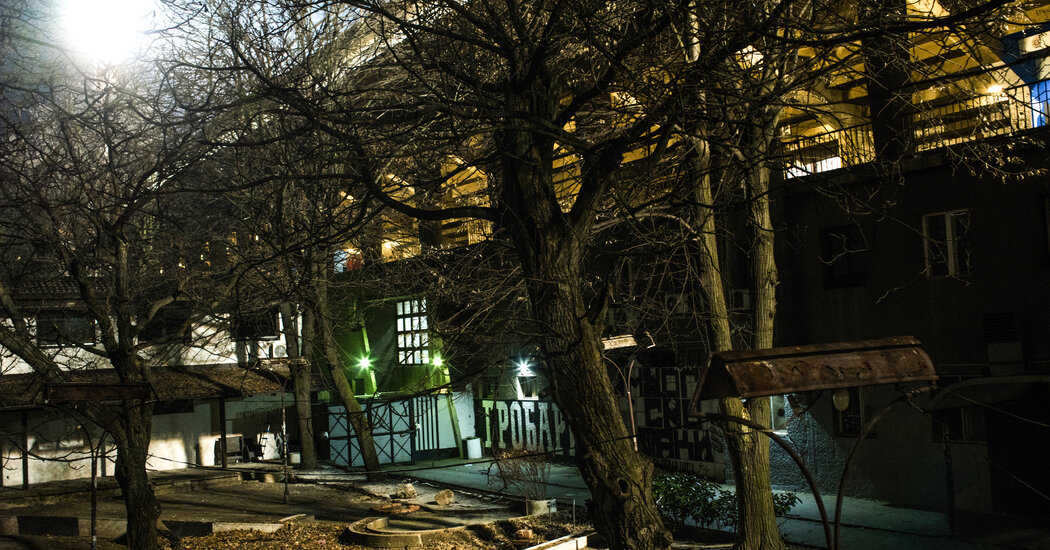 BELGRADE — Shortly after arresting a man suspected of leading a criminal gang last month in connection with a series of killings involving beheadings and torture, Serbian police officers raided what they believe was the band’s secret lair: a bunkerlike room in the bowels of a stadium used by Partizan Belgrade, a storied soccer team in the Serbian capital.

The room, located in a defunct restaurant under the stands, has been sealed off as a crime scene after investigators hunting for evidence of ties between soccer hooligans and organized crime found weapons there.

The wall outside is daubed in white and black paint with the name that the Partizan fans use for themselves: “the Gravediggers.”

The name is well deserved. Serbian soccer fans, at least those who in prepandemic days used to cram into the rowdy south stands of Partizan’s stadium and the equally anarchic north side of the arena used by its Belgrade archrivals, Red Star, have long had a reputation for extraordinary violence.

A French fan who traveled to Belgrade in 2009 to cheer on his team, Toulouse, in a game against Partizan died after being beaten with iron bars and bicycle chains. In that case, 14 Partizan fans were convicted of murder.

The violent tendencies have also made Serbian soccer fans, particularly those of the two rival Belgrade teams, a powerful force on the street and in the country’s tumultuous politics.

The question now consuming Serbia is what led to the arrest last month of Veljko Belivuk, who is suspected of being a gangster and the leader of a group of violent Partizan fans. He has long operated with impunity, and is reported to have had close ties to the government and security forces.

In the government’s telling, Mr. Belivuk is a brutal mobster whose arrest signals a determination to rein in the criminal bands that helped fuel the horrific violence of the Balkan wars of the 1990s, assassinated a reform-minded prime minister in 2003 and have hobbled Serbia’s efforts to become a normal European country.

“Our message is that we’re done with this gang,” President Aleksandar Vucic, who is a dedicated Red Star fan and has admitted to brawling at games in the past, declared on March 6 after state television aired grisly images of a beheaded corpse and the mangled body of a young man with a Red Star tattoo on his leg — purported victims of Mr. Belivuk’s gang.

Investigators have also linked Mr. Belivuk to a decade-long drug war between two rival criminal clans over control of a lucrative trafficking route across the Adriatic Sea from Serbia’s neighbor, Montenegro, to Western Europe.

The government’s version of why Mr. Belivuk and 16 of his confederates were arrested, however, has dismayed those who follow the workings of Serbian soccer clubs and their fans, the most violent of which are known as “ultras.”

“Our soccer hooligans are controlled by the state — they do what the state tells them to do,” said Mirko Poledica, the president of the Union of Professional Football Players “Independence,” Serbia’s main association of players.

Violent fans like Mr. Belivuk, he said, are such a fearsome force that controlling them has always been a priority for any government that wants to avoid trouble and stay in power.

Mr. Belivuk was a tool of the government, he said, used to help break up opposition rallies and provide street security for Mr. Vucic’s inauguration in 2017.

Ana Brnabic, Serbia’s prime minister, said in an interview that Mr. Vucic, far from being Mr. Belivuk’s partner, was his target. “I have credible information that his life was in danger,” she said. “It was high time to act because of all the threats made by organized crime.”

But she conceded that criminal gangs had developed “strong links” to state and security structures, and that these were now being investigated and uprooted. “Obviously, the mafia would not be so strong if it did not have support in the government,” she said.

Adding to a widespread view that Mr. Vucic is hiding something, however, has been a vicious vilification campaign in pro-government media outlets directed at those who have challenged the president’s story of a straightforward crackdown on organized crime.

Ms. Brnabic denied the campaign was orchestrated by the government.

Also smeared by the tabloids has been Krik, a highly respected group of investigative journalists that has reported for years on links between government officials and Mr. Belivuk’s gang.

Stevan Dojcinovic, Krik’s editor in chief, said that organized crime in Serbia — and government officials — had long been tied to the “brutal force of nature” provided by soccer hooligans.

“Politicians have always been afraid of our hooligans. No matter who is in power they always form a partnership with them,” he said.

The difficulties of partnering with the hooligans, however, was made evident by the demise of Serbia’s former president, Slobodan Milosevic. Under his rule in the 1990s, hooligans flooded into the ranks of state-sponsored paramilitary groups that spread mayhem in Bosnia and Kosovo after the breakup of Yugoslavia.

That Mr. Milosevic, for whom Mr. Vucic served as information minister and whose security services worked closely with hooligans and criminals, was in serious trouble became clear when Red Star’s ultras started chanting “Slobodan Kill Yourself!” at games. (His parents had both died in suicides.)

Mr. Milosevic lost power in 2000 after the ultras led students and other protesters in storming the Parliament building in Belgrade.

When Yugoslavia, of which Serbia was then a part, began to unravel in the late 1980s, an early sign of impending war came in May 1990 when Red Star traveled for a game in Zagreb, the capital of the neighboring Yugoslav republic of Croatia. The game was suspended after rival fans staged a violent melee and set fire to the stadium.

Among the Red Star supporters who had traveled to Zagreb for the match was Mr. Vucic, who later boasted that he “often fought” at games.

Mr. Poledica, the chief of the soccer players’ association, said: “Our politicians always fear the stadium and its terrible power. They know that any dissatisfaction in the stadium can quickly spread to the street. They want to control it.”

He added that he did not know why the authorities had turned against Mr. Belivuk but speculated that Mr. Belivuk and his followers had gone too far. “Everyone knew they were violent, that they beat people and made threats. But cutting off heads?”

Mr. Belivuk’s lawyer, Dejan Lazarevic, said that his client had not yet been formally charged and that there was no evidence to support the accusations of murder, kidnapping and other serious crimes made against him by officials.

Mr. Vuletic, the professor, said that Mr. Belivuk and a hoodlum known as “Sale the Mute,” who has since been killed, first took control of the south part of Partizan’s stadium soon after Mr. Vucic became prime minister in 2014, and began beating up anyone chanting insults against him.

Suspicions that Mr. Belivuk had powerful friends in the government, or at least law-enforcement, have been growing since 2016, when he was arrested on murder charges but then released after DNA and other evidence against him either disappeared or had to be discarded because of tampering.

Krik, the investigative reporting group, later published photographs showing a member of Serbia’s gendarmerie, a police force, attending soccer games with Mr. Belivuk. At the time, the officer was in a relationship with a senior official responsible for the Interior Ministry.

This partnership with the government, said Mr. Dojcinovic, the Krik editor, broke down last year for unknown reasons, possibly because of an internal rift in Mr. Vucic’s governing Serbian Progressive Party, some of whose members have been caught up in the investigation into Mr. Belivuk.

Among those taken in for questioning by the police in connection with the case is Slavisa Kozeka, the president of the Football Association of Serbia. Mr. Kozeka, a senior official in the governing party, was earlier an activist in a far-right nationalist outfit that was led for years by a convicted war criminal.

All the bad publicity has infuriated peaceable Partizan fans like Vladimir Trikic. Walking around the central Belgrade district of Dorcol, he showed off murals of artists, theater directors and poets who have cheered on the club. Partizan, though closely tied to the former Yugoslav Army, he said, has “always been a team for intellectuals.”

For ordinary Partizan fans, Mr. Belivuk was never really a supporter but an impostor sent by Mr. Vucic to control and discredit his own team’s bitter rivals.

At a Partizan game in Belgrade last week, held before mostly empty stands because of the pandemic, Zoran Krivokapic was one of a handful of fans who managed to get into the stadium. He said that he had attended every home game for 47 years and blamed the rise and fall of Mr. Belivuk on what he said was a personal vendetta against Partizan by Mr. Vucic, the president.

“He wants to destroy Partizan and let Red Star rise,” he said.

Facebook
Twitter
Pinterest
WhatsApp
Previous articleMore Steals, No Shifts and Robot Umps: ‘Our Fans Want the Action’
Next articleThere Is No Rung on the Ladder That Protects You From Hate