Home World As Israel Reopens, ‘Whoever Does Not Get Vaccinated Will Be Left Behind’
World

As Israel Reopens, ‘Whoever Does Not Get Vaccinated Will Be Left Behind’ 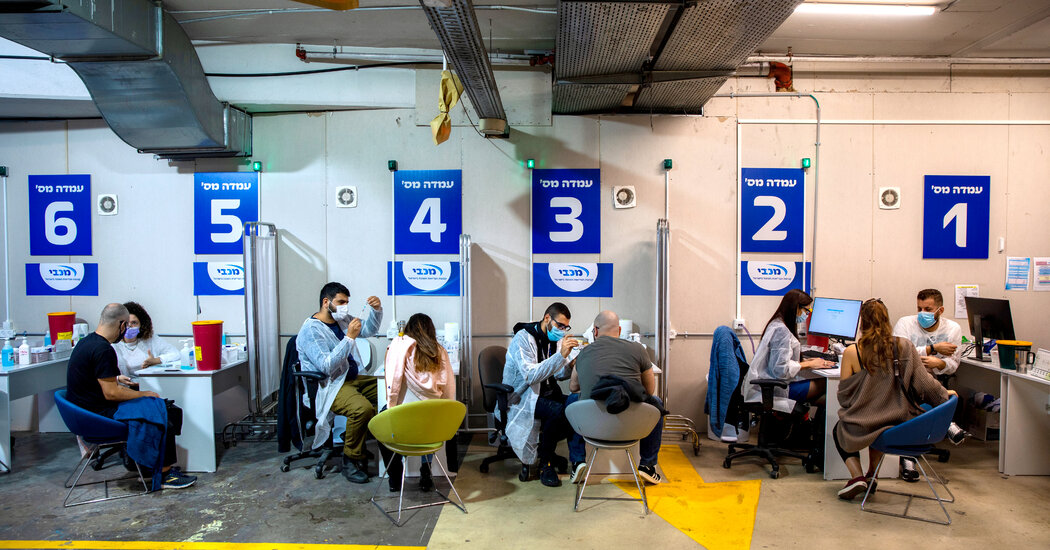 BAT YAM, Israel — Israel has raced ahead with the fastest Covid vaccination campaign in the world, inoculating nearly half its population with at least one dose. Now, the rapid rollout is turning the country into a live laboratory for setting the rules in a vaccinated society — raising thorny questions about rights, obligations and the greater good.

Prime Minister Benjamin Netanyahu’s cabinet voted this week to open shopping malls and museums to the public, subject to social distancing rules and mandatory masking. For the first time in many months, gyms, cultural and sports events, hotels and swimming pools will also reopen, but only for some.

Under a new “Green Badge” system that functions as both a carrot and a stick, the government is making leisure activities accessible only to people who are fully vaccinated or recovered starting Sunday. Two weeks later, restaurants, event halls and conferences will be allowed to operate under those rules. Customers and attendees will have to carry a certificate of vaccination with a QR code.

Israel is one of the first countries grappling in real time with a host of legal, moral and ethical questions as it tries to balance the steps toward resuming public life with sensitive issues such as public safety, discrimination, free choice and privacy.

“Getting vaccinated is a moral duty. It is part of our mutual responsibility,” said the health minister, Yuli Edelstein. He also has a new mantra: “Whoever does not get vaccinated will be left behind.”

The debate swirling within Israel is percolating across other parts of the world as well, with plans to reserve international travel for vaccinated “green passport” holders and warnings of growing disparities between more-vaccinated affluent countries and less-vaccinated poor ones.

Israel’s central government — eager to bring the country out of its third national lockdown without setting off a new wave of infections — was spurred into action by local initiatives. Chafing under the country’s lockdown regulations, an indoor shopping mall in the working-class Tel Aviv suburb of Bat Yam threw its doors open last week for customers who could prove that they had been vaccinated or had recovered from Covid-19.

In Karmiel, the mayor made a similar decision to open his city in the northern Galilee region for business. His office began processing requests from employers who could verify that all of their employees had received the requisite two vaccine doses or had recovered from the virus.

And in other cities, mayors wanted to bar unvaccinated teachers from classrooms while some hoteliers threatened unvaccinated employees with dismissal.

Dr. Maya Peled Raz, an expert in health law and ethics at the University of Haifa, defended some limits on personal liberties for the greater good. Employers cannot force employees to get vaccinated, she said, but they might be allowed to employ only vaccinated workers if not doing so could harm their business.

“That may involve some damage to individual rights, but not all damage is prohibited if it is well-balanced and legitimate in order to achieve a worthy goal,” she said. “It’s your choice,” she added of leisure activities. “If you are vaccinated, you can enter. As long as you aren’t, we can’t let you endanger others.”

Four million Israelis — nearly half the population of nine million — have received at least one dose of the Pfizer vaccine, and more than 2.6 million have gotten a second dose. But about two million eligible citizens aged 16 or over have not sought vaccines. The average number of new daily infections is hovering around 4,000.

The speedy vaccination program in Israel contrasts sharply with the situation in the occupied territories, where few Palestinians have received even one dose. The disparity has provoked fierce debates about Israel’s ethical and legal obligations to the Palestinians, as well as the potential health risk to Israelis of not vaccinating them.

Mr. Edelstein, the health minister, said on Thursday that vaccination would not be compulsory in Israel. But his ministry is proposing legislation that would oblige unvaccinated employees whose work involves contact with the public to be tested for the virus every two days. And he is promoting a bill that would allow the ministry to identify unvaccinated people to the local authorities.

Local authorities and volunteers have been trying to lure people to vaccination centers with offers of free pizza, Arabic sweets and, in the ultra-Orthodox city of Bnei Brak, bags of cholent — a slow-cooked stew traditionally prepared for the sabbath.

Yet getting vaccinated remains voluntary and not everybody is rushing to it.

Ofek Hacohen, 34, a manager of vacation rentals in Jerusalem, said he believed in a natural approach to a healthy body and insisted that the risk posed by the virus — which he called “a flu” — had been exaggerated. He added that he did not trust the vaccine’s safety.

He said he did not know what he would do if legislation was introduced limiting his options.

“But I won’t get vaccinated. I’ll surely participate in demonstrations. I believe I won’t be alone,” he said, adding, “I can survive without going to the theater, to soccer matches or to a restaurant. It’s annoying but what can I do?”

Concerts and restaurants are luxuries that people can more easily forgo. But the questions become more pressing and contentious when it comes to the rights of employers and workers.

The rights of teaching staffs have come under particular scrutiny as some in-person classes reopen. A quarter or more of Israel’s teachers have not sought a first dose, a situation that critics say poses a potential danger to pupils under 16, who are too young to be vaccinated. Some health workers have also refrained from being vaccinated.

After a number of city mayors threatened to bar unvaccinated teachers from their classrooms, the deputy attorney general clarified that they did not have the authority to do so without new legislation.

Dr. Peled Raz said the temporary emergency law governing Israel’s response to the virus would be easier to amend with regard to health workers than to others because of potential harm to themselves and patients, adding that would be justified.

But two rights organizations, the Association for Civil Rights in Israel and the Worker’s Hotline, said they had already received complaints from other unvaccinated workers. The groups wrote a letter to the attorney general this month demanding that he issue a clear opinion and said that under existing law an employer may not demand information from workers regarding their vaccination status.

“The first problem is that there is no policy,” said Gil Gan-Mor, the director of the civil and social rights unit at the Association for Civil Rights in Israel. “When the government is not working fast enough, we see too many private initiatives.”

Striking a balance between competing rights and interests remains a matter of debate, he said, and requires a broad discussion in Parliament.

“To what degree is it appropriate to pressure and coerce when the decision-making process surrounding the vaccine is kept hidden, in the dark and confidential?” he wrote, noting that he does not deny the seriousness of the coronavirus or the effectiveness of the Pfizer vaccine.

He also pointed to the low public trust in the government and what he called drug companies’ “huge financial interest.”

In Karmiel, City Hall gave at least 20 businesses a local version of a Green Badge to put in their windows, according to Eli Sade, the director of the mayor’s office. All who entered were required to show that they had been vaccinated or had recovered from the virus. But police officers told store owners to close because they were breaking the law.

The shopping mall in Bat Yam, which wanted customers to prove they had been vaccinated, soon dropped the requirement for showing a green passport at the entrance and went back to equipping the guards with temperature guns.

Inside, the few stores that opened had created their own entry policies. One chain followed basic social distancing regulations while another required a vaccination certificate. Sportswear and lingerie stores operated a “takeout” service for customers who stood at the door.

Haifa Zeinab, 20, who was working in a Japanese-style home wear and gift store, said she did not plan to be vaccinated because an aunt had been overcome by dizziness after both of her doses. If she was told not to come without a green passport or a negative test every two days, she said with a shrug, “So I won’t come.”