Attica Summer Camp, Outside Melbourne, Is a Dreamy Distraction 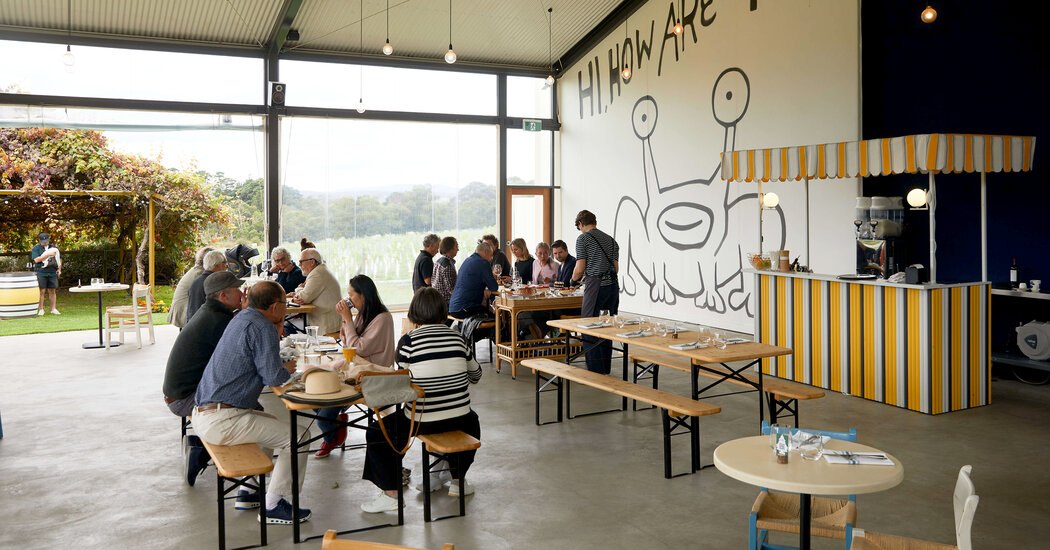 MELBOURNE, Australia — This past summer in Australia had a dreamlike emotional dissonance, like pantomiming normalcy while the outside world remained overrun with illness and death. Everyone I know reads the news, speaks to loved ones in less-safe places and feels guilty that everything here is so very nice. We go to the beach, we camp and, yes, we eat in restaurants.

I’ve been eating at Attica Summer Camp, a four-month pop-up at a winery in the Yarra Valley of Victoria. It’s one of many projects dreamed up by the chef Ben Shewry since his much-lauded restaurant Attica was forced to shut down last March as part of Victoria’s initial pandemic lockdown.

Summer Camp is about an hour’s drive from central Melbourne, with suburbia giving way to lush green fields and forest. The restaurant sits atop a hill overlooking sloping vineyards, and most of the seating is on an outdoor patio. Trellised vines create a canopy — basically a room made of leaves — where cushions and low tables invite patrons to loll with a glass of wine. A sign reads, “They kissed under the tree at summer camp.”

There is so much here that captures the exact mood of this strange Australian summer. The restaurant is fleeting, it is dreamy, it feels not quite real. It is nostalgic and fun and looks backward to familiar comforts rather than forward to an uncertain future. And it is almost gone — Attica Summer Camp will close May 31.

The vibe of the place is almost punk-rock-grandma. On one wall is a giant, looming mural of the cover of the cult singer-songwriter Daniel Johnston’s album “Hi, How Are You.” Underneath it, you can eat Hasselback potatoes, grilled Scotch eggs and fiddly, delicious dishes like hot smoked salmon over a creamy dill sauce, and smooth chicken liver pâté topped with cherries. It is a prim ladies’ lunch served on flowery china, complete with a dessert cart carrying crystal goblets full of a fluffy strawberries-and-cream concoction called “German cloud.” The soundtrack ranges from Nancy Sinatra to Flight of the Conchords.

Summer Camp was born of the pandemic and the need to diversify a fine-dining business, but it was not Mr. Shewry’s first pivot: Attica To-Go allowed the restaurant and its staff to make it through much of last year. It included takeaway options that mimicked the restaurant’s usual complex tasting menus and wine pairings — as well as its high cost — but also more affordable family-style dinners.

“The great thing about the lockdown is that it drastically and immediately changed our entire customer base,” Mr. Shewry said. “We were serving people we’d never served before.”

This turn to takeout happened in restaurants around the globe, and I’ve seen many chefs at high-end restaurants find a newfound passion for feeding a wider variety of customers. Last May, I spoke with a thrilled René Redzepi about how local people lined up for Noma’s burger and wine bar, now a permanent feature, after Denmark’s borders closed.

When the lockdown in Melbourne ended in November, Attica’s takeaway business fell by 90 to 95 percent as Melbournians gleefully returned to dine-in restaurants. Hamstrung by density rules that would have limited its small dining room to 20 customers a night, the restaurant initially remained closed. Its usual nightly capacity, about 60 customers, is barely enough to keep the restaurant solvent in normal times. So, even though Attica eventually reopened in December at partial capacity, Mr. Shrewy had already begun plans for Summer Camp.

The new restaurant would tap into customers’ desire to leave the city they’d been confined to for so many months. Unlike the elaborate tasting menus at Attica, this food would be casual, much of it cooked over rotisserie. While far from cheap, the price point is attainable for customers who could never afford the splurge of Attica, where the prix-fixe menu is $320 a person (about $250 in U.S. dollars).

If you came here expecting the kind of elaborate Australiana that Mr. Shewry usually serves, you’d likely be disappointed. This is the kind of food a very good cook might serve at a family gathering. But there are echoes of Attica. Pastrami with hot sauce reminded me of a plate of simple, thinly sliced pork I once had there, and a dish of thoroughly charred onions, topped with a heady gloop of blue cheese, was brilliant in its simplicity and wouldn’t seem out of place at a restaurant with loftier ambitions.

But beyond the menu, this is just a pleasant place to eat. And it feels both exactly right and somehow wrong for its time and place.

To be clear: I believe that we earned this lovely summer and the freedom that’s come with it, especially here in Victoria after long months of strict lockdown in order to achieve an almost Covid-free existence. Last summer the country was on fire. I refuse to reject the snippets of joy the current safety offers. But even as I grasp at that joy, I sense a kind of Uncanny Valley quality that makes everything seem like a pretty veneer.

If the mood for the last few months has been tenuously dreamy, the future is much less certain. Australia’s vaccine rollout lags far behind that of many other nations. The slightest breach of our hotel quarantine system for returning travelers could send us back into lockdown, or worse.

Mr. Shewry says there are no plans to bring Summer Camp back next year. Working this hard as a hands-on chef and owner is perhaps not healthy, he thinks. But he foresees the need for more side hustles and creativity to keep his staff and family fed.

Summer always ends, but I’m not sure I’ve ever felt the ambiguity of the cold season ahead as acutely as I do right now. So while Summer Camp lasts I’ll be there, scooping up fluffy strawberry cream from crystal bowls, taking my joy where I can get it.