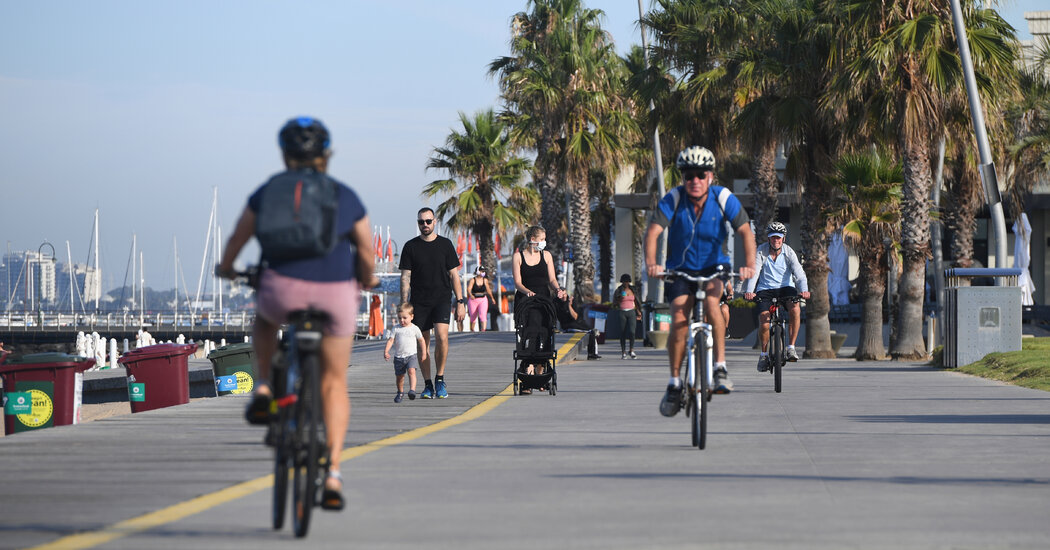 SYDNEY, Australia — Before the coronavirus pandemic surged, Drisya Dilin dropped her daughter off with her parents in India, expecting to bring her to Australia a month later. That was more than a year ago.

Now, any attempt to get the 5-year-old to Australia, where she is a permanent resident, brings a threat of jail time or large fines.

She’s one of about 8,000 Australians affected by an unprecedented travel ban that began on Monday, prompted by India’s record-breaking Covid outbreak. It is believed to be the first time that Australia has made it a criminal offense for its own citizens and permanent residents to enter the country.

“I never expected this to happen,” said Ms. Dilin, a hospital administrator who has tried several times to repatriate her daughter to Australia, including on a charter flight this month that was canceled.

“She is missing us badly,” she said of her daughter. “She’s still counting days, thinking she is coming.”

Much of the world has decided to cut off travel to and from India as it grapples with an uncontrolled outbreak that is killing thousands of people every day. But Australia, a continent with a strong preference for hard borders, has pushed isolation to a new extreme. No other democratic nation has issued a similar ban on all arrivals. Britain, Germany and the United States, for example, have restricted travel from India, but have exempted citizens and permanent residents, many of whom are rushing home.

Australia’s decision — announced quietly late Friday night by officials who said it was necessary to keep the country safe — has built into a medical and moral crisis.

Indian-Australians are outraged. Human rights groups have condemned the move as unnecessarily harsh and a violation of citizenship principles. Other critics have suggested that the policy was motivated by racism or, at the very least, a cultural double standard.

Australia’s latest move fits a pattern. The island has maintained some of the strictest border measures in the world since the pandemic began. No one can leave the country without official government permission. Coming home, even from a country with declining infection rates, often seems to require government connections, celebrity status or luck, along with $30,000 for a one-way plane ticket.

In the case of India, Australia’s already opaque, unequal and selective policy — based in part on how many people can be moved through for 14-day hotel quarantine — has become absolute. It means keeping thousands of Australians in a place where coronavirus case numbers have skyrocketed; where hospitals have run out of beds, ventilators and medical oxygen; and where crematories are burning day and night amid a deluge of bodies.

Australian officials said the new restrictions — with penalties of up to five years in prison and nearly 60,000 Australian dollars ($46,300) in fines under Australia’s Biosecurity Act — would keep its hotel quarantine system from being overwhelmed.

“Fifty-seven percent of the positive cases in quarantine had been arrivals from India,” Foreign Minister Marise Payne said on Sunday. “It was placing a very, very significant burden on health and medical services in states and territories.”

But for Australians in India, the policy amounts to a stunning lack of concern.

“I thought our passports would look after us,” said Emily McBurnie, an Australian wellness coach who has been stranded in New Delhi since March 2020 and has been ill with Covid-19 for more than a month. She said that the Australian government owed more to its citizens, and added that if her health deteriorated, she feared she would not have access to oxygen or an intensive care bed.

Ms. McBurnie described the situation in India as akin to being in a war zone. She awakes to the choking haze of cremation smoke every morning, and she is picking fruit and collecting eggs from a local farm because it is next to impossible to purchase groceries because of the dwindling stock of fresh items.

In Australia, a country of 25 million that has fewer than 300 active Covid cases and where daily life has been nearly normal for months, most people support the strict border policy. In a recent poll by the Lowy Institute, which surveyed Australians before the Indian outbreak intensified, an overwhelming majority reported that they were happy with how Australia has tackled the pandemic. Only one in three surveyed said the government should do more to help Australians return home during the pandemic.

Natasha Kassam, the director of the Lowy Institute’s Public Opinion and Foreign Policy Program, said many Australians had been led to believe that those abroad should have come home by now or had chosen to stay where they were for personal or professional reasons.

The distinct lack of sympathy is tied, in part, to a lack of understanding, Ms. Kassam said. “More than a third of Australians were born overseas,” she said. “Closed borders means separated families.”

Human Rights Watch called Australia’s ban an “outrageous response” that undermined the concept of citizenship by denying people their right to return to their country.

The Australian Human Rights Commission said the travel ban “raises serious human rights concerns,” and the agency called on the government to show that the move was not discriminatory.

While India has the world’s highest number of new infections, it also has an enormous population. Its per capita infection rate is still lower than what it was in the United States and in many parts of Europe during their recent peaks.

Ms. Dilin, who lives in Sydney, where she works in the Covid-response unit of a hospital, said Australia’s treatment of people from India was clearly unfair.

“When the U.S. had the same issues, when the U.K. had many cases, they never stopped anybody from coming back,” she said.

Aviram Vijh, a Sydney-based designer from India and an Australian citizen, said the government’s actions smacked of prejudice.

“Clearly it’s a move that’s disproportionate,” Mr. Vijh said. His cousin, also an Australian citizen, is stranded in India with his wife and 3-year-old daughter, he added. Both his cousin and his wife have Covid-19.

“He’s very distressed,” he said of his cousin. “And there’s no path forward.”

Neha Sandhu, an Australian citizen who managed to return home from India in June, said that along with Ms. Dilin’s daughter, there were several other unaccompanied minors affected by the ban, many of whom had been visiting family in India and were now unable to return home.

“It is totally inhumane,” said Ms. Sandhu, who runs a Facebook group with more than 17,000 followers for those stuck in India.

Australian officials have argued, however, that the move was purely based on an assessment of the risk to public health. Australia’s chief medical officer, Paul Kelly, said the ban was temporary and is set to be lifted May 15, though it could also be extended.

Ms. Kassam, of the Lowy Institute, said the denial of a right to return for Australians in India was the first major test of a policy that most Australians have quietly accepted. She wondered if Australians would be more sympathetic once they knew the details.

“Australians have historically been supportive of tough border restrictions, though these questions have never been asked in relation to their own citizens,” she said. “The idea of fortress Australia is politically popular, but is untested in terms of criminalizing citizens for simply coming home.”