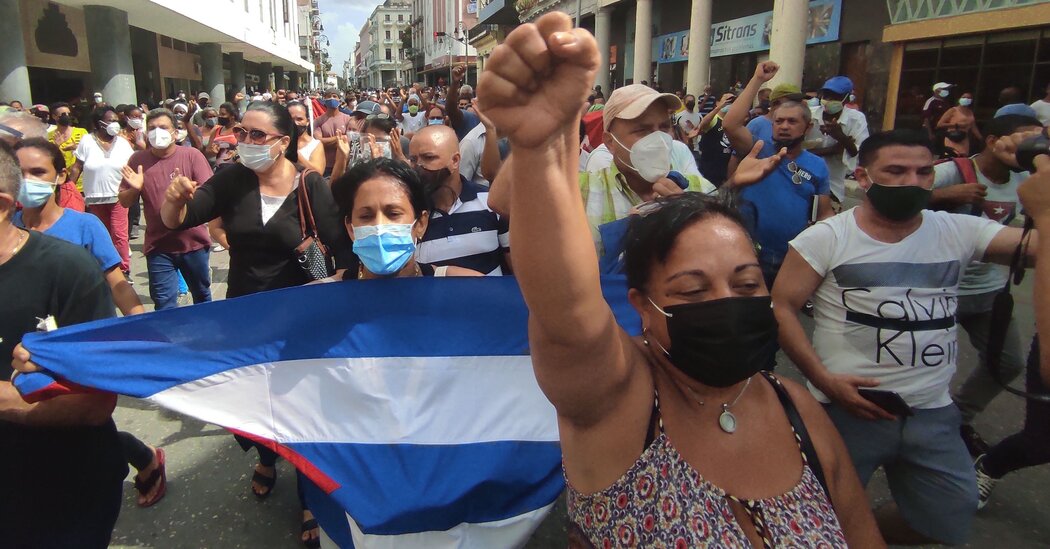 Others, however, blamed the American trade embargo for the protests and the deprivation driving them, a position the Cuban government took on Sunday when the demonstrations erupted.

“The truth is that if one wanted to help Cuba, the first thing that should be done is to suspend the blockade of Cuba as the majority of countries in the world are asking,” Mexico’s president, Andrés Manuel López Obrador, told reporters on Monday. “That would be a truly humanitarian gesture.”

But some Cuban activists in the United States, including those who oppose the embargo, were quick to challenge that narrative.

“There’s no food, there’s no medicine, there’s nothing, and this isn’t a product of the American embargo, which I do not support,” said Ramón Saúl Sánchez, president of the Movimiento Democracia advocacy group in Miami. He noted that the embargo does allow Cuba to buy food from the United States, though there are restrictions on financing that present significant barriers to the amount.

The size of Sunday’s demonstrations, which played out across the country, stunned longtime Cuba analysts. It reflects how dire life in Cuba has become in recent months, as the pandemic deprives the island of vital tourism revenue and strains the health system, the electricity grid falters, and the prices of basic food staples like rice and beans soar.

“There are tremendously long lines to get into supermarkets,” which these days only accept dollars, said Katrin Hansing, an anthropologist at Baruch College in New York who spent much of the past year doing research in Havana. “The same can be said for medicine. There is nothing: There is no penicillin, there’s no antibiotics, there’s no aspirin. There’s nothing, really.”

On social media, videos of protesters decrying the lack of electricity and basic supplies circulated widely on Monday.