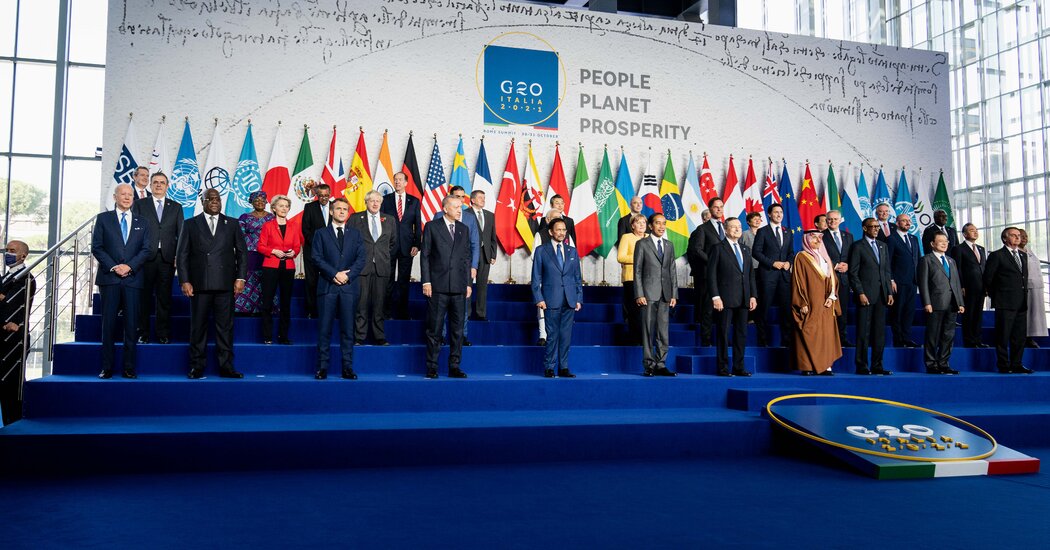 ROME — President Biden and other world leaders endorsed a landmark global agreement on Saturday that seeks to block large corporations from shifting profits and jobs across borders to avoid taxes, a showcase win for a president who has found raising corporate tax rates an easier sell with other countries than with his own party in Congress.

The announcement in the opening session of the Group of 20 summit marked the world’s most aggressive attempt yet to stop opportunistic companies like Apple and Bristol Myers Squibb from sheltering profits in so-called tax havens, where tax rates are low and corporations often maintain little physical presence beyond an official headquarters.

It is a deal years in the making, which was pushed over the line by the sustained efforts of Mr. Biden’s Treasury Department, even as the president’s plans to raise taxes in the United States for new social policy and climate change programs have fallen short of his promises.

The revenue expected from the international pact is now critical to Mr. Biden’s domestic agenda, an unexpected outcome for a president who has presented himself more as a deal maker at home rather than abroad.

Leaders hailed the agreement, which was negotiated by the Organization for Economic Cooperation and Development with nearly 140 countries signing on. “Today, every G20 head of state endorsed an historic agreement on new international tax rules, including a global minimum tax that will end the damaging race to the bottom on corporate taxation,” Treasury Secretary Janet L. Yellen, who joined Mr. Biden in Rome, said in a statement. “It’s a critical moment for the U.S. and the global economy.”

The agreement would impose a minimum 15 percent corporate tax rate in nearly every country in the world and punish the few holdouts who refuse to go along. The O.E.C.D. estimates the accord will raise $150 billion per year globally from tax-fleeing companies.

Such an agreement was not the top tax promise on Mr. Biden’s campaign agenda when he won the White House. But it has become the centerpiece of Mr. Biden’s efforts to raise corporate taxes back home, in order to fund a sprawling domestic agenda that includes investing in child care and fighting climate change, and to shift the global balance of power toward American workers.

But so far, Mr. Biden has failed to deliver on his pledge to raise the corporate income tax rate to 28 percent from 21 percent, partly undoing a rate cut signed by President Donald J. Trump, which lowered the rate from 35 percent. Mr. Biden announced a new plan to unite Democrats around that agenda on Thursday, shortly before leaving for Rome, but it did not include an increase in the corporate rate.

Instead, his framework contained two new 15 percent minimum taxes: one on the income American companies earn abroad, and one on the profits that large corporations report to their shareholders.

It also proposed penalties for companies that operate in the United States but keep their headquarters in countries that refuse to join the global deal and put in place a similar minimum tax.

The global minimum tax that Mr. Biden endorsed would be enacted separately by every country, in an attempt to eliminate havens with rock-bottom tax rates. Those companies that still use havens would face tax penalties in the United States.

Mr. Biden’s proposed domestic minimum tax would exclude a few deductions, like for clean energy, but otherwise try to raise money from companies that have reduced their tax bills through a variety of incentives in the code like deductions for investment.

The Biden administration estimates these measures, along with other changes to the international side of the tax code, will raise $350 billion in tax revenue over a decade.

Mr. Biden said he was confident that Democrats would unite behind the framework after months of turbulent negotiations. But it still has not passed Congress, and it is still unclear whether Mr. Biden has the votes.

Administration officials, who have made it their goal to end the global practice of profit-shifting, celebrated the international tax provisions this week and said they would be significant steps toward Mr. Biden’s vision of a global economy where companies invest, hire and book more profits in the United States.

But they also conceded that infighting among congressional Democrats had left Mr. Biden short of fulfilling his promise to make corporations pay their “fair share,” disappointing those who have pushed Mr. Biden to reverse lucrative tax cuts for businesses passed under Mr. Trump.

The framework omits a wide range of corporate tax increases that Mr. Biden campaigned on and pushed relentlessly in the first months of his presidency. He could not persuade 50 Senate Democrats to raise the corporate income tax rate to 28 percent from 21 percent, or even to a compromise 25 percent, or to eliminate incentives that allow some large firms — like fossil fuel producers — to reduce their tax bills.

“It’s a tiny, tiny, tiny, tiny, step,” Erica Payne, the president of a group called Patriotic Millionaires that has urged tax increases on corporations and the wealthy, said in a statement after Mr. Biden’s framework announcement on Friday. “But it’s a step.”

Business groups fought the president’s plans to raise corporate taxes, with the help of some Democrats in the House and Senate, and they denounced the increases included in Mr. Biden’s framework. The National Association of Manufacturers said in a statement that the domestic minimum tax would punish investment and “harm our industry’s ability to drive our economic recovery.”

Infighting among Democrats also jeopardized the Biden administration’s strategy to raise $700 billion in tax revenue without increasing tax rates at all. Plans to invest $80 billion in strengthening the I.R.S. and making banks to provide the agency with more information about the finances of their customers have faced fierce opposition from lawmakers, who are poised to jettison the bank reporting requirement.

The administration is continuing to negotiate with skeptical lawmakers to find a way to keep the I.R.S. policy alive. The Treasury Department said on Friday that even the additional enforcement money for the I.R.S. could still generate $400 billion in additional tax revenue over 10 years and said that was a “conservative” estimate.

An administration official said that the difficulty in rolling back the Trump tax cuts was the result of the fact that the Democrats are a big tent party ideologically with a very narrow majority in Congress, where a handful of moderates currently rule.

In Rome, Mr. Biden’s struggle to raise taxes more has not complicated the sealing of the international agreement. The move by the heads of state to commit to putting the deal in place by 2023 looms as the featured achievement of the summit, and Mr. Biden’s surest victory of a European swing that also includes a climate conference in Scotland next week.

Briefing reporters on Friday evening, a senior administration official, speaking on the condition of anonymity in order to preview the first day of the summit, said Biden aides were confident that world leaders were sophisticated and understood the nuances of American politics, including the challenges in passing Mr. Biden’s tax plans in Congress.

The official also said world leaders see the tax deal as reshaping the rules of the global economy.

The international tax agreement represented a significant achievement of economic diplomacy for Mr. Biden and Ms. Yellen, who dedicated much of her first year on the job to reviving negotiations that stalled during the Trump administration. To show that the United States was serious about a deal, she abandoned a provision that would have made it optional for American companies to pay new taxes to foreign countries and backed away from an initial demand for a global minimum tax of 21 percent.

For months, Ms. Yellen cajoled Ireland’s finance minister, Paschal Donohoe, to back the agreement, which would require Ireland to raise its 12.5 percent corporate tax rate — the centerpiece of its economic model to attract foreign investment. Ultimately, through a mix of pressure and pep talks, Ireland relented, removing a final obstacle that could have prevented the European Union from ratifying the agreement.

Some progressives in the United States say that Mr. Biden’s ability to follow through on his end of the bargain was a crucial piece of the framework spending bill.

“The international corporate reforms are the most important,” said Seth Hanlon, a senior fellow at the liberal Center for American Progress, who specializes in tax policy, “because they are linked to the broader multilateral effort to stop the corporate race to the bottom. It’s so important for Congress to act this year to give that effort momentum.”

Jim Tankersley reported from Rome, and Alan Rappeport from Washington.

Facebook
Twitter
Pinterest
WhatsApp
Previous articleThe COP26 Climate Talks Are Opening. Here’s What to Expect.
Next articleWhat if It Never Gets Easier to Be a Working Parent?