Broadcasting ‘the Shock, the Horror, the Outrage’ Live, Again and Again 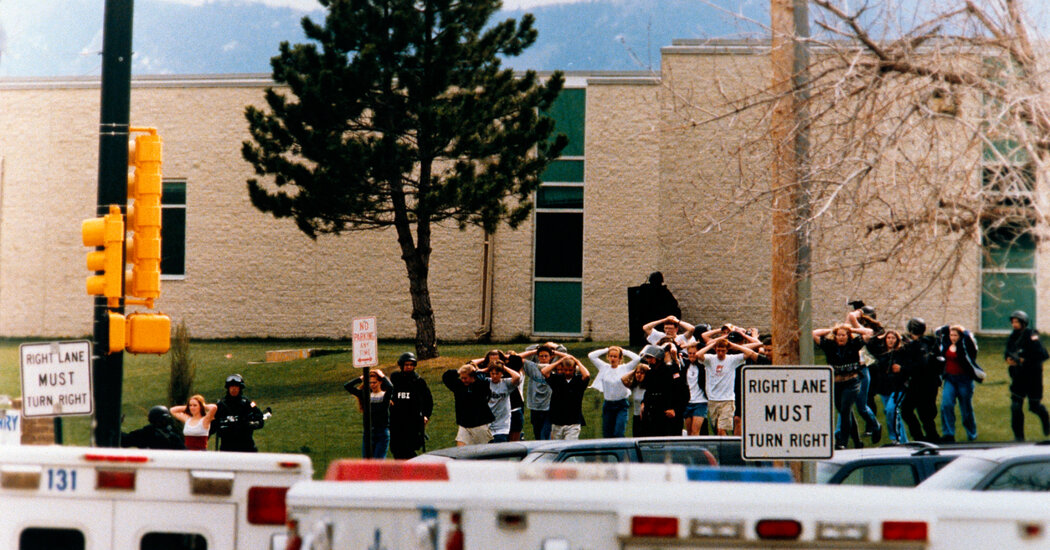 Last week, the CNN anchor Brianna Keilar found herself, for the second time in under a week, guiding viewers through the grim ritual of trying, and failing, to make sense of another mass shooting.

This time, it was 10 people dead at a grocery store in Boulder, Colo. Only a few days before, she had interviewed a survivor of the rampage at Atlanta-area massage parlors. In 2019, Ms. Keilar reported on the back-to-back shootings in El Paso, Texas, and Dayton, Ohio. In 2018, she spoke with relatives of students killed in the shooting in Parkland, Fla.

Broadcast journalists like Ms. Keilar, 40, have now spent the bulk of their reporting careers chronicling an unending, uniquely American horror show: the random gun massacre. She was CNN’s first journalist to arrive on the Virginia Tech campus in 2007. And she was a college freshman in 1999, watching the network’s coverage of a catastrophe at Columbine High School in Littleton, Colo.

All this was running through Ms. Keilar’s mind on Tuesday when, on-air, she paused after a correspondent’s report about Rikki Olds, the 25-year-old Boulder supermarket manager who was murdered. “I just wonder, can you count how many times you’ve covered a story like this?” she asked, her voice catching. “Have you lost count?”

“I just was having this awful feeling of déjà vu,” Ms. Keilar said in an interview, as she recalled the emotional broadcast, which was widely shared on social media. “If you’re covering this all the time, it’s possible to become numb. Because it becomes somehow unremarkable. This thing that is completely unacceptable, and should be extraordinary, becomes unremarkable.”

Journalists who have reported on multiple mass shootings say these moments are borne of sadness, frustration, and, for some, a feeling of futility in the face of a bleak kind of repetition. There is now a well-developed playbook that network correspondents and newspaper writers, including many New York Times reporters, turn to as they travel to yet another afflicted town. Talk to those who knew the victims and the gunman; attend vigils and funerals; gather information from the police and the courts. Balance necessary reporting on the attack with the potential that too much attention could be seen as glorifying the attacker.

“I call it the checklist: the shock, the horror, the outrage,” Lester Holt, the anchor of “NBC Nightly News,” said in an interview. “It’s all so familiar, and everybody knows the role to play and the questions to answer and how these things play out. Because sadly, they are very predictable.”

Mr. Holt, who has reported on shootings in El Paso; Las Vegas; Newtown, Conn.; Orlando; Santa Fe, Texas; San Bernardino, Calif.; and Sutherland Springs, Texas — a lengthy but by no means exhaustive list — said he was considering this month’s violence in Colorado and Georgia in light of the country’s slow return to normal from the coronavirus pandemic.

“Shootings,” he said, “are part of what normalcy looks like in this country, sadly.”

Journalists who reported on Columbine may not have considered how routine the event they were covering would become. For his book on the shooting, “Columbine,” Dave Cullen analyzed media coverage and found that in the immediate aftermath of the Littleton attack, network news shows broadcast more than 40 segments, CNN and Fox News notched historically high ratings, and The Times mentioned Columbine on its front pages for nearly two straight weeks.

Mr. Cullen, in an interview, said he believed that reporters had absorbed useful lessons since that first episode. “In 1999, everything we heard, we took as gospel; conjecture turned to fact very quickly,” he said.

After Columbine, news organizations were quick to formalize what Mr. Cullen called “myths” about the shooting: that the killers were bullied Goth kids taking revenge on popular jocks. Much of that narrative came from faulty sourcing, and Mr. Cullen said he saw journalists now being more cautious about reaching premature conclusions about an assailant’s motivations. “We take things with a grain of salt,” he said. “There was no salt in 1999.”

Reporters have learned to spend more time focusing on victims, rather than perpetrators. It was a shift that played out vocally on social media, as readers on Twitter implored news organizations to focus more on the people who were killed in the Atlanta shootings, as well as the uptick in crimes against Asian-Americans, rather than the gunman’s supposed motive.

Mr. Cullen recalled a journalism conference in 2005 where he raised the notion that reporters should refrain from focusing too much on the gunman. “I practically got shouted off the stage,” he said. “Now, when I mention the names of a shooter from an older case on television, I will get angry tweets from people. The public expectation has changed.”

Journalists are usually expected to set their feelings aside as they gather disinterested facts about a tragic event. But it’s not always possible, and Mr. Holt said that it was important to “report these things as unusual, as not normal.”

“I think it’s OK to be a little pissed off,” Mr. Holt, of “NBC Nightly News,” said. “As a journalist, it’s not an editorial position to be upset or angry at mass murder, of people going about their day, shopping, getting cut down by a stranger. It’s OK to be upset about that.”

Gayle King, the “CBS This Morning” anchor, described an experience of feeling “like you’re kicked in the gut once again.”

“My worry is that we are getting desensitized,” she added. “I don’t want us to get desensitized to it.”

And some reporters have to endure it, and report on it, repeatedly in their own communities.

Chris Vanderveen, 47, was there as a young reporter in the aftermath of the Columbine shooting. He was there to report on the 2012 Aurora movie theater shooting. And he had to lead a team of reporters during the Boulder shooting on Monday.

“When I was in journalism school I thought I’d be covering other things,” Mr. Vanderveen, the director of reporting at KUSA, Denver’s NBC affiliate, said in an interview.

He recalled painful lessons that he and his colleagues took from the Columbine shooting. Several reporters who covered that event developed close ties with people in the community, including parents of the victims. He said that helped them ask an important question: “What can we learn as journalists about not adding to the grief?”

After Aurora, KUSA invited family members of victims to the station. They were not there for an interview. “No story, no nothing,” he said. “Just to help us with our coverage.”

Mr. Vanderveen said that through those conversations, the station decided not to show the same mug shot of the gunman over and over again. And he said he continued to consider the role the news media played in potentially inspiring future killers. “I worry that there are people out there that for a variety of reasons may want recognition, and then they see this heavy emphasis on an individual who keeps getting his picture shown,” he said.

On Monday, Mr. Vanderveen was in a meeting about an investigative story when word came from a producer: There had been gunshots at a grocery store in Boulder. Grim experience quickly kicked in.

“Every journalist goes through tough stories,” he said. “We are not alone with it. It’s just unfortunate that we’ve had in Colorado, a number of these, that have given us, for lack of a better term, training in how to try to deal with these things. But it’s still going to be awful.”

His team of reporters may be among the few people in the news media covering the aftermath of the massacre, which he knows from experience will be a difficult assignment. After Columbine, national reporters stayed in the area for months. After Aurora, they stayed for a few weeks, he said. He suspects it will only be a matter of days before national news outlets leave Boulder.

“Maybe the country is tired of them,” he said. “I’m tired of them. If I never got to cover one of these damn things again, I’ll be fine.”