Home Food Building Pizzas That Can Survive the Box
Food

Building Pizzas That Can Survive the Box 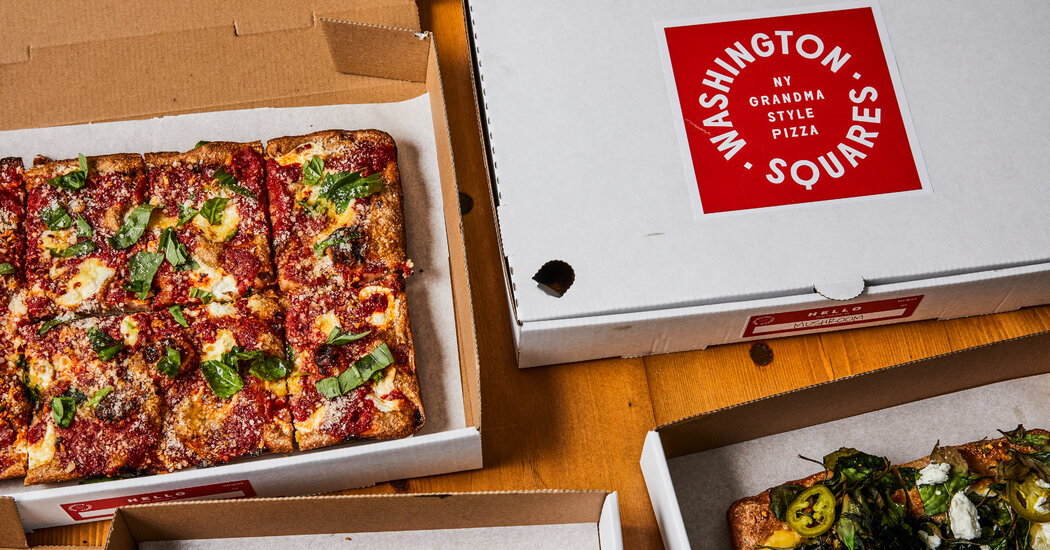 The cardboard pizza box has a status in American culture at least equal to that of the soup can. Andy Warhol did not silk-screen them, but a Philadelphia artist named Ed Marion painted a series of portraits on them, “right where the pie would sit,” as he explained. Other artists, including Ed Hardy, contributed designs to be printed on the outside. Pizza boxes have been used as movie props, usually in the hands of eager delivery boys, and as musical instruments. When the Velvet Underground parody band the Pizza Underground performed “Take a Bite of the Wild Slice” and other reworked songs, a percussionist, Deenah Vollmer, kept time by striking a drumstick against a pizza box.

One thing that a box never does, though, is make pizza better. The lightness and crunch that the dry heat of an oven gives the dough is undone by the steam heat of the cardboard shvitz. Moisture in the sauce or toppings seeps into the crust, where it can turn the center of the pie into red soup. As a general rule, the better the pizza, the greater the damage it suffers in confinement.

Over the past year, when far more pies than normal have been packed for takeout and delivery, some pizzerias have had to adapt. Two in particular — one older, one pandemic-new — craft memorable pizzas that can travel with almost no discernible wear and tear.

The first time I called the Brooklyn pizzeria Wheated to place an order, the man who picked up the phone asked me if I was going to eat my pizza in the car. I thought he was a bit nosy, until he explained that he would slice the pie if it was for immediate consumption but would leave it intact if not, making it easier to transfer to my oven.

The man turned out to be the owner, David Sheridan, and he seemed to have thought through just about every aspect of pizza transportation. Between Wheated’s pizzas and its takeout boxes, for instance, he places a type of paper mat I’ve never seen before, a stiff white disk covered with small dimples, like the surface of a golf ball. According to Mr. Sheridan, the texture allows steam to escape the crust, so it stays crisper.

After five minutes at 350 degrees, each of my four takeout pies was exceptional. The outer lip of crust was dark, substantial, chewy and crunchy, like a heel torn from a warm loaf of Italian bread. I might have buttered it if I hadn’t been distracted by the rest of the pizza.

On top of the pie that Wheated calls the NY Slice Style were tiny pebbles of coarsely grated Pecorino Romano. Bronzed patches of mozzarella shone out from under a thin layer of pulped tomatoes. This is a reversal of the usual cheese-on-top order, of course, and it seemed to protect the bottom crust, which stayed as dry as a cracker even after the long drive home.

It looked like no street-corner slice I’d ever seen. What it did resemble was a smaller, less charred pie from Totonno’s, the 97-year-old Coney Island pizzeria where slices of fresh mozzarella are arranged on raw dough before the sauce is applied, and where a hand-cranked grater reduces hard cheese to a fine gravel. Mr. Sheridan said this is no accident.

Before Covid, back when 90 percent of Wheated’s pizzas were eaten inside the restaurant, its NY Slice Style pizza followed the usual formula of shredded mozzarella over sauce. Mr. Sheridan spent the first three months of the pandemic rebuilding his pizzeria, investing in new equipment and changing his recipes to result in a more portable pizza. The engineering decisions were guided by his knowledge of dough, but the aesthetic ones were guided by his love of Totonno’s.

He began to make the dough stronger, richer in protein. He dropped his oven temperature and increased cooking times to allow moisture more time to evaporate. And, except on white pies, he began putting the sauce over the cheese, which melts and acts as a kind of raincoat for the crust.

Wheated makes 19 kinds of pizza. Some, like the margherita and the one topped with roasted eggplant, are known quantities. Others, like the Coney Island, with chorizo and fresh pineapple, may be new under the sun. The sturdy crust also allows Mr. Sheridan to indulge a fondness for kitchen-sink pizza that he has harbored since his childhood in Kentucky. One very good pie is topped with two kinds of meat, four kinds of cheese, mushrooms, roasted onions and mixed olives. It is called the Supreme.

The name Wheated is taken from a term applied to whiskey, which before the pandemic Mr. Sheridan bought by the barrel. He sold most of it to finance the shop’s transition to takeout pizza, except some six-year-old rye. You can order a $63 bottle of it when you place your pizza order, or drink it in a takeout-ready old fashioned sweetened with walnut liqueur.

In the pizzerias of Nassau County where the grandma style seems to have originated, the dough was stretched to fill an oiled sheet pan and then topped, like a Totonno’s pizza, in reverse order: The cheese went down first, then the tomatoes. This, and the pizza’s greater height, save the dough from getting soggy while trapped inside a cardboard box.

Grandma pizza, in other words, might have been expressly designed for the pandemic. And since December, the city has had a new takeout and pickup outfit specializing in the style. Called Washington Squares, it is a project of the chef Dan Kluger, who runs it out of his restaurant Loring Place in space that before the pandemic was devoted to cooking for private parties. With its own logo and website and delivery service, Washington Squares is essentially a ghost kitchen.

It’s also a spinoff from Loring Place, where a grandma pizza has been sucking up more than its share of attention since the restaurant opened in 2016. The restaurant also makes a thin-crust round pie, but for Washington Squares, Mr. Kluger chose the more portable grandma style.

The grandma pizza at Loring Place comes in one variety — tomatoes, mozzarella, fresh basil — and sits on a whole-grain red-wheat crust that is slightly different from the one Mr. Kluger uses at Washington Squares, he says. There’s a strong family resemblance, though, between the two models, both of which have a rounded, toastlike flavor and a fine structure that stands in opposition to the dry, starchy, gratuitously sweet whole-wheat pizza crusts that blighted college towns across the country in the 1970s and ’80s. Those pies sat in the stomach like a bag of folded laundry; the ones at Washington Squares are so well constructed that after eating an entire eight-slice box you feel lively enough to break into a Nicholas Brothers tap routine.

The crust, though, is solid enough to support a load of toppings that would undo a typical thin-crust pizza. Besides the standard tomatoes-over-cheese version, called the O.G., and an even more streamlined cheeseless tomato pie called the Plain Jane, Washington Squares exploits the structural stability of the crust with more elaborate arrays.

Spanakopita pizza sounds doomed. It is a charming surprise, with mint and other fresh herbs tucked in among spinach leaves that are softly wilted in one spot and pleasantly crisp in others.

Instead of the popular prosciutto and arugula — so tempting and so often disappointing — there is a ham and cheese pie with mozzarella under slices of country ham given a sweet-savory bloop of onion-quince jam. Young arugula leaves, bright and pungent, are packaged separately with a little container of vinaigrette. Combine it all and this pie out of a box outshines many you’d get in a sit-down pizzeria.

Should you want a salad, you’ll find the lettuce as crisp and inviting as the arugula garnish. For dessert, Mr. Kluger offers sundaes in a cardboard cup, or big cookies, including a tender, simple black-and-white. Beer is sold by the can. Wine is, too.