Home Food Bulgogi, Any Way You Slice It
Food

Bulgogi, Any Way You Slice It 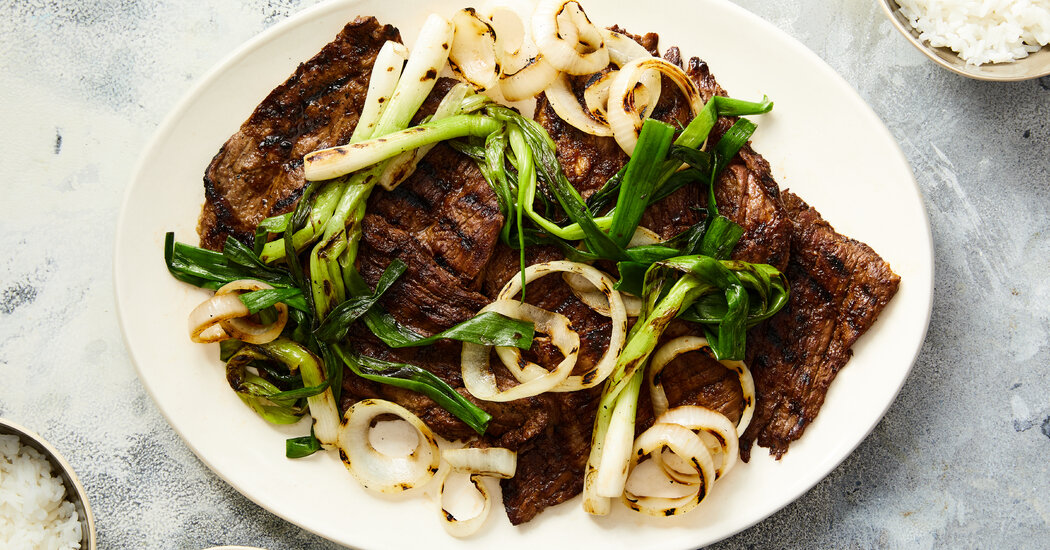 In a spiral-bound police community cookbook from the 1970s, Songza Park’s recipe for “BUL KOGI (Barbecued Beef)” calls for two pounds of sirloin steak that you have to slice “very thin on the bias” before scoring each piece with an X. In 1965, when Ms. Park immigrated to the United States from Korea, she had no access to Korean grocery stores, where today entire cases are dedicated to pre-sliced meat often labeled “bulgogi beef.”

“Back then, you couldn’t just buy bulgogi beef like you can now,” she said. “You got a chunk of meat and had the butcher slice it for you.” Or, if there wasn’t a butcher, you did it yourself.

For Ms. Park, a forensic chemist for the New Jersey State Police who has since retired, bulgogi was a weeknight workhorse, even without the convenience of pre-sliced meat. An adaptable staple of Korean cuisine, bulgogi is most often made from thin slices of marinated and grilled beef (though sometimes pork and less commonly chicken). If you grew up in a Korean household, then the dish wasn’t just occasional barbecue; it was dinner on the regular, a quick pan-fry on the stovetop.

During the Goguryeo kingdom (37 B.C. to A.D. 668), the Maek people in the northern Korean Peninsula ate maekjeok, a dish of grilled pork marinated in doenjang, a fermented soybean paste. Years later, maekjeok evolved into neobiani, a dish of broad, thin slices of beef tenderized and grilled over flames. A feature of royal court cuisine during the Joseon dynasty (1392 to 1910), neobiani is considered a predecessor to today’s beloved bulgogi.

At Cho Dang Gol, a restaurant that’s been on the 35th Street of Manhattan for over two decades, bulgogi finds its way into lacy zucchini jeon, a spicy octopus stir-fry and ttukbaegi bulgogi, a dreamy caldron of tender beef swimming in its own powerful juices where, once again, those familiar thin slices make an appearance.

These variations on the original grilled preparation, which the restaurant also serves, hint at the many ways in which bulgogi has, over the years, become culinarily both a noun (referring to a specific dish) and an adjective (summarizing a flavor profile). As an adjective, bulgogi describes the combined taste of soy sauce, garlic, ginger and sugar, among other ingredients, depending on how you cook it.

This expansive definition has made room for delicious innovations. Where bulgogi is a noun in bulgogi cheese steaks, it’s an adjective in bulgogi eggplant, which coats its main ingredient with a garlicky, soy-tinged sauce, sticky with sugar. Bulgogi means “fire meat” in Korean, but vegetarian alternatives allow the sweet and salty flavors of the heirloom dish to sing in any application, even meatless ones.

But is it bulgogi if there’s no meat? That depends on who you’re asking.

The food writer Justine Lee said: “It can be whatever it wants to be, as long as it imparts that familiar flavor. But certainly, I don’t think it has to be just those ingredients” (meaning that combination of soy sauce, garlic, ginger and sugar).

“My mom actively uses hot honey in her cooking now,” she added, “taking advantage of its heat, which you’d typically get from ginger.”

Bulgogi means something different to everyone, and that’s part of its lure. Ms. Lee found her Proustian bulgogi in a bowl of dolsot bibimbap, which she had as a tween in a shopping mall in Seoul. The crispy rice was topped with the deeply seasoned meat and mounded with molten mozzarella. “The cheese was almost an extension of the bulgogi,” she said.

The most popular menu item at the New York chef Hooni Kim’s restaurant, Danji, is a bulgogi slider that uses brisket. Though the presentation is modern, the bulgogi in question is still thinly sliced marinated meat. For Mr. Kim, the thin slices are key. “A thick cut of meat is not bulgogi,” he said. “It could be Korean barbecue, and many other things that feel Korean. But bulgogi to me is beef that you don’t have to chew much.”

Most seem to agree that thin, tender slices are a must, but the specific cut of beef is negotiable. Maangchi’s bulgogi recipe calls for “well-marbled boneless sirloin, tenderloin or skirt steak.” Seonkyoung Longest, the blogger behind the YouTube channel Asian at Home, uses “rib-eye, chuck or skirt steak” and even has a popular ground beef variation.

Hyosun Ro, the Washington, D.C.-based writer of the popular cooking blog, Korean Bapsang, said, “Don’t worry about which part of the cow to use.” Once, while preparing a care package to take to her children in New York, Ms. Ro turned a couple of frozen Costco flank steaks into bulgogi, thinly slicing the slabs and formulating a marinade to tenderize the tougher cut.

Other cuts require even less culinary deftness: Skirt steak, flank steak’s more marbled cousin, comes pretty thin already. Cut into segments and pounded with a meat mallet, it mimics the pre-sliced beef that stocks the many H Marts across New York, New Jersey and beyond.

These skirt steak segments — not unlike the neobiani that the royals ate — work well on a charcoal grill, too. Their broadness and heft mean that you can flip the slices over flames without losing them to the fire.

Simon Kim, the owner of Cote Korean steakhouse in New York, says he can’t serve bulgogi at his restaurant because the paper-thin slices would fall through the grates of the metal mesh grill pans lining his tables. Anyway, for him, bulgogi is home food.

Growing up, Mr. Kim preferred the more expensive kalbi, grilled short ribs, which he got to eat only on special occasions like his birthday. Now, as an adult, he finds himself longing for bulgogi, which, in the grand scheme of grilled Korean meats, isn’t a fancy dish by any means. But it’s still special in its own right — tried, true and beloved. “Bulgogi is not the Ferrari,” he said. “It’s your grandfather’s Cadillac.”