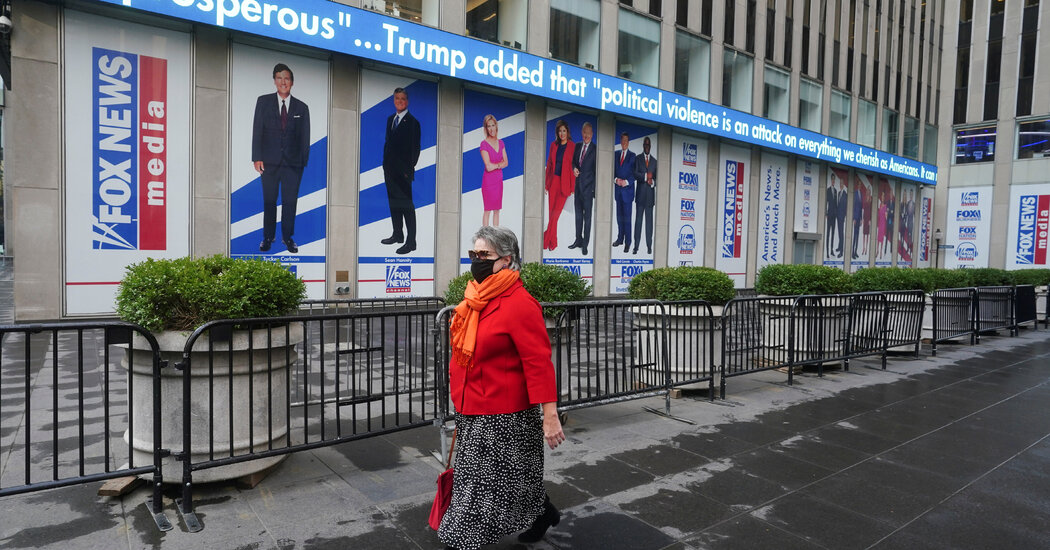 Fox News and its powerful owner, Rupert Murdoch, are facing a second major defamation suit over the network’s coverage of the 2020 presidential election, a new front in the growing legal battle over media disinformation and its consequences.

In the latest aftershock of Donald J. Trump’s attempt to undermine President Biden’s victory, Dominion Voting Systems, an election technology company that was at the center of a baseless pro-Trump conspiracy theory about rigged voting machines, filed a lawsuit on Friday accusing Fox News of advancing lies that devastated its reputation and business.

Dominion, which has requested a jury trial, is seeking at least $1.6 billion in damages. Less than two months ago, Smartmatic, another election tech company, filed a $2.7 billion lawsuit against Mr. Murdoch’s Fox Corporation and named the Fox anchors Maria Bartiromo, Lou Dobbs and Jeanine Pirro as defendants.

In a 139-page complaint filed in Delaware Superior Court, Dominion portrayed Fox as an active player in spreading false claims that the company had altered vote counts and manipulated its machines to benefit Mr. Biden in the election.

Those falsehoods were relentlessly pushed by Mr. Trump’s lawyers, Rudolph Giuliani and Sidney Powell, in public forums, including appearances on Fox programs.

In January, Dominion sued Mr. Giuliani and Ms. Powell, accusing them of defamation. The company also sued Mike Lindell, the chief executive of MyPillow and a Trump ally who was a frequent guest on Fox and other conservative media outlets. Each of those suits seeks damages of more than $1 billion.

“The truth matters,” Dominion’s lawyers wrote in Friday’s complaint against Fox. “Lies have consequences. Fox sold a false story of election fraud in order to serve its own commercial purposes, severely injuring Dominion in the process. If this case does not rise to the level of defamation by a broadcaster, then nothing does.”

In a statement on Friday, Fox said its 2020 election coverage “stands in the highest tradition of American journalism” and pledged to “vigorously defend against this baseless lawsuit in court.”

Dominion’s filing opened what its lawyers called a new phase in its battle against its detractors, and Thomas A. Clare, a lawyer representing the company, said the Fox lawsuit was unlikely to be its last legal action. The law firm Susman Godfrey, which is known for taking cases to trial, recently teamed up with Mr. Clare’s firm to aid with Dominion’s defense.

Fox Corporation has filed a motion to dismiss the Smartmatic lawsuit, arguing that the false claims of electoral fraud made on its channels were part of covering a fast-breaking story of significant public interest.

“An attempt by a sitting president to challenge the result of an election is objectively newsworthy,” Fox wrote in the motion.

The narrative that Mr. Trump and his allies spun about Dominion was among the more baroque creations of a monthslong effort to cast doubt on the 2020 election results and convince Americans that Mr. Biden’s victory was not legitimate.

Dominion, founded in 2002, is one of the largest manufacturers of voting machine equipment in the United States. More than two dozen states, including several carried by Mr. Trump, used its equipment last year.

Allies of Mr. Trump falsely portrayed Dominion as biased toward Mr. Biden and argued, without evidence, that it was tied to Hugo Chávez, the long-dead Venezuelan president. John Poulos, Dominion’s founder, and other employees received harassing and threatening messages from people convinced that the company had undermined the election results, according to the complaint.

Fox News and Fox Business programs were among the mass-media venues where Mr. Trump’s supporters denounced Dominion. The lawsuit also cites examples when Fox hosts, including Ms. Bartiromo and Mr. Dobbs, uncritically repeated or vouched for false claims made by Mr. Giuliani and Ms. Powell.

“Fox took a small flame and turned it into a forest fire,” Dominion wrote in the lawsuit, adding that the network “gave these fictions a prominence they otherwise would never have achieved.”

Dominion’s lawyers on Friday also cited an unusual argument made by Ms. Powell in a motion, filed on Monday, to dismiss the separate Dominion suit against her.

In that motion, her lawyers asserted that, because political language is often inexact, “no reasonable person” would accept Ms. Powell’s claims as facts. The motion essentially argues that her claims about Dominion’s voting machines were hyperbolic and therefore not defamatory.

Mr. Clare described Ms. Powell’s contention as “ridiculous,” but he said her acknowledgment that her claims were not factual could prove relevant to Dominion’s suit. “Fox knew these were lies, but they made a deliberate decision to spread them to their enormous audience,” Mr. Clare said on a call with journalists.

Dominion says it recently lost major contracts with election officials in Georgia and Louisiana, adding that the company is now facing “the hatred, contempt and distrust of tens of millions of American voters.”

Defamation litigation is a relatively novel tactic in the battle against disinformation, but it has generated some early results.

Taken together, Dominion and Smartmatic are demanding at least $4.3 billion in damages from Fox. Controlled by Mr. Murdoch, 90, and his elder son, Lachlan, the Fox Corporation reported that it had made $3 billion in pretax profit from September 2019 to September 2020, on revenue of $12.3 billion.

As a major media organization, Fox News enjoys robust protections under First Amendment case law, which often shields newspapers and broadcasters from being held liable for claims made by interview subjects. If a court determines that Dominion is a public figure, its lawyers would have to show that Fox acted with “actual malice” and “reckless disregard” for the truth, typically a high standard to meet.

“There’s a concern that imposing liability here on Fox could lead to the suppression of information that people have a strong interest in knowing about,” said Timothy Zick, a William and Mary Law School professor who specializes in First Amendment law.

In its lawsuit on Friday, Dominion argued that Fox had incentive to spread falsehoods about a rigged election, in part to placate pro-Trump viewers who were angered by the network’s early projection that Mr. Biden would carry Arizona.

Dominion also makes the case that Fox and its hosts benefited from uncritically repeating these baseless claims. The suit cites a postelection rise in ratings for anchors like Ms. Bartiromo and Mr. Dobbs, and notes that the ex-husband of Ms. Pirro, who spoke on the air of a stolen election, later secured a pardon from Mr. Trump.

Fox has argued that its reporting on the election should be viewed in its totality, pointing out that at least one host, Tucker Carlson, voiced skepticism about Ms. Powell’s statements. The network has also said claims by the president’s lawyers in an election dispute were inherently newsworthy.

Free-speech experts said Fox had been compelled to make a broader defense of its journalism, rather than of the particular claims it broadcast about Dominion and Smartmatic.

“Fox has had a problem because a lot of its pundits have said the very things that have led Dominion to bring this lawsuit,” the prominent First Amendment lawyer Floyd Abrams said in an interview.

Facebook
Twitter
Pinterest
WhatsApp
Previous articleBiden Condemns Georgia’s New Voting Law: ‘Jim Crow in the 21st Century’
Next articleWhy Did Someone Pay $560,000 for a Picture of My Column?

Intel has selected Ohio for a new chip manufacturing complex that would cost at least $20 billion, ramping up an effort to increase...
Read more