Home Tech Enter the Age of the Vaccine Selfie
Tech 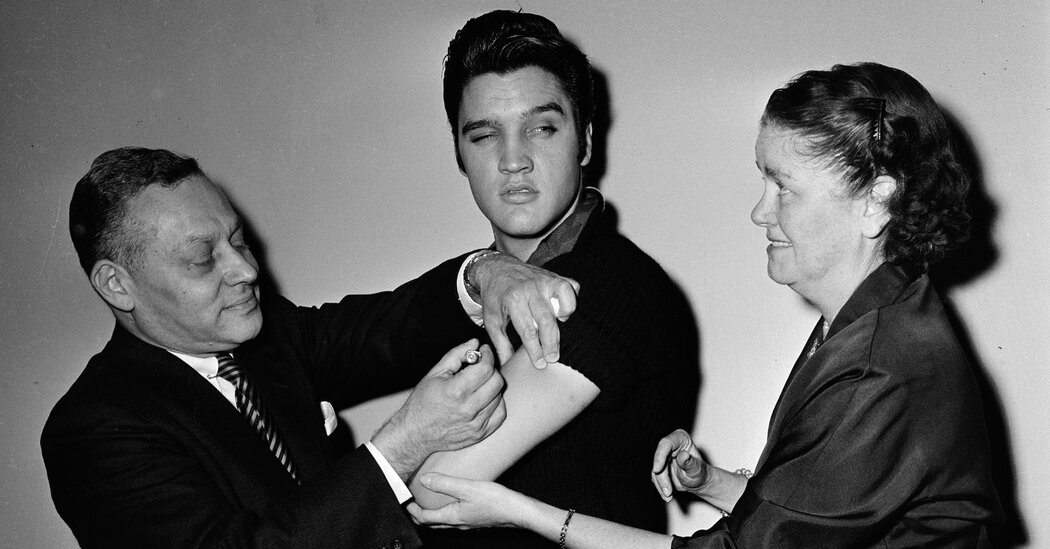 Someday, when the history of the pandemic is written, it may be a narrative told partly in images: the despair of crowded hospitals and body bags, the fear and isolation of the masks. And then the balm of a smiling individual, one sleeve rolled up practically to the collarbone, with a medical worker poised to jab a needle into their upper arm. Log in to any social platform, and the picture — not to mention The Pose — is almost impossible to miss.

The vaccine selfie has gone viral.

“I started seeing vaccine selfies almost as soon as the vaccines were available,” said David Broniatowski, an associate professor of engineering and applied science at George Washington University. “It was an almost immediate meme.” And rather than petering out, it seems only to be picking up steam.

Indeed, said Jeanine D. Guidry, an assistant professor at Virginia Commonwealth University focusing on public health and health communications, “It may end up being one of the iconic images of this time.”

Perhaps unsurprisingly, it has sparked its own bizarre sub-trend: the topless (or partially topless) vaccine selfie, as most often modeled by European politicians, but also the occasional celebrity.

There have been partially disrobed selfies shared by the French health minister Olivier Véran (white dress shirt unbuttoned and left side exposed) and the Greek prime minister, Kyriakos Mitsotakis (blue button-up pulled rakishly to one elbow, hairy chest on display). See the partially disrobed selfies from a variety of British members of Parliament, including Brendan Clarke-Smith (checked shirt pulled askew practically to the belly button, with one button above the belt done up for modesty) and Johnny Mercer (entirely shirtless).

Also, the designer Marc Jacobs, who posed in pink sparkling shorts with his pink shirt entirely off half of his torso, leopard coat, and some pearls.

“It’s a look, and a moment, worth celebrating,” Vogue chortled.

Perhaps that does explain the dressing choice: Many of us have been hiding inside for so long, feeling scared and powerless, that there’s something liberating about taking clothes off. Though the answer may also be simply that we’ve forgotten how to dress for public-ish injections. Or the need to do something to get attention in an age of social media chaos. If everyone’s taking selfies, how do you signal that your selfie is an important selfie?

After all, as Ms. Guidry pointed out, it is both a new phenomenon — and a very, very old one.

Yup, it goes that far back, in part because, for as long as there have been inoculations, there has been unease around the whole idea. (Taking a healthy person and injecting them with a bit of illness to make them better is a hard sell.) And that means there have been conscious efforts by public health authorities to promote them. Which have, most often, involved The Pose.

“Images are just very powerful,” said Mark Dredze, an associate professor of computer science at Johns Hopkins University who has studied the way vaccine pictures are shared on Twitter. “People relate to them much more than text.”

There are, for example, multiple late-18th-century engravings of Edward Jenner, a vaccine pioneer and creator of the smallpox vaccine, inoculating his own children and patients. One of the most famous of the vaccine photo ops is a 1956 shot of Elvis Presley, then only 21 and a full-fledged teen idol, looking dreamy with his sweater pulled up to get his polio jab. The year before that, a lineup of French models was caught poised to receive their smallpox vaccine, grinning and flashing a bit of shoulder.

By 1976, President Gerald Ford, fearful of warnings about a giant wave of swine flu, happily posed in a vest and tie with shirt sleeves rolled up while receiving his flu shot. And, in 2009, President Barack Obama was snapped in the White House with a nurse preparing to administer the H1N1 vaccine. In all cases the theory behind the images was the same.

“In public health communications, it’s generally considered good practice to have pictures of trusted leaders” getting their shots,” Mr. Broniatowski said. The thinking goes: You see an elected official being a wiling guinea pig, the picture works its way into your subconscious, and suddenly you start to think: “Oh, I should do that, too.” Follow-the-leader in visual code.

And so it went — until the current pandemic.

That’s because between President Obama and today, two things happened. First, social media really took off. (It’s hard to remember, but the iPhone was introduced in 2007, which was the same year Facebook and Twitter went global. Instagram didn’t appear until 2010.) Second, as Ms. Guidry said, in something of an understatement, “We’ve seen a breakdown in trust in some areas of science and a breakdown in trust in our political leaders.”

That meant that though it was important to see snaps of President-elect Biden and Vice President-elect Harris getting their Covid shots on camera, not to mention Dr. Fauci and Vice President Pence (and though it was significant that President Trump was not captured for posterity receiving his shot), “it’s almost more important to see friends and family getting vaccinated,” Ms. Guidry said.

It’s advertising 101, Mr. Dredze said, to make sure “people seeing an ad can relate to what they are seeing in the ad.” In public health terms, that translates to people like us — people of all different ages and colors and genders — getting vaccinated. And because we are all now media producers as well as media consumers, it is possible.

At a time when social networks have become one of our primary means of communication, the images are important, not just to get the news out, but to normalize the experience and expand it — to effectively pay it forward.

In the drive toward herd immunity, the vaccine selfie plays a key role. No longer simply an expression of vanity or lifestyle humble brag, it has effectively turned the crowd, witting or not, into health-care proselytizers.

While it is possible that all of these pictures of The Pose may cause some resentment (not everyone who wants to get vaccinated can yet get vaccinated), and the topless politicians may have gotten the most attention for their shots (in both meanings of that word), the selfie stream itself represents a tipping point. One that everyone can see.

LinkedIn has been the lone major American social network allowed to operate in China. To do so, the Microsoft-owned service for professionals censors...
Read more
Tech

Jake Paul Promised Them Fame. Was It Worth the Price?

In the vast world of YouTube villains, there may be none as famous as Jake Paul.The 24-year-old Vine star turned vlogger has polarized...
Read more