Facebook’s Next Target: The Religious Experience 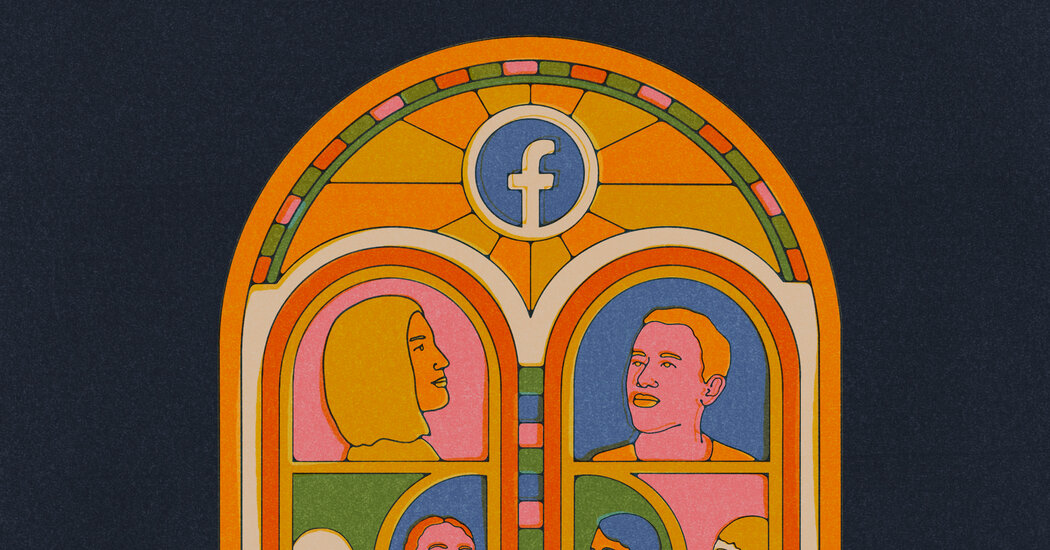 Months before the megachurch Hillsong opened its new outpost in Atlanta, its pastor sought advice on how to build a church in a pandemic.

The social media giant had a proposition, Sam Collier, the pastor, recalled in an interview: to use the church as a case study to explore how churches can “go further farther on Facebook.”

For months Facebook developers met weekly with Hillsong and explored what the church would look like on Facebook and what apps they might create for financial giving, video capability or livestreaming. When it came time for Hillsong’s grand opening in June, the church issued a news release saying it was “partnering with Facebook” and began streaming its services exclusively on the platform.

Beyond that, Mr. Collier could not share many specifics — he had signed a nondisclosure agreement.

“They are teaching us, we are teaching them,” he said. “Together we are discovering what the future of the church could be on Facebook.”

Facebook, which recently passed $1 trillion in market capitalization, may seem like an unusual partner for a church whose primary goal is to share the message of Jesus. But the company has been cultivating partnerships with a wide range of faith communities over the past few years, from individual congregations to large denominations, like the Assemblies of God and the Church of God in Christ.

Now, after the coronavirus pandemic pushed religious groups to explore new ways to operate, Facebook sees even greater strategic opportunity to draw highly engaged users onto its platform. The company aims to become the virtual home for religious community, and wants churches, mosques, synagogues and others to embed their religious life into its platform, from hosting worship services and socializing more casually to soliciting money. It is developing new products, including audio and prayer sharing, aimed at faith groups.

Virtual religious life is not replacing in-person community anytime soon, and even supporters acknowledge the limits of an exclusively online experience. But many religious groups see new opportunity to spiritually influence even more people on Facebook, the world’s largest and arguably most influential social media company.

The partnerships reveal how Big Tech and religion are converging far beyond simply moving services to the internet. Facebook is shaping the future of religious experience itself, as it has done for political and social life.

The company’s effort to court faith groups comes as it is trying to repair its image among Americans who have lost confidence in the platform, especially on issues of privacy. Facebook has faced scrutiny for its role in the country’s growing disinformation crisis and breakdown of societal trust, especially around politics, and regulators have grown concerned about its outsize power. Over the past week, President Biden has criticized the company for its role in the spread of false information about Covid-19 vaccines.

“I just want people to know that Facebook is a place where, when they do feel discouraged or depressed or isolated, that they could go to Facebook and they could immediately connect with a group of people that care about them,” Nona Jones, the company’s director for global faith partnerships and a nondenominational minister, said in an interview.

“Faith organizations and social media are a natural fit because fundamentally both are about connection,” Ms. Sandberg said.

“Our hope is that one day people will host religious services in virtual reality spaces as well, or use augmented reality as an educational tool to teach their children the story of their faith,” she said.

Facebook’s summit, which resembled a religious service, included testimonials from faith leaders about how Facebook helped them grow during the pandemic.

The collaborations raise not only practical questions, but also philosophical and moral ones. Religion has long been a fundamental way humans have formed community, and now social media companies are stepping into that role. Facebook has nearly three billion active monthly users, making it larger than Christianity worldwide, which has about 2.3 billion adherents, or Islam, which has 1.8 billion.

There are privacy worries too, as people share some of their most intimate life details with their spiritual communities. The potential for Facebook to gather valuable user information creates “enormous” concerns, said Sarah Lane Ritchie, a lecturer in theology and science at the University of Edinburgh. The goals of businesses and worshiping communities are different, she said, and many congregations, often with older members, may not understand how they could be targeted with advertising or other messages based on their religious engagement.

“Corporations are not worried about moral codes,” she said. “I don’t think we know yet all the ways in which this marriage between Big Tech and the church will play out.”

A Facebook spokeswoman said the data it collected from religious communities would be handled the same way as that of other users, and that nondisclosure agreements were standard process for all partners involved in product development.

Many of Facebook’s partnerships involve asking religious organizations to test or brainstorm new products, and those groups seem undeterred by Facebook’s larger controversies. This year Facebook tested a prayer feature, where members of some Facebook groups can post prayer requests and others can respond. The creator of YouVersion, the popular Bible app, worked with the company to test it.

Facebook’s outreach was the first time a major technology company wanted to collaborate on a development project, said Bobby Gruenewald, YouVersion’s creator and a pastor at Life.Church in Oklahoma, recalling how he also worked with Facebook on a Bible-verse-a-day feature in 2018.

“Obviously there are different ways they ultimately, I am sure, will serve their shareholders,” he said. “From our vantage point, Facebook is a platform that allows us to build community, and connect with our community and accomplish our mission. So it serves I think everybody well.”

The Presbyterian Church (U.S.A.) was invited to be a Facebook faith partner in December, said Melody Smith, a spokeswoman for the denomination’s missions agency. The denomination agreed in a contract that it would have no ownership of any products it helps Facebook design, she said.

They decided to try two Facebook tools: subscriptions where users pay, for example, $9.99 per month and receive exclusive content, like messages from the bishop; and another tool for worshipers watching services online to send donations in real time. Leaders decided against a third feature: advertisements during video streams.

The pandemic accelerated existing dynamics, packing years of technology development into one, said Bob Pritchett, who founded Faithlife, a Christian ministry platform with a suite of online services.

But spiritual life is different from the personal and professional spaces occupied by Facebook and LinkedIn, he said.

It is dangerous to have your community anchored “on a tech platform that is susceptible to all the whims of politics and culture and congressional hearings,” he said.

Facebook created its faith partnerships team in 2017 and began courting religious leaders, especially of evangelical and Pentecostal groups, in earnest in 2018.

Minister groups for the Assemblies of God, the Pentecostal denomination with 69 million members worldwide, were early adopters of a Facebook tool allowing users to call in to a livestream. The Potter’s House, T.D. Jakes’s megachurch of 30,000 in Dallas, also tested various features before they were rolled out.

For some pastors, Facebook’s work raises questions about the broader future of church in a virtual world. So much of religious life remains physical, such as sacraments or the laying on of hands for healing prayer.

Online church was never meant to replace the local church, said Wilfredo De Jesús, a pastor and the general treasurer for the Assemblies of God. He was grateful for Facebook, but ultimately, he said, “we want everyone to put their face in another book.”

“The technology has created in the lives of our people this quickness, this idea that I can call and just show up at Target and park my car and they open my truck,” he said. “The church is not Target.”

For churches like Hillsong Atlanta, the ultimate goal is evangelism.

“We have never been more postured for the Great Commission than now,” Mr. Collier said, referring to Jesus’ call to “make disciples of all nations.”

He is partnering with Facebook, he said, “to directly impact and help churches navigate and reach the consumer better.”

“Consumer isn’t the right word,” he said, correcting himself. “Reach the parishioner better.”