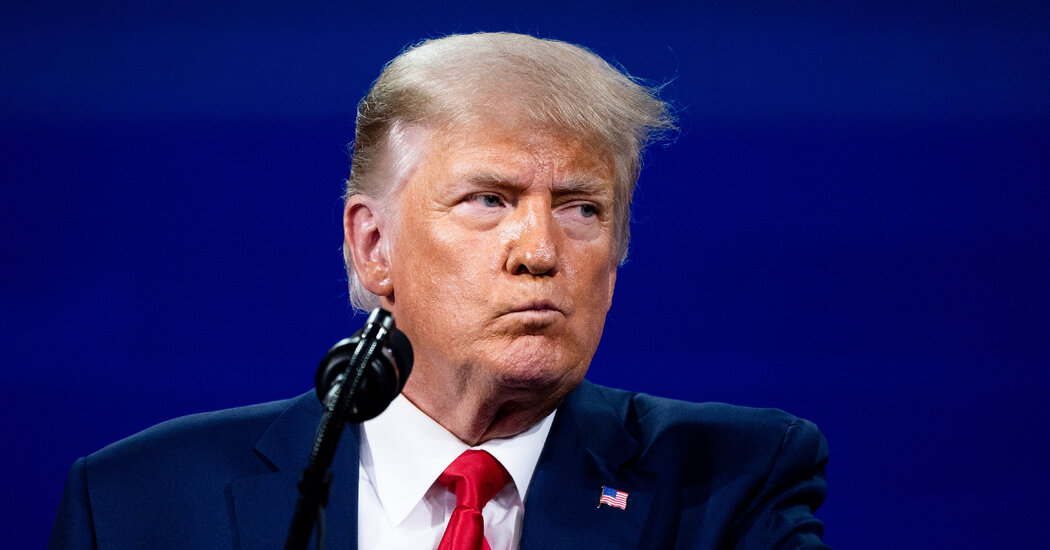 SAN FRANCISCO — Facebook said on Friday that Donald J. Trump’s suspension from the service would last at least two years, keeping the former president off mainstream social media for the 2022 midterm elections, as the company also said it would end a policy of treating posts from politicians differently from those of other users.

The social network said Mr. Trump would be eligible for reinstatement in January 2023, before the next presidential election. It will then look to experts to decide “whether the risk to public safety has receded,” Facebook said. The company barred Mr. Trump from the service after he made comments on social media that rallied his supporters, who stormed the U.S. Capitol on Jan. 6, but it had not given a firm timeline about when or if the suspension would end.

“Given the gravity of the circumstances that led to Mr. Trump’s suspension, we believe his actions constituted a severe violation of our rules which merit the highest penalty available under the new enforcement protocols,” Nick Clegg, the vice president of global affairs at Facebook, wrote in a company blog post.

If reinstated, Mr. Trump would be subject to a set of “rapidly escalating sanctions” if he committed further violations, up to and including the permanent suspension of his account, Facebook said.

Facebook also said it was ending a policy of keeping posts by politicians up by default even if their speech broke its rules.

For years, Facebook and other social media companies had said they would not interfere with political speech because it was in the public interest. During Mr. Trump’s presidency, the companies did not rein in his inflammatory language as he attacked enemies and spread misinformation. They changed their stance after Mr. Trump’s use of social media on the day of the Capitol attack.

Facebook’s rethinking of how to treat political speech has implications not only for American politics but also for world leaders such as President Jair Bolsonaro of Brazil and Prime Minister Narendra Modi of India, who have been active on the platform.

Yet Facebook’s moves, which create a more specific framework for how it handles political figures, are unlikely to satisfy its detractors and may reinforce what some see as the company’s disproportionate power over online speech.

“There are many people who believe it was not appropriate for a private company like Facebook to suspend an outgoing president from its platform, and many others who believe Mr. Trump should have immediately been banned for life.” Mr. Clegg said. “We know today’s decision will be criticized by many people on opposing sides of the political divide — but our job is to make a decision in as proportionate, fair and transparent a way as possible.”

He said the moves were a response to criticism that the company had not provided sufficient insight into its decision-making, and he said Facebook was putting into place a system of protocols and sanctions to be applied in exceptional cases such as Mr. Trump’s.

For Mr. Trump, who has been permanently barred on Twitter, Facebook’s action means he will be muted from the mainstream platforms during at least the 2022 midterm election cycle. Mr. Trump, who before the bans used social media as a megaphone to reach his tens of millions of followers, has found it more difficult to communicate with those supporters — and loom even larger over the Republican primary field. He started a blog called “From the Desk of Donald J. Trump” about a month ago but shut it down this week after it gained little traction.

In an emailed statement, Mr. Trump said Facebook’s ruling was “an insult to the record-setting 75M people, plus many others, who voted for us in the 2020 Rigged Presidential Election.” He added that Facebook should not be allowed to get away with “censoring and silencing” him and others on the platform.

Mr. Trump later added a message to Mark Zuckerberg, Facebook’s chief executive. “Next time I’m in the White House there will be no more dinners, at his request, with Mark Zuckerberg and his wife,” he said. “It will be all business!”

Facebook said Mr. Trump’s two-year suspension was a severe penalty and that it was in response to criticism that the company had not set a specific timeline for his ban, and was not tied to the midterm elections. The company also said it could elongate Mr. Trump’s suspension beyond and that it would monitor external factors like instances of violence to determine if it needed to do so.

Facebook’s broader shift to no longer automatically exempt speech by politicians from its rules is a stark reversal from a free-speech position that Mr. Zuckerberg had championed. In a 2019 address at Georgetown University, Mr. Zuckerberg said, “People having the power to express themselves at scale is a new kind of force in the world — a Fifth Estate alongside the other power structures of society.”

But that stance drew criticism from lawmakers, activists and Facebook’s own employees, who said the company allowed misinformation and other harmful speech from politicians to flow unhindered.

While many academics and activists welcomed Facebook’s changes as a step in the right direction, they said carrying out the new rules would be tricky. The company would probably enter into a complicated dance with global leaders who had grown accustomed to receiving special treatment by the platform, they said.

“This change will result in speech by world leaders being subject to more scrutiny,” said David Kaye, a law professor and former United Nations monitor for freedom of expression. “It will be painful for leaders who aren’t used to the scrutiny, and it will also lead to tensions.”

Countries including India, Turkey and Egypt have threatened to take action against Facebook if it acts against the interests of the ruling parties, Mr. Kaye said. The countries have said they might punish Facebook’s local staff or ban access to the service, he said.

“This decision by Facebook imposes new political calculations for both these global leaders, and for Facebook,” Mr. Kaye said.

Pressure has also come from Russia, where the country’s internet regulator has ramped up its demands for Facebook, Twitter and Google to remove online content that it deems illegal and to restore pro-Kremlin material that had been blocked. In India, officers from the country’s elite antiterrorism police last month visited Twitter’s New Delhi offices in a show of force, a sign that Mr. Modi’s government has grown increasingly frustrated with American internet companies.

At Facebook, the decision to change policies on political speech began in earnest after conservatives and others challenged the decision to bar Mr. Trump in January, saying it smacked of censorship. To combat the criticism, Facebook referred Mr. Trump’s case to its Oversight Board, a company-appointed panel of academics, journalists and former members of government. The board reviews content cases and decides whether Facebook has acted properly on them.

Last month, the board ruled that Facebook was right to ban Mr. Trump from Facebook, but it said the company had not sufficiently explained its decision and that an indefinite suspension of the former president was “not appropriate.” It kicked the decision on whether to permanently ban Mr. Trump back to Facebook.

Executives then spent the past few weeks discussing and reconsidering the company’s policies, said two people with knowledge of the deliberations, including revisiting why Facebook had created a special exemption for politicians. After executives were unable to fully explain the exemption to themselves, they decided the rule should not be automatic, the people said.

But the company has still given itself a way to keep up controversial political speech in what it considers rare or special circumstances. If Facebook deems that a statement from a politician has broken its rules but is “newsworthy” enough and in the public interest, it can still decide to leave the post up. The company plans to disclose such instances when they occur, it said.

Jillian C. York, an internet censorship expert with the Electronic Frontier Foundation in Berlin, said that still left a lot of wiggle room for Facebook. “The new policy is still unclear and leaves open a lot of room for interpretation,” she said.

Facebook also said it would provide outside experts with data about how people used its platform through the end of February so that researchers could study the network’s role in the Jan. 6 riot. That expanded an effort the company announced last year, when it said it would share data covering last year’s presidential election.

Facebook has long said it does not want to be an arbiter of speech. Mr. Zuckerberg has called for lawmakers to create regulations for his company to follow regarding content decisions.

“American democracy doesn’t belong to Silicon Valley. It belongs to the American people,” Mr. Clegg said in a podcast interview. “And it’s the legislators and politicians of this country who in the end have to govern the rules that prevail.”

A Novel Way to Finance School May Penalize Students from HBCU’s, Study Finds

The typical student who borrows to attend college leaves with more than $30,000 in debt. Many struggle to keep up with their payments,...
Read more
Business

Under the new formula, sole proprietors can get loans based instead on their income before expenses. That opens the program to unprofitable businesses...
Read more
Business

Why Coinbase’s Trading Debut Is a Cryptocurrency Coming-Out Party

SAN FRANCISCO — Digital currency, once mocked as a tool for criminals and reckless speculators, is sliding into the mainstream.Traditional banks are helping...
Read more