Home Business Fed Could Raise Rates 3 Times in 2022 and Speeds End of...
Business 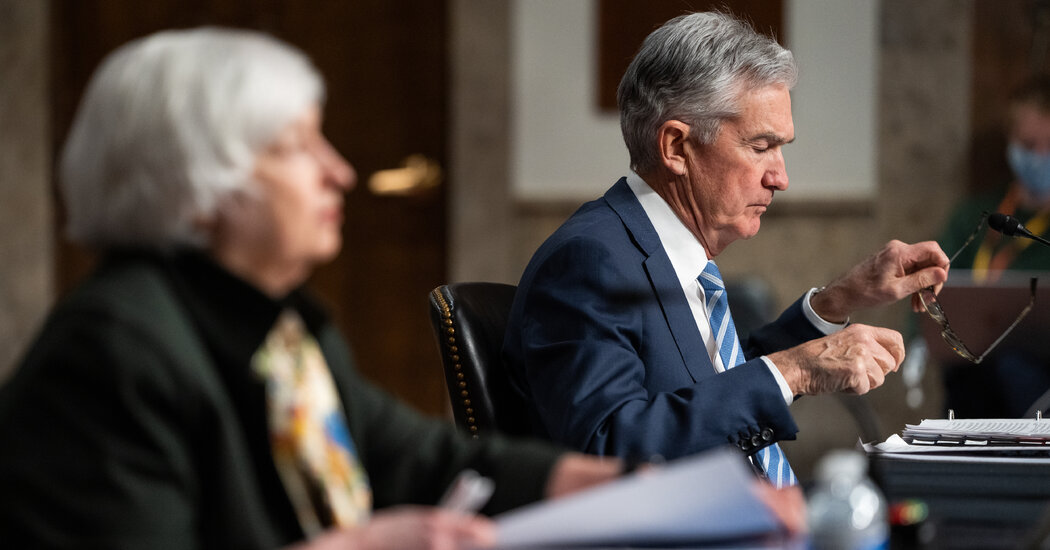 Federal Reserve policymakers moved into inflation-fighting mode on Wednesday, saying they would cut back more quickly on their pandemic-era stimulus at a moment of rising prices and strong economic growth, capping a challenging year with a policy shift that could usher in higher interest rates in 2022.

The central bank’s policy statement set up a more rapid end to the monthly bond-buying program that the Fed has been using throughout the pandemic to keep money chugging through markets and to bolster growth. A fresh set of economic projections released on Wednesday showed that officials expect to raise interest rates, which are now set near-zero, three times next year.

“Economic developments and changes in the outlook warrant this evolution,” Jerome H. Powell, the Fed chair, said of the decision to pull back on bond purchases more quickly.

By tapering off its bond buying faster, the Fed is doing less to stimulate the economy with each passing month, and putting the program on track to end completely in March.

That would place Fed policymakers in a position to raise interest rates — their more traditional and more powerful tool — sooner. The Fed has made clear it wants to end its bond-buying program before it raises rates, which would cool off demand by making it more expensive to borrow for a home, a car or expanding a business. That would in turn weigh on growth and, eventually, price gains. The Fed’s new economic projections suggested rates, which have been at rock-bottom since March 2020, might rise to 2.1 percent by the end of 2024.

The Fed’s final meeting of the year completed its decisive shift away from providing full-blast support to the economy and toward guarding against the risk of rapid and lasting inflation. While officials spent much of the year laying out a patient path for weaning the economy off the Fed’s pandemic support, they have become more worried that a burst in prices this year could linger, resulting in a more proactive stance.

What to Know About Inflation in the U.S.

Central bank officials, who are supposed to maintain price stability and foster full employment, have also been encouraged by strengthening in the job market.

“In my view we are making rapid progress toward maximum employment,” Mr. Powell said in his remarks. Fed officials estimated in their new economic projections that the unemployment rate would return to its prepandemic level of 3.5 percent by the end of 2022 — sooner than they had previously forecast.

Still, inflation has been higher and broader and has lasted longer than policymakers had anticipated. Consumer prices climbed 6.8 percent in November from a year earlier, the quickest pace of increase since 1982. The Fed’s preferred inflation gauge has shown slightly slower gains but has also moved up sharply.

Some economists have warned that the new Omicron variant of the coronavirus could allow elevated inflation to linger if it further disrupts supply chains and causes factories to shut down for periods of time. Mr. Powell on Wednesday acknowledged that the spreading virus was a risk that contributed to economic uncertainty.

“The rise in Covid cases in recent weeks, along with the emergence of the Omicron variant, pose risks to the outlook,” he said.

The Fed chair said that a quicker conclusion to bond buying — which officials first announced they would slow following their November meeting — would put policymakers in a position to react to a range of possible economic outcomes next year. And asked if there would be a big gap between when bond buying ended and when rate increases began, as there was during the last economic rebound, Mr. Powell said the situation was different this time.

“The economy is so much stronger now,” Mr. Powell said, later adding that “there wouldn’t be the need for that kind of long delay.”

Mr. Powell’s public shift to sounding more concerned about inflation came shortly after President Biden announced on Nov. 22 that he would appoint him to a second term as chair, saying he believed Mr. Powell would focus on both the need to control inflation and fostering a strong economy that creates jobs and pushes wages higher.

That timing fueled speculation about whether Mr. Powell turned toward fighting inflation and putting less primacy on keeping borrowing cheap once he had secured reappointment — or that his reappointment gave him a new mandate to act more boldly, knowing he would be around to carry out the plan.

But Mr. Powell batted back that idea on Wednesday, providing a detailed look at his own evolution in thinking about inflation and the data that convinced him the Fed needed to speed up its plans.

“It had nothing to do with it at all,” he said of the reappointment, noting that other Fed officials were already setting up the change in policy before Mr. Biden’s decision was announced. “My colleagues were out there talking about a faster taper, and that doesn’t happen by accident.”

Mr. Powell, his colleagues and many economists had initially expected rapid price gains to fade fairly quickly as the economy got through a bumpy reopening period after lockdowns meant to contain the pandemic.

But Mr. Powell said his shift began after Labor Day, as the job market showed signs of strengthening and inflation readings remained elevated. Just before the Fed’s last meeting on Nov. 2-3, wages moved up sharply in the Employment Cost Index, which tracks how much employers are spending on their workers.

“We got the E.C.I. reading on the eve of the November meeting and it was very high,” Mr. Powell said, adding that index was so elevated he briefly considered announcing a faster end to the bond buying than what policymakers ultimately announced.

“I thought for a second there whether we should increase our taper,” he said. Then additional data poured in, showing signs of rapid inflation that was broadening into categories that were not simply roiled by the pandemic: Rents were rising, for instance. Labor market progress also proved “much faster,” prompting the change in tone and approach.

Many policymakers still hold out hope that inflation will fade back toward the Fed’s 2 percent annual average goal as global shipping routes clear through backlogs, factory production increases to meet demand, and consumers shift toward more normal spending patterns after scrambling to buy lawn equipment and stationary bikes during the pandemic.

The strong labor market seems to have made the Fed’s change in tone and approach easier. Because the job market is healing so swiftly, officials can be less concerned about slowing it down as they move to control prices.

The jobless rate has fallen to 4.2 percent, down sharply from the double-digits heights it reached early in the pandemic. Still, many people remain out of the labor market — some because they have retired, but others because of virus fears or a lack of child care. That is making judging how close the economy is to the Fed’s goal of “maximum employment” a more complicated task.

That said, “with each appearance, the chair appears less hopeful that labor force participation will bounce back soon,” Michael Feroli, chief U.S. economist at J.P. Morgan, wrote in a research note after the announcement. “Instead, the emphasis has turned to the traditional unemployment rate.”

Mr. Powell on Wednesday suggested that the return to a higher participation rate might take time, because the pandemic had disrupted people’s working lives in meaningful ways. And he hinted that lower labor force participation wouldn’t keep the Fed from raising interest rates.

He said that coaxing people back into the labor market would require a long expansion.

“To make that happen, we need to make sure we maintain price stability,” Mr. Powell said.

The Academy Awards were created in 1929 to promote Hollywood’s achievements to the outside world. At its pinnacle, the telecast drew 55 million...
Read more
Business

Can CNN’s Hiring Spree Get People to Pay for Streaming News?

A couple of months ago, CNN’s forthcoming streaming channel was perceived as little more than a curiosity in the television news business: just...
Read more