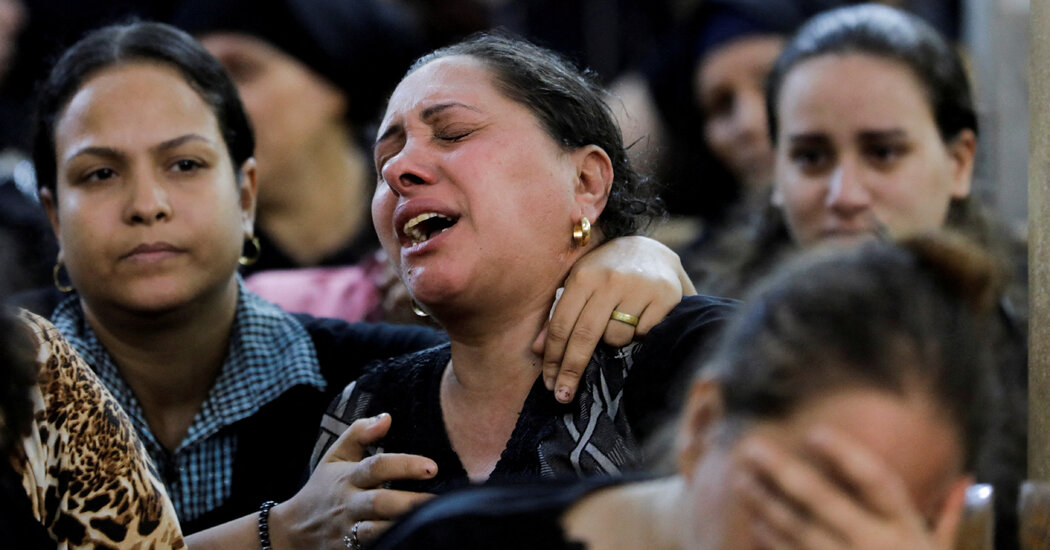 GIZA, Egypt — The worshipers had gathered on a hot, bright Sunday morning for Mass in a small room at a Coptic Orthodox church in greater Cairo when they heard a boom. The power had been out earlier, and the generator and electrical outlets were running at the same time — a fatal miscalculation.

As the power came back on, witnesses said, the generator exploded, followed by an air-conditioning unit. It set off a blaze that tore through the four-story building housing Abu Sefein Church in Giza. The fire led to a stampede of churchgoers, the government said.

Some fled to the windows. Rescuers hauled some up to the roof. Footage shared on social media and verified by The New York Times showed worshipers screaming for help as smoke poured from the building. Others were seen on the roof as flames spread around them.

By day’s end, at least 41 bodies had been counted, including those of children and the church’s bishop, Abdul Masih Bakhit. At least a dozen other people had been injured. The majority of the deaths and injuries were the result of smoke inhalation and the stampede, Egypt’s Health Ministry said.

The blaze added to the trauma of the beleaguered Coptic Christian minority and raised questions in a country whose government has long been criticized over its lax safety standards and poor oversight. Those factors loomed large on Sunday even as Egypt’s Interior Ministry said in a statement that a preliminary inquiry showed only that the blaze might have been caused by the failure of an air-conditioning unit on the second floor of the building, which also housed classrooms and a nursery. Witnesses said a switch that prevents the generator and the regular electricity from running simultaneously should have been turned off but was not.

The country’s chief prosecutor, Hamada el-Sawy, said he had ordered an investigation into the fire.

Some residents of Imbaba, the densely packed neighborhood that is home to the church, criticized the response time of the government and emergency services. One woman said in footage shared by Al Jazeera that crews did not arrive for two and a half hours.

But others said that responders had arrived within 15 minutes and had quickly put out the flames. And the new health minister, Khaled Abdel Ghaffar, defended officials’ emergency response, saying teams had arrived within minutes. The Interior Ministry said the blaze had been brought under control.

Youssef Ibrahim, 19, who lives next to the church, said he had been on his way to work when the explosion rippled across the neighborhood. In shock, he ran to the building.

“A man was sticking half his body out the window, gasping for air,” he said. “We held blankets so that when he fell, we’d catch him. He was an old man. All of a sudden, he fell into the blanket, but it fell to the ground. He was heavy. He died instantly.”

Mr. Ibrahim said he had entered the building and helped carry out the bodies of some of the victims, including those of children.

“I went to the second floor, searching for water to put out the fire,” he said. “I broke the door of a room, and behind it there was a bunch of children, all unconscious. I had no idea what to do; I was in disbelief. That’s when a friend of mine came, and we took the children’s bodies downstairs together, one by one.”

He said he went back up to the top floor to check if anyone else was there.

“On the top floor, there was a chair that was all burned,” he recalled, his voice largely lost from shouting and inhaling smoke. “I moved the chair, and I found someone. It was the bishop.”

Father Mikhael Guirguis, the deputy leader of the Northern Giza Archdiocese, told a church-affiliated TV station that he had also seen the bodies of several children after the blaze.

Seif Ibrahim, 66, the father of Youssef Ibrahim, said rescuers had jumped from other rooftops onto the top of the church building, but the door to the roof was locked.

“Some climbed up to the roof to grab people from the windows,” he said. “People from buildings around the church were throwing water into the windows out of buckets.”

“My heart broke watching them take out the children’s bodies,” he added.

It was unclear exactly how many people were in the church at the time of the fire. A spokesperson for the church could not be reached for comment.

Egypt has been plagued in recent years by fires that spiral into mass casualty events.

In 2002, at least 370 people were killed when a fire broke out on an overnight train speeding through the expanse of upper Egypt as flames spread from car to car. In 2005, at least 31 people died in a blaze at a state-owned theater in the city of Beni Suef after a candle fell during a production of “Hamlet.”

In 2008, a fire gutted the Upper House of Egypt’s Parliament, injuring at least 10 people. A blaze at a garment factory near Cairo killed at least 20 people in March 2021. And two separate hospital fires — in 2020 and 2021 — killed a total of nine coronavirus patients in the cities of Alexandria and Giza.

For decades, Christians in Egypt have complained that government restrictions on the construction, renovation and repair of churches have been part of a larger pattern of discrimination that has relegated them to second-class citizenship and left many of their houses of worship in disrepair. Legislation dating to 1934 prohibits churches from being built near schools and government buildings, and permits have traditionally been issued by presidential decree.

The government has viewed church projects as a potential security issue that must be tightly managed, in part because of the country’s history of sectarian clashes, according to a 2018 report by the Project for Middle East Democracy, a U.S.-based research institute.

As a result, thousands of churches, fearful of drawing attention to themselves, have built places of worship without official authorization, often ignoring fire-safety standards. The building that burned on Sunday was converted into a church without a permit, Seif Ibrahim said. It wasn’t until a few years later, he said, that the church was licensed.

President Abdel Fattah el-Sisi introduced a law in 2016 that aimed to overhaul the regulations. Though the law was hailed at the time, dysfunction and bureaucracy have blunted its effect.

Coptic Christians make up about 10 percent of Egypt’s 100 million population, which is mostly Sunni Muslim. The minority group had been the target of violent attacks, including by the Islamic State’s branch in Egypt’s Sinai Province.

After the blaze on Sunday, Mr. el-Sisi offered his condolences to the head of Egypt’s Coptic Orthodox Church, Pope Tawadros II, according to a statement from the president’s office.

“I directed all concerned state agencies and institutions to take all necessary measures,” Mr. el-Sisi said on Twitter.

On Sunday, relatives of victims held a funeral Mass in the Warraq neighborhood.

The alleyway where the church burned was cordoned off. The second floor where the blaze was believed to have started was black from floor to ceiling. Workers removed damaged furniture.

Toward sunset, trucks loaded with construction material drove into the alleyway. The president was reported to have ordered immediate renovations at the church.

An iron cross, the only sign that the building had housed a church, stood on the roof above the soot-smeared walls.