From Savoie, White Wines That Refresh Like Mountain Air 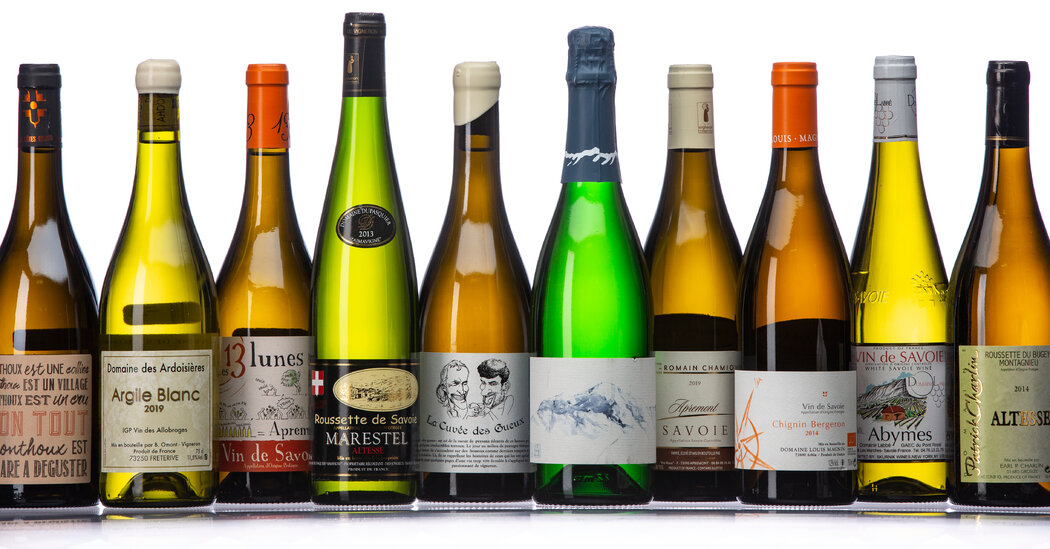 Places like Savoie exist all over historic wine areas, little-known cul-de-sacs that are suddenly embraced by the outside world, though the residents have been making wine there for centuries.

Then again, there’s only one Savoie.

This small, hilly protrusion in the Alpine foothills of eastern France juts into the mountainous region where Switzerland meets Italy. It produces some excellent red wines, but mostly whites that are as cool, crystalline and refreshing as a mountain stream.

I’ve consumed quite a few Savoie whites over the last few weeks, and the best of them, without fail, made me feel as if I were in breezy meadows among the foothills, under the distant glowering crags of the Alps themselves.

This transportive quality is a powerful feature of Savoie whites. The leading grapes, altesse and jacquère, are little known outside the region. Other important white grapes include mondeuse blanche, roussanne and chardonnay, along with a host of other indigenous grapes.

But no matter which grapes were used or how they were blended, the wines seem to have characteristics in common that outweigh their differences. Those that I liked best all spoke assertively of the place they were grown, displaying a bracing freshness that is a welcome tonic in the summer heat.

Shopping in New York retail shops, I came across 10 Savoie whites that I would highly recommend. In areas less well-served by great wine shops, bottles of Savoie will be harder to come by. No doubt the selection I put together will be tough to duplicate anywhere.

But finding only these 10 wines is not the point of this exercise. Instead, I hope you will seek out whichever Savoie whites you encounter. Maybe they will include producers mentioned here, but perhaps you’ll discover your own treasures.

I’m tempted to describe Savoie as a singular region, but that’s a dangerous claim. On the other side of the borders in Switzerland and Italy, similar Alpine wines are made, though perhaps with different grapes and cultural spins. They, too, await wider awareness.

Within the Savoie itself, numerous subregions like Apremont, Chignin and Seyssel put their own spins on the wines. Other nearby regions like Bugey and Isère are not technically part of the Savoie but have enough in common that they can be grouped together.

Though the Savoie region, like many other historical wine-producing areas, has grown grapes for wine since ancient Roman times, until recently it was little known beyond its borders. Only in the last 20 years or so has the rest of the world begun to discover it.

Savoie, like most European wine regions, was devastated in the late 19th century by phylloxera, a ravenous aphid that preys on the roots of vitis vinifera, the species to which virtually all European grapevines belong. A solution was finally discovered, grafting vinifera vines onto American rootstocks, which are immune to phylloxera.

This was an arduous process, particularly on steep, hillside vineyards, and many were abandoned. After phylloxera, winemaking continued to decline with World War I, the Great Depression and World War II in quick succession.

“Until as late as the 1970s there were hardly any vine-growers who lived solely from their vines,” said Wink Lorch in her authoritative book “Wines of the French Alps.” “Either they had another job or they were mixed farmers.”

One important turning point, Ms. Lorch suggests, was the development of the postwar ski industry, which created new customers for Savoie wines. This encouraged a new wave of independent vignerons and several 21st century organizations dedicated to preserving the singular grape varieties of the region.

Each of the following 10 wines is typically brisk and refreshing. Only one of them rose as high as 13.5 percent alcohol. Most were 11 percent to 12 percent. I’ve listed them from least to most expensive. If some seem a bit pricey, it’s important to remember that farming on steep slopes is labor-intensive hand work. Many of these producers work organically or biodynamically as well.

Some producers that I adore I was not able to include as I didn’t see their wines. But if you see bottles from Nicolas Gonin, Domaine Giachino or Lambert de Seyssel, snap them up.

A few of these wines are six or seven years old. It’s not often that you can buy white wines already aged. Some producers hold back their wines a few years before releasing them, doing the work of aging themselves. Each tasted young and fresh.

Though I have focused on Savoie whites, don’t hesitate to try out the reds, which are likewise delicious and distinctive.

Straightforward and uncomplicated — these words don’t hold a lot of weight with many readers. Yet the world needs plenty of wines like this, intended simply for pleasure and refreshment when your mind is on other matters. This bottle epitomizes what the Apremont region is known for: light, fresh, floral wines made from the jacquère grape. Apremont wines can do a lot more than this bottle, but sometimes a wine like this is exactly what you want. (Rosenthal Wine Merchant, New York)

Roger Labbé farms roughly 25 acres not far from the village of Chambéry. This wine is made entirely of the jacquère grape, and drinking it feels almost like standing in an Alpine meadow. It is lively and floral, with lemon tones, and it’s absolutely refreshing. The texture is oily and feels rich, yet the wine is just 11 percent alcohol, making it a great bottle to open at lunch. (Skurnik Wines, New York)

Here’s another Apremont, yet it’s quite a bit different than the Chamiot. It’s richer, with a lip-smacking purity, depth and energy, along with fresh floral, herbal and citrus flavors. It’s got another dimension, but maybe it requires a little more attention, too. The Liotards farm their vines biodynamically, which perhaps accounts for the vibrancy of the wine. (Wine Traditions, Falls Church, Va.)

Like the Liotards, Adrien Berlioz farms his roughly 12 acres biodynamically, often on perilously steep slopes near Chignon, a village between Chambéry and Albertville. This cuvée is a blend of jacquère and altesse. It’s rich, yet light and fresh, with incisive acidity, aromas and flavors of flowers and herbs, and an underlying stony quality. (Wilson Daniels Wholesale, New York)

It’s not often you see seven-plus-year-old white wines in retail shops. This may be a tough bottle to find, but it’s an excellent example of how well these Savoie whites can age. Its aroma is not at all extravagant, yet it still smells like a bouquet of flowers or a cornucopia of fruits. It’s pure, balanced and stony, with years to go. Serve with Alpine cheeses or fresh seafood. (Selection Massale, San Leandro, Calif.)

Patrick Charlin produces small amounts of wine in the Montagnieu area of the Bugey region. Bugey is not technically within the Savoie, but it’s very nearby and uses similar grapes, like the altesse in this bottle. Though it may be six-plus years old, it’s just beginning to blossom. It’s rich — richer than the Dupasquier — yet scintillating acidity makes it feels light and refreshing, with intriguing earthy melon and nutlike flavors. (Becky Wasserman & Company/Grand Cru Selections, New York)

Domaine des Ardoisières, practically in the shadow of Mont Blanc, comprises roughly 17 acres on steep, terraced vineyards, farmed organically. As the name suggests, Argile Blanc is grown on white clay and schist. It’s a combination of jacquère, mondeuse blanche and a grape called chardonnay, which you might know about. Altogether, this wine is like a laser beam, bright, pure and penetrating, like stepping into a cold mountain stream. (Martine’s Wines, Novato, Calif.)

Nicolas Ferrand, the proprietor of Domaine des Côtes Rousses, calls himself a paysan vigneron, a peasant farmer and winemaker. One might imagine an old man, with years of experience etched into a weathered face and under the fingernails. But 2014 was Mr. Ferrand’s first vintage. For a relatively young producer, this wine, made entirely of altesse, tastes of the ages, fragrant with the aromas of flowers and herbs. It’s bone dry, lovely and refreshing. (Grand Cru Selections)

Another white with a few years of age, and again, this wine, tastes as if it has many years ahead of it. This one is made of roussanne, a Rhône grape that is known in the Savoie as bergeron. The wine is rich, ripe and round, with herbal, floral and citrus aromas, not unlike other Savoie whites. The difference is felt in the body, texture and opacity of this wine, which is so intriguing you keep sipping in an effort to reach the heart of it, even if you never quite get there. (Rosenthal Wine Merchant)

In mid-June, Dominique Belluard, the proprietor of this superb domaine, died by suicide. He and his wines were beloved by many around the world. Mr. Belluard was determined to introduce people to the beauty of the wines from his part of the Savoie, centered on the village of Ayze. Almost single-handedly, he resurrected gringet (pronounced grahn-ZHAY), a nearly extinct local white grape, and demonstrated its potential when in the right hands. This is his sparkling gringet, made using the Champagne method. It’s graceful and gentle, lightly herbal, stony and sweetly grassy. It’s a gorgeous expression and a sad reminder of a great loss. (Selection Massale)