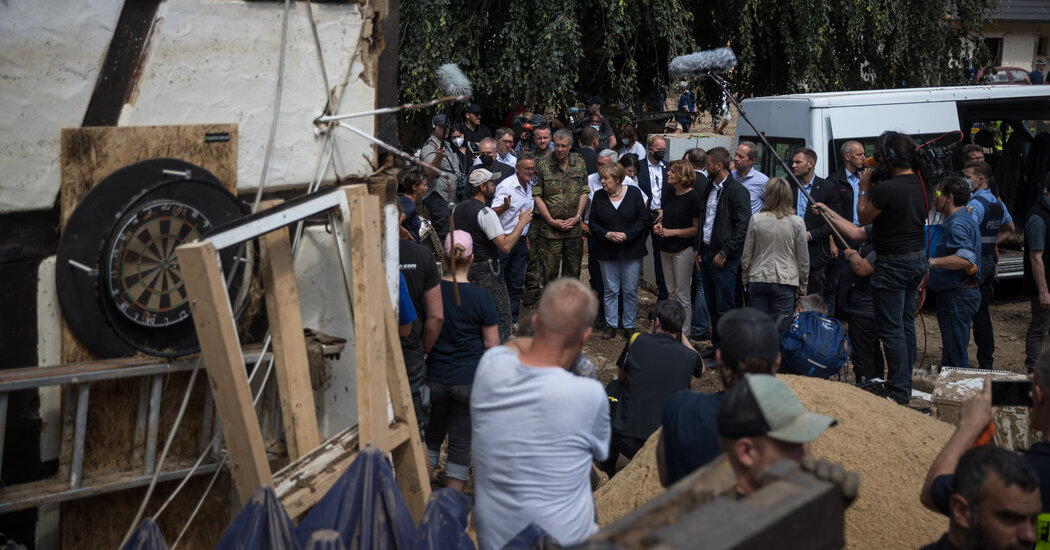 BERLIN — Chancellor Angela Merkel on Sunday met with survivors and thanked volunteers as she made her way through a village wrecked by the extraordinary floods that have killed at least 183 people in Germany and Belgium, calling the level of destruction “surreal and eerie.”

As rescue teams continued searching for victims amid the wreckage and debris, heavy rains in the southern German region of Bavaria caused still more flooding on Sunday. The authorities said they expected the number victims to rise, as many hundreds of people remained unaccounted for, though it was unclear how many were simply unreachable by friends or family amid the chaos of the calamity and lost communications.

Helicopters buzzed overhead as Ms. Merkel arrived in Schuld, a formerly quaint village of half-timbered homes and cobbled streets on the banks of the Ahr River, rendered an unrecognizable tangle of debris covered in sticky brown mud by gushing waters last week. German meteorologists called the flooding the worst in 500 years, if not a millennium.

“The German language has no words, I think, for the devastation,” Ms. Merkel told reporters after touring the village. She pledged that her government would organize aid, immediately and in the midterm, as well as help to rebuild infrastructure.

“Germany is a strong land and has the means to respond to this,” the chancellor said, promising to return at the end of August to see firsthand what might be needed after the initial debris has been cleared. “We stand on your side. The federal and state governments will work together, hand-in-hand to restore the world in this lovely region.”

After a brief tour, the chancellor sat down to speak with local firefighters and soldiers who have spearheaded efforts to clear the debris, restore communications and provide clean drinking water. Ms. Merkel asked how the workers were faring — shouting several questions so as to be heard above the buzzing of helicopters passing overhead.

“Thank you,” she said, as she rose to leave, adding, “Is there anything else you want me to know, since I’m here?”

“We just really hope that you will support us,” replied one of the men, who had explained how the damage to the home of one team member had rendered it unlivable, while another had lost his entirely.

The appearance was Ms. Merkel’s first since the start of the disaster, and everyone she encountered appeared pleased that she was there. The chancellor, who is known for her deliberate, cautious approach to handling problems, was in Washington when the worst of the flooding struck on Thursday. She held video conferences with the leaders of the worst-affected regions after she returned on Friday. Saturday was her 67th birthday.

Despite her relative absence, Ms. Merkel has been shielded from public criticism by the sudden timing of the floods, the significance of her trip to Washington — considered an important step to restoring ties with the United States after the tumultuous Trump administration — her formidable political stature well into her fourth term as chancellor, and now her status as a lame duck.

Instead, most of the German news media have focused on how the candidates to replace her in September’s election have responded to the tragedy. All three of the main candidates in the race visited the stricken areas last week.

Still, after 16 years of guiding Europe’s largest and most powerful country through one calamity after the other — including the global economic downturn in 2008, the European debt crisis that followed, the arrival of more than one million migrants six years ago and, most recently, the coronavirus pandemic — Germans have become accustomed to her approach of analyzing and contemplating a situation before deciding to act.

Ms. Merkel’s finance minister, Olaf Scholz, said the government was working to organize several hundred million euros, or dollars, of immediate relief for those who lost their homes and their livelihoods in the floods.

On Saturday, President Frank-Walter Steinmeier of Germany visited the city of Erftstadt, where the raging waters washed away several homes and triggered a landslide; at least 16 residents there remain unaccounted for. He was accompanied by Armin Laschet, 60, the head of the conservative Christian Democratic Union and the leading contender for the chancellery, who is the governor of North Rhine-Westphalia state.

The political perils the tragedy holds were revealed during that tour. While Mr. Steinmeier was giving a solemn statement to the news media, urging solidarity with the victims of the devastation, Mr. Laschet was caught on camera standing behind him, laughing and chatting with people nearby.

Mr. Laschet’s rivals were quick to criticize him, but the chancellor refused to comment on the episode, stressing her cooperation with him as the leader of a flood-stricken state.

The secretary general of the Social Democrats, Lars Klingbeil, called Mr. Laschet’s behavior “lacking in decency and appalling” in a comment to the Bild am Sonntag newspaper. “They say that people’s character shows in times of crisis,” he added.

The Social Democrats’ candidate for the chancellery is Mr. Scholz, 63, the finance minister, who has been polling in third place, behind the Greens, whose candidate Annalena Baerbock, 40, visited Rhineland-Palatinate last week, and Mr. Laschet’s conservative party.

It was unclear if the gaffe would damage Mr. Laschet’s lead, but the governor sought to explain himself on Saturday in a message on Twitter.

“The fate of those affected, which we heard about in many conversations, is important to us,” he wrote, and he thanked Mr. Steinmeier for his visit. “So I regret all the more the impression that arose from a conversational situation. That was inappropriate and I am sorry.”

Even as the country struggled to come to terms with the extent of the damage to the states of Rhineland-Palatinate, where Schuld is, heavy rains caused more flooding in Germany’s east and south, killing at least one person, in addition to the 112 people pronounced dead in Rhineland-Palatinate.

In North-Rhine Westphalia, where the interior minister said 45 people had died, more storms ripped through the south of the country.

Flooding in Belgium killed at least 27 people, local news media reported the authorities as saying. Dozens remained missing there, and rescue workers spent much of the day going door to door looking for anyone who had not been able to escape the rising waters in time.

That the authorities still lacked clarity on Sunday over how many people were missing four days after the floods struck reflected the severity of the damage caused to local infrastructure in Rhineland-Palatinate, said Malu Dreyer, the state’s governor.

“The water was still flowing up until a couple of days ago, we have mud and debris,” Ms. Dreyer said. “Now we have the police, soldiers and firefighters who are systematically combing through the whole region searching for the missing.”

Ms. Merkel said that in addition to the financial support from the government, the German Army and other emergency assistance organizations would remain in the area as long as needed.

“Everything we have is being put to use,” she said, “and still it is unbelievably painful for those who have lost loved ones, for those who still don’t know what has happened and for those facing the destruction of their livelihoods.”