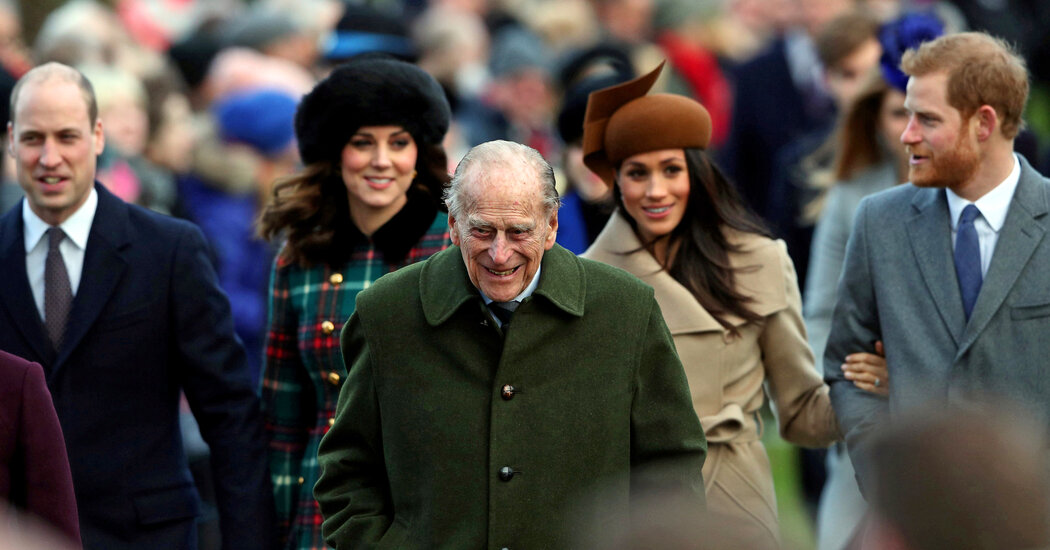 LONDON — Buckingham Palace said on Saturday that Prince Harry would be returning to Britain for Prince Philip’s funeral next weekend, setting in motion fevered speculation about whether the reunion would mend fences in the royal family or sow deeper discord.

The visit, Harry’s first since stepping down as a senior royal last year, will force a meeting with his brother, Prince William, and father, Prince Charles, who Harry said in an explosive interview last month were trapped in an unhappy palace life. But Harry will travel without his wife, Meghan, Duchess of Sussex, who palace officials said would remain at the couple’s California home on doctor’s orders because she is in the latter stages of pregnancy.

For weeks, while the world awaited Oprah Winfrey’s interview last month with Harry and Meghan, the eyes of many Britons were fixed on the health of Philip, Harry’s grandfather, who had been hospitalized with a heart condition.

Newspapers pictured Prince Charles in February leaving the bedside of Philip, his father — the son’s eyes bloodshot as he was driven away. Harry and Meghan were castigated for comments about leaving their royal roles that detractors saw as ill-mannered in light of Philip’s illness. “Have They No Respect?” the Daily Mail screamed.

That period of national concern over Philip’s health lent the royal family sympathy during an unusual dust-up within the institution, one that pitted brother against brother as Harry, in the interview with Ms. Winfrey, accused his family of racism and emotional abandonment.

With that conflict still raging, Philip’s death on Friday at age 99 opened a new and uncertain chapter in the turbulent life of the House of Windsor. Among the first acts of the post-Philip era was the announcement that Harry would attend his grandfather’s funeral, scheduled for April 17, a slimmed-down ceremony that palace officials said would be limited to 30 people.

Prime Minister Boris Johnson of Britain will not be among them: Wishing to avoid taking a family member’s seat, Mr. Johnson will not attend, his office said on Saturday.

No question was more on the minds of royal watchers than whether Harry would make peace with his brother, Prince William, after a monthslong feud.

“Harry will come home, and a meeting between the brothers and perhaps, with luck, a reconciliation over their dead grandfather could be a possibility,” said Penny Junor, a royal historian.

“It’s going to go one way or the other,” Ms. Junor said. “There’s a sort of war going on within the family, and being played out in public. It’s been everything the family doesn’t want.”

The heating up of those tensions during Philip’s hospitalization created an awkward split screen, which defenders of Buckingham Palace used to attack Harry and Meghan for doing anything that could detract attention from the patriarch’s health.

In her interview, Meghan referred to Philip’s illness after Ms. Winfrey had asked about regrets. She said she had awaked that very morning to a note saying that Philip had been hospitalized.

Nevertheless, she and Harry offered a painful account of their life within “the Firm,” the family institution that Philip spent much of his life trying to preserve.

They said members of the family had expressed concern about how dark the skin of the couple’s then-unborn child, Archie, would be. Meghan said her efforts to seek mental health treatment had been rebuffed by palace officials, who worried about potential damage to the monarchy.

The comments reverberated through Britain, touching off frank conversations about racism and the country’s colonial legacy. Philip’s own history of bigoted remarks was often cited as an example of anachronistic attitudes that were said to prevail within the family.

So concerned was Harry about how the interview would affect Philip and Queen Elizabeth II that he got in touch with Ms. Winfrey shortly after it aired.

“He wanted to make sure I knew, and if I had an opportunity to share it, that it was not his grandmother or grandfather that were part of those conversations,” she told CBS News, referring to the comments about Archie’s skin color.

The interview hardly featured in the wall-to-wall coverage of Philip’s death on British news stations on Friday. And for some in the country, it was a time for leaving the royal turmoil of recent months behind them.

“Obviously, there was so much scandal around the Meghan and Harry thing,” said Lottie Smith, 18, who heard about Philip’s death on a train ride into London on Friday and came to Buckingham Palace to pay her respects. “I think his passing will sort of leave that alone now.”

Her friend Catherine Vellacott, 19, chimed in with the hope that it would “maybe unite the nation more.”

That was how Prime Minister Boris Johnson saw it, too. He cast Philip’s death on Friday as a reminder of the glue that has kept Britain stuck to its monarchy for so long.

“Like the expert carriage driver that he was,” Mr. Johnson said of Philip outside Downing Street, “he helped to steer the royal family and the monarchy so that it remains an institution indisputably vital to the balance and happiness of our national life.”

Even so, the biggest test of whether Philip’s death can reunify his warring family seems likely to come at his funeral.

Befitting Philip’s preference for avoiding undue fuss, as well as Covid-19 restrictions on large gatherings, he will not lie in state, a ceremony at which the public would have been allowed to view his coffin. The 30-person limit at his funeral, at St. George’s Chapel at Windsor Castle, was in keeping with government restrictions, forcing the paring back of a guest list that would normally have run to several hundred people.

Palace officials said on Saturday that his coffin would be carried through the castle grounds in a Land Rover. Plans for the televised ceremony, approved by Philip several years ago, had been scaled down because of the pandemic, they said.

The procession will be joined by members of the royal family, along with military personnel.

On Saturday, gun salutes marking Philip’s death were fired from cities across the four nations of the United Kingdom and at sea, a tradition dating back centuries. In London, among the weapons fired were 13-pounder field guns from World War I, the same fired at the wedding of Philip and Queen Elizabeth II in 1947.

Prince Charles also offered a video tribute to his father.

“My dear papa was a very special person who I think, above all else, would have been amazed by the reaction and the touching things that have been said about him,″ he said in the tribute, filmed from his home in Highgrove in southwestern England.

During Philip’s service in the British Navy during World War II, he was credited with hatching a plan in 1943 that saved his crew members’ lives as they came under fire from German bombers.

As for Harry, he told James Corden, the talk show host, in late February of video chats with his grandfather and Archie during lockdown when Philip, instead of pressing the red button at the end of the call, would slam down the lid of the laptop.

Travelers to England face mandatory self-isolation periods, although people can shorten them with private coronavirus testing. Harry’s representatives said that he would follow the protocols.

Few elements of the fallout between Harry and the rest of his family have pained Britons as much as his strained relationship with William, with whom he was once said to have a very close bond.

“If there is a coming together at the funeral, and the boys, the brothers, can speak to one another and forgive and forget, then I think there’s some hope that Philip’s death may bring about an end to something that might otherwise have gone on for decades,” said Ms. Junor, the historian, who wrote “The Firm: The Troubled Life of the House of Windsor.”

“But that hasn’t happened yet, and it may not happen,” she said. “I certainly hope it does.”

Royal commentators suspect that even as Philip stepped back from his busy public schedule in recent years, he continued to play an active role in big issues facing the family, Harry and Meghan’s departure among them.

If the queen is Britain’s head of state, commentators say, Philip was head of the royal household. He was credited with giving television cameras an early peek at the family’s private life in the 1960s and introducing efficiencies at Buckingham Palace.

Yet his stewardship of the royal household was not without difficulties. Known for cracking the whip, he wounded Charles, his oldest son, with frequent belittlements. And though Philip took it upon himself to steer the family through marital troubles, he was partly blamed for the palace’s seemingly grudging response to an outpouring of grief over the death of Charles’s wife, Diana, Princess of Wales, in a car crash in Paris in 1997.

Facebook
Twitter
Pinterest
WhatsApp
Previous articleInside the Fight for the Future of The Wall Street Journal
Next articleLife Has Moved On, but Fans in Atlanta Mourn the All-Star Game