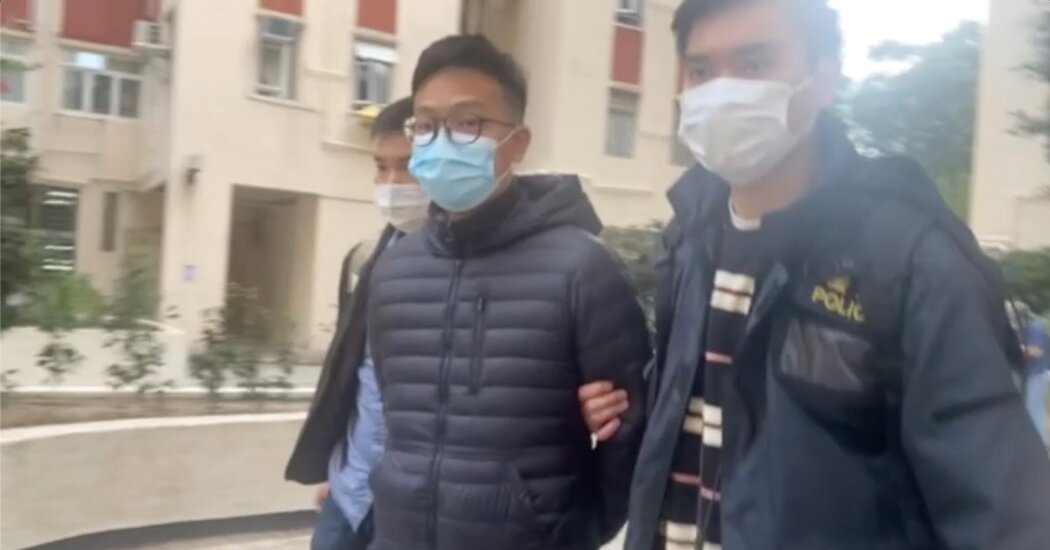 HONG KONG — Hundreds of Hong Kong police officers arrested seven people connected to an outspoken pro-democracy news website and raided the site’s headquarters on Wednesday, in yet another government crackdown on the city’s once-vibrant independent press.

Within hours, the site, Stand News, announced that it would shut down immediately, and its website and social media pages would be deleted within a day. All employees were dismissed.

“Stand News’s editorial policy was to be independent and committed to safeguarding Hong Kong’s core values of democracy, human rights, freedom, the rule of law and justice,” the announcement said. “Thank you, readers, for your continued support.”

The seven were arrested on suspicion of conspiring to publish seditious material, according to the police. A senior official, Steve Li, accused the publication at a news conference of publishing “inflammatory” content intended to incite hatred toward the government and the judiciary, especially through its coverage of the city’s fierce pro-democracy protests in 2019.

John Lee, Hong Kong’s No. 2 official, told reporters at a separate news conference that journalism could not be used as a screen for endangering national security.

“If there is anyone that uses the news as a guise, and in reality uses journalism as a tool to commit illegal acts, they are the black sheep of journalism,” he said when asked about Stand News. “Real, professional journalists should oppose that in unison, say no in unison and keep their distance.”

Hong Kong officials have targeted critics across civil society, including in the news media, since the Chinese Communist Party imposed a national security law on the city in June 2020 to quell the fierce, at-times violent protests in 2019.

Earlier this year, Apple Daily, perhaps the city’s best-known pro-democracy newspaper, was forced to close after multiple police raids of its newsroom and the arrests of several top editors and its founder, Jimmy Lai.

On Tuesday, Mr. Lai was charged with a new accusation of sedition related to the newspaper, as were six other former senior employees. Mr. Lai, one of Hong Kong’s most prominent opposition voices, had already been sentenced to 20 months in prison in relation to his support of the pro-democracy movement, and he faces up to life in prison on other charges.

Officials have sent warning letters to news outlets about coverage they dislike, and several foreign journalists have been denied visas to work in the former British colony. The government has also announced plans to enact a law against so-called fake news.

After Apple Daily folded, Stand News — which was founded as a nonprofit in 2014 after an earlier round of mass pro-democracy protests that year — became one of the city’s last openly pro-democracy outlets. Officials made clear that it could be targeted next.

Hong Kong’s security secretary, Chris Tang, this month accused the news site of “biased, smearing and demonizing” reports about conditions at a prison. Lau Siu-Kai, an adviser to Beijing, was even more blunt, telling Chinese state media that “the survival room” for opposition news outlets was shrinking.

“Stand News will come into an end,” Mr. Lau said.

The arrests on Wednesday began around 6 a.m., according to videos and posts shared on Facebook, when officers arrived at the homes of current and former Stand News staff members, including Ronson Chan, a deputy editor, and Denise Ho, a popular local singer who had served on the organization’s board.

Around the same time, more than 200 officers entered the publication’s headquarters in Hong Kong and conducted a search, the police said. Footage and photos reviewed by The New York Times showed officers stringing orange tape across a hallway inside the office building, and wheeling suitcases and boxes containing computers and other materials out of the newsroom. A photo showed at least two dozen large blue plastic boxes stacked in the building’s lobby.

Six of those arrested were former or current senior staff members of Stand News, the police said, though they did not release names. The footage reviewed by The Times showed Patrick Lam, the acting editor in chief, being escorted from his home in handcuffs. Another arrested was Chung Pui-kuen, a former editor-in-chief, according to Mr. Chan, the deputy editor, who spoke to reporters after being questioned by police and then released.

The authorities did not specify the identity of the seventh person, but local media reported that she was a former Apple Daily executive who had also written for Stand News.

Stand News had forged a reputation as a plucky operation that mixed diligent coverage of protests, trials and other political issues with lifestyle pieces and hyperlocal features.

During the 2019 protests, Stand News reporters documented episodes including a mob attack on pro-democracy protesters in a subway station; one reporter, Gwyneth Ho, was herself attacked. (Ms. Ho, who later resigned to enter politics, is now in jail.)

After the security law, the authorities’ pressure quickly mounted. In June, Stand News removed online commentaries published in May or earlier, noting that Hong Kong was beginning to target “speech crimes.”

It was not immediately clear whether the outlet would face charges under the national security law, which can carry severe sentences up to life imprisonment. The sedition charge does not fall under the security law, instead stemming from a colonial-era ordinance.

Legal experts said the authorities were blurring the lines between the security law and other criminal laws in Hong Kong, essentially allowing the security law’s more sweeping provisions, such as stricter bail conditions, to be used in more cases.

“The level of human rights protections, including the right to fair trial, under the N.S.L. is much lower,” said Senia Ng, a Hong Kong lawyer and member of the opposition Democratic Party, using an acronym for the national security law.

For many Stand News employees and in Hong Kong’s media sphere more broadly, Wednesday’s crackdown, though expected, was still chilling.

The Hong Kong Journalists Association, a trade organization of about 500 local journalists, said in a statement that it was “deeply concerned that the police have repeatedly arrested senior members of the media and searched the offices of news organizations containing large quantities of journalistic materials within a year.”

The association has itself come under intense pressure from the authorities. Mr. Tang, the security secretary, accused it in September of “infiltrating” campuses and leading student journalists astray.

The association’s chairman is Mr. Chan, the Stand News editor whose home was searched on Wednesday. He was released around noon after being questioned, and he told reporters that the police had seized his laptop, phone and iPad, as well as bank documents and his press accreditation.

“Stand News has always reported professionally,” Mr. Chan said. “This is obvious for the whole world to see.”

Hong Kong officials have denied any crackdown on press freedom. In an appearance at the Foreign Correspondents Club of Hong Kong in September, Regina Ip, a pro-Beijing lawmaker, pointed to Stand News as proof that freedom of speech was intact.

“The freedom of expression is still alive and well,” she said. “Hong Kong Stand News, all these websites are still carrying on as usual.”