How El Salvador Is Testing Bitcoin’s Promise of Financial Liberty 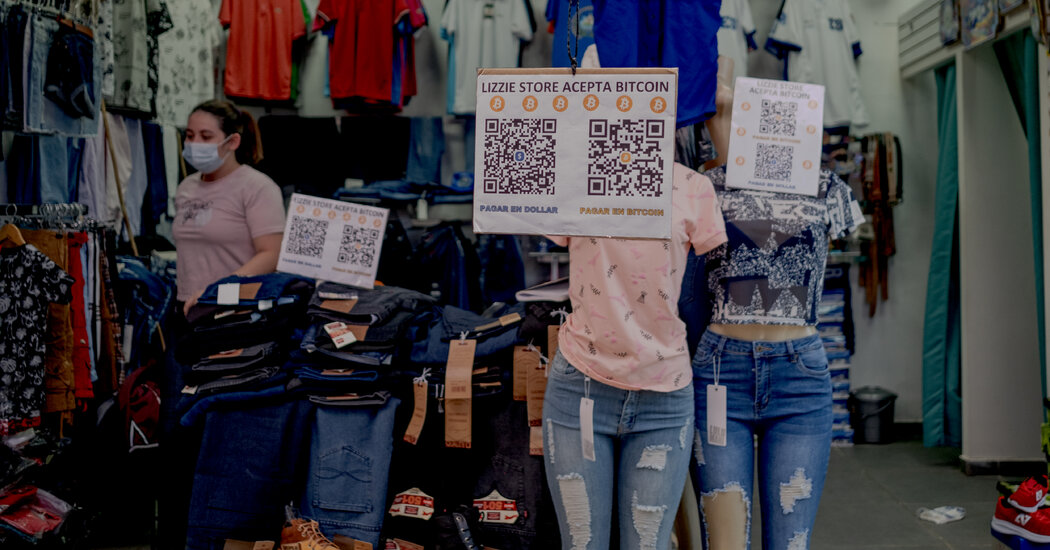 SAN MIGUEL, El Salvador — Bitcoin’s proponents dream of a financial system largely free of government meddling. But the first time that cryptocurrency became a national currency, it was imposed on an unwilling population by an increasingly authoritarian ruler using a secretive state-run system.

The surprising announcement last month that El Salvador had adopted bitcoin, the world’s largest cryptocurrency, as legal tender caught its population by surprise, and made the poor, conservative Central American nation an unlikely bellwether of a global technological transformation.

The outcome of the uncharted experiment could help determine whether cryptocurrency delivers the freedom from regulation that its proponents envision — or whether it becomes another tool of control and enrichment for autocrats and corporations.

“We’re now at a turning point in cryptocurrency,” said Lane Rettig, an entrepreneur and former senior programmer at the Ethereum Foundation, an organization that supports the technologies behind Ethereum, the world’s second-largest cryptocurrency. “The same technology of freedom could become part of a new technological dystopia.”

The threat of government and corporate subversion of cryptocurrency’s libertarian roots echoes, in part, the evolution of digital technologies like the internet and social media, Mr. Rettig said. Built on the democratic premise of liberating information and connecting people, these innovations have proved vulnerable to censorship, manipulation by propagandists, and control by profit-driven corporations, he said.

And now, after years of largely ignoring cryptocurrencies, governments around the world are scrambling to respond to the mushrooming $2 trillion industry as it begins to disrupt banking and seep into everyday lives.

In June, El Salvador’s 40-year-old, populist president, Nayib Bukele, announced that he would make bitcoin — a highly volatile financial token operated by a decentralized community of technology entrepreneurs — the national currency, on a par with the current legal tender, the U.S. dollar.

“This will generate jobs and help provide financial inclusion to those outside the formal economy,” Mr. Bukele said in a video address. He also said it would turn the country into an innovation and tourism hub.

The idea stemmed from a social experiment started in 2019 in the Salvadoran surfing town of El Zonte, where grass roots activists used a bitcoin donation to create a community network of cryptocurrency payments. The project, Bitcoin Beach, overcame the residents’ distrust by integrating the currency into everyday lives, using bitcoin to reward students for doing homework and to provide pandemic aid to families.

“Our strategy to create an ecosystem where bitcoin would work is based on two elements: time and trust,” said Luis Morales, a Bitcoin Beach organizer.

Both elements are conspicuously missing from Mr. Bukele’s strategy.

According to a poll conducted by El Salvador’s chamber of commerce, businessmen, international organizations and 93 percent of Salvadoran people opposed the adoption of bitcoin.

“We all understand that cryptocurrency is the future, but you can’t foster it by forcing everyone to use it,” said Jorge Hasbún, the head of the commerce chamber.

To promote the currency’s use, the government has created a cellphone application — Chivo Wallet — which allows citizens, including many who do not have bank accounts, to send and receive bitcoin-denominated claims, convert them to dollars and withdraw them from special A.T.M.s. It also gave $30 in bitcoin to every Salvadoran who adopts the wallet.

But the app has been plagued by technical failures, and many A.T.M.s ran out of money as people rushed to convert bitcoin holdings into the more stable dollar bills.

The government also said it has set aside $150 million, equivalent to 12 percent of El Salvador’s public investment budget last year, to ensure bitcoin’s free convertibility into dollars. Officials offered no explanation on how they will prevent the use of bitcoin for money laundering, or what would happen if the conversion fund ran out of cash.

Despite shortages of public funds, Mr. Bukele announced in a series of Twitter postings that his government bought about $30 million worth of bitcoin last month. When the cryptocurrency’s price temporarily plunged afterward, he announced new purchases, their purpose unexplained.

Nearly a month after the introduction of bitcoin, it remains unclear where the dollar funds and the bitcoin held by the government, or reflected in Chivo Wallets, are, or what they are worth.

Although all bitcoin transactions carry a code to ensure transparency, Mr. Bukele has treated the bitcoin policy as a state secret. He has classified all information related to Chivo Wallet, which was created with taxpayer funds, but is run as a private enterprise by undisclosed individuals.

“He is playing Russian roulette with public money,” said Ruth López, a Salvadoran lawyer at the nonprofit organization Cristosal, which sued the government over the Chivo Wallet’s financing irregularities.

Mr. Bukele, his ministers of economy and finance, the trade secretary, the attorney general, the head of the congressional economic committee, the financial regulator, the central bank and the state bank financing the bitcoin fund all declined to comment.

On the streets, the policy’s impact has been mixed.

Mr. Bukele says three million Salvadorans, or more than half of all adults, have installed Chivo Wallet, but in reality, the use of bitcoin remains limited. Most fear the cryptocurrency’s extreme price volatility, say they lack technological skills or distrust the government’s intentions.

But the cryptocurrency has allowed at least some Salvadorans without bank accounts to access digital payments, invest savings or boost earnings, and its use is gradually picking up among the youth.

In the provincial city of San Miguel, the Argueta Pérez family said sales of streetwear from their market stalls rose after they put up signs saying they accept bitcoin.

Nearby, Laura Trejo, 29, a student, lined up outside a Chivo A.T.M. to withdraw remittances sent by her uncle, without paying a commission. Next to her, José Ercidio, 50, a vegetable vendor, waited his turn. He said Chivo Wallet had allowed customers to send him small sums, boosting sales.

“It’s a benefit for the poor and humble people,” he said.

Last month Mr. Bukele, in an apparent joke targeting critics, changed his Twitter profile to read, “the coolest dictator in the world.” But, as he rapidly consolidates power and cracks down on opponents, there are growing concerns in El Salvador that Mr. Bukele’s adoption of bitcoin was motivated more by his quest for control — and desire to avoid international pressure — than by his desire for financial inclusion.

As Mr. Bukele has tightened his control on the nation, relations with the Biden administration have deteriorated, making Mr. Bukele increasingly concerned about Washington’s outsized influence on the country’s economy, said two Salvadoran officials familiar with the president’s thinking. They spoke on condition of anonymity to avoid reprisals.

For example, remittances sent by immigrants, primarily from the United States, account for a quarter of the country’s gross domestic product. By building a parallel financial system based on cryptocurrency, Mr. Bukele could bypass the American banking system and keep the remittances flowing into the state-run Chivo Wallet in the event of future economic pressure from Washington, the two officials said.

Other countries already facing sanctions, including Venezuela and North Korea, are believed to have used cryptocurrency to avoid oversight.

“For the government, bitcoin is about having a Plan B,” said Ricardo Castaneda, a Salvadoran public policy expert.

The adoption of bitcoin has also deepened Mr. Bukele’s impasse with international lenders. His talks with the International Monetary Fund over a crucial $1 billion loan have stalled, as the lender became increasingly concerned about the deterioration of the rule of law and bitcoin’s threat to financial stability.

The government is now exploring ways to issue sovereign bonds tied to bitcoin and to create new bitcoin with geothermal power. Both moves could create an alternative source of funding that bypasses traditional lenders demanding accountability, experts said.

“What Bukele is doing is not bitcoin, but a centralized, state-run banking system,” said Mario Gómez, a Salvadoran data expert who was detained by police and held for six hours last month on unspecified accusations of financial crimes after organizing social media seminars about cryptocurrency risks. “It is the antithesis of the principles of bitcoin champions.”