Home World How the Kremlin Is Militarizing Russian Society
World 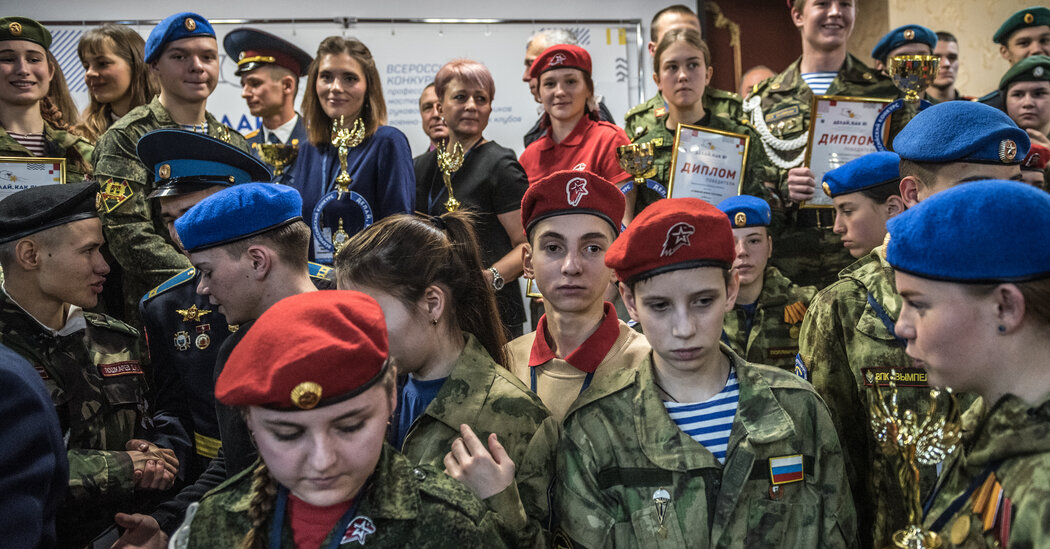 MOSCOW — Stepping onto a podium in heavy boots and military fatigues at a ceremony outside Moscow, six teenagers accepted awards for an increasingly important discipline in Russia: patriotism.

For days, students from around the country had competed in activities like map-reading, shooting and history quizzes. The contest was funded in part by the Kremlin, which has been making “military patriotic” education a priority.

“Parents and children understand that this aggressive shell around us, it is tightening, it is hardening,” said Svyatoslav Omelchenko, a special forces veteran of the K.G.B. who founded Vympel, the group running the event. “We are doing all we can to make sure that children are aware of that and to get them ready to go and serve.”

Over the past eight years, the Russian government has promoted the idea that the motherland is surrounded by enemies, filtering the concept through national institutions like schools, the military, the news media and the Orthodox Church. It has even raised the possibility that the country might again have to defend itself as it did against the Nazis in World War II.

Now, as Russia masses troops on the Ukrainian border, spurring Western fears of an impending invasion, the steady militarization of Russian society under President Vladimir V. Putin suddenly looms large, and appears to have inured many to the idea that a fight could be coming.

“The authorities are actively selling the idea of war,” Dmitri A. Muratov, the Russian newspaper editor who shared the Nobel Peace Prize this year, said in his acceptance speech in Oslo this month. “People are getting used to the thought of its permissibility.”

While there is no surging war fever taking hold, there are plenty of signs that the government has been nurturing a readiness for conflict. A $185 million four-year program started by the Kremlin this year aims to drastically increase Russians’ “patriotic education,” including a plan to attract at least 600,000 children as young as 8 to join the ranks of a uniformed Youth Army. Adults get their inculcation from state television, where political shows — one is called “Moscow. Kremlin. Putin.” — drive home the narrative of a fascist coup in Ukraine and a West bent on Russia’s destruction.

And all are united by the near-sacred memory of Soviet victory in World War II — one that the state has seized upon to shape an identity of a triumphal Russia that must be ready to take up arms once more.

Aleksei Levinson, the head of sociocultural research at the Levada Center, an independent Moscow pollster, calls the trend the “militarization of the consciousness” of Russians. In the center’s regular surveys, the army in 2018 became the country’s most trusted institution, surpassing even the president. This year, the share of Russians saying they feared a world war hit the highest level recorded in surveys dating to 1994 — 62 percent.

This does not mean, Mr. Levinson cautioned, that Russians would welcome a bloody territorial conquest of Ukraine. But it does mean, he said, that many have been conditioned to accept that Russia is locked in an existential rivalry with other powers in which the use of force is a possibility.

Celebration of the Soviet Union’s victory over Nazi Germany in World War II — referred to as the Great Patriotic War in Russia — has played the most important role in that conditioning. Rather than promoting only a culture of remembrance of Soviet heroism and 27 million lives lost, the Kremlin applies the World War II narrative to the present day, positioning Russia as once again threatened by enemies bent on its destruction.

In his annual Victory Day speech this year after a monumental military parade, Mr. Putin tore into unnamed present-day enemies of Russia who were redeploying the Nazis’ “delusional theory of their exclusivity.” On state TV last week, a news show host ridiculed sanctions threats against Russia from those “who have no idea how to scare a people that lost more than 20 million of its men, its women and its elderly and kids in the last war.”

A popular World War II bumper sticker reads, “We can do it again.”

“There’s a transposition taking place of this victory” — in World War II — “into the present-day confrontation with the NATO bloc,” Mr. Levinson said.

One hour west of Moscow, the grand Cathedral of the Russian Armed Forces opened last year. Its exterior is army green and its floors are made from weapons and tanks seized from the German Wehrmacht. Arched stained glass windows feature insignia and medals.

On a recent Sunday, the church and its accompanying museum and park were full of visitors. A group of fifth graders from the Suvorov Military School in Tver, wearing their uniforms, filed out in two lines before marching to the museum. Their instructor said it was fundamentally important for the students, in their first year of military school, to learn about their predecessors.

“We’re doing a bit of propaganda, too,” the section leader quipped, declining to give his name.

Beyond the church grounds, visitors walked among snow-covered trenches in a simulated front line. Further afield, under the towering dome of the church, children could ride around a go-kart like track in a miniature replica of a battle tank.

“All children should come here and develop an interest in history from an early age,” said Alina Grengolm, as her 2-year-old son scrambled up an icy tank with his father’s assistance.

In Moscow recently, more than 600 people from across Russia gathered for a government-sponsored forum aimed at promoting patriotism among youth. Sergei Kiriyenko, Mr. Putin’s powerful deputy chief of staff, praised the attendees for doing “sacred work.”

At the conference, two “victory volunteers” spoke about their plans for teaching high school students about the Russian World War II victory at a regional event the following week.

In a Levada poll published last week, 39 percent of Russians said war between Russia and Ukraine was either inevitable or very likely. Half said the United States and NATO were to blame for the recent rise in tensions, and no more than 4 percent — across all age groups — said Russia was at fault.

The conviction across society that Russia is not the aggressor reflects a core ideology dating to Soviet times: that the country only fights defensive wars. The government has even earmarked money for movies that explore that theme: In April, the Culture Ministry decreed that “Russia’s historical victories” and “Russia’s peacekeeping mission” were among the priority topics for film producers seeking government funding.

“Right now, the idea is being pushed that Russia is a peace-loving country permanently surrounded by enemies,” said Anton Dolin, a Russian film critic. “This is contradicted by some facts, but if you show it at the movies and translate that idea into the time of the Great Patriotic War, we all instantly get a scheme familiar to everyone from childhood.”

On Russian state television, the narrative of a Ukraine controlled by neo-Nazis and used as a staging ground for Western aggression has been a common trope since the pro-Western revolution in Kyiv in 2014. After the revolution, Russia annexed the Ukrainian peninsula of Crimea, fomented a war in Ukraine’s east and sharpened its messaging about Russia as a “besieged fortress.”

Some analysts fear that the escalating rhetoric is laying the foundation for what Russia would cast as a defensive intervention to protect its security and Russian speakers in Ukraine. Yevgeny Popov, a newly elected member of Parliament and a host of a popular political show on state TV, said in an interview that his ratings were up in recent weeks — “the tension is rising,” he said.

“I think that most people in Russia would only be in favor if we defended Russian people who live in these territories,” Mr. Popov said, referring to the separatist territories in Ukraine where hundreds of thousands have received Russian citizenship.

The effectiveness of the state’s militarized messaging is up for debate. Polls show that young people have a more positive view of the West than older Russians, and the pro-Kremlin sentiment prompted by the Crimea annexation appears to have dissipated amid economic stagnation.

But the Kremlin is doubling down. Its drive to increase “patriotic education” includes funding for groups like Vympel. The “military patriotic” organization has some 100 chapters around the country, and it organized the recent skills competition in the city of Vladimir that ended on Thursday.

Veronika Osipova, 17, from the city of Rostov-on-Don near Ukraine’s border, won the award for best female student. For years, she played the harp, graduating with honors from an elite music school. But in 2015, she started learning how to shoot a machine gun and throw grenades. She resolved to join the Russian military to protect the country against its enemies.

“I follow the example of girls who, under bullets and grenades, went to fight during the Great Patriotic War,” Ms. Osipova said. “They had no choice, but we do have it, and I choose the army.”

ImageA Syrian campaigner holding pictures of civil war victims outside the courthouse where Anwar Raslan, a former Syrian officer, was on trial on...
Read more
World

China Holds the Line on ‘Zero Covid,’ but Some Wonder for How Long

In a glitzy Shanghai shopping district, about 40 people who happened to be at a Uniqlo store were informed that they would be...
Read more
World

The events themselves took a matter of minutes to unfold in a paroxysm of one-sided gunfire that snuffed out more than a dozen...
Read more