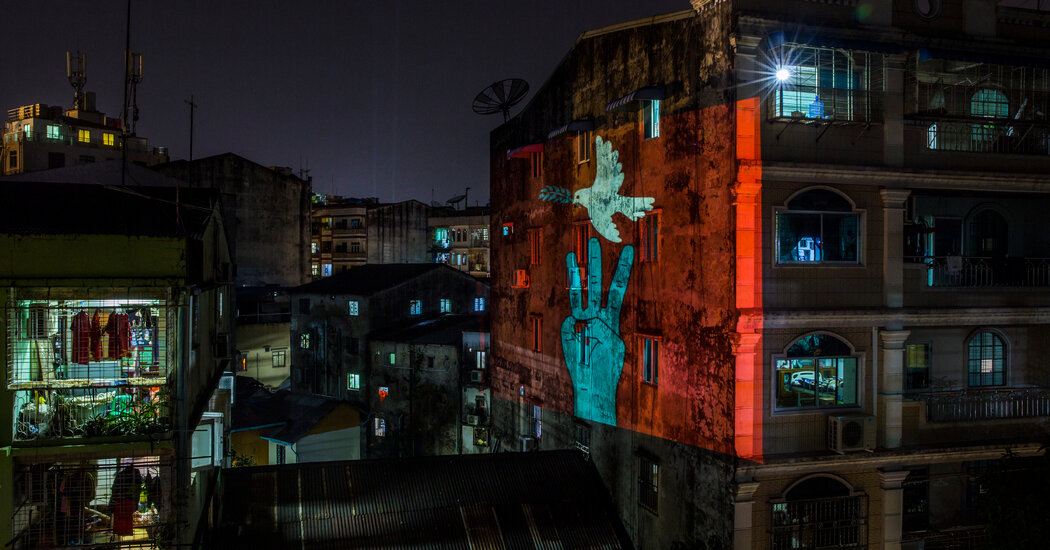 Most nights since a coup returned Myanmar to military rule on Feb. 1, a spectral symbol of protest has glowed on a mildewed side of a building.

Where the next illumination will appear in Yangon, the country’s biggest city, is a mystery. But, suddenly, a projected image appears in the dark. Three fingers raised in a rebellious pose. A dove of peace. The smiling face of Daw Aung San Suu Kyi, whose government was ousted in the army putsch.

The projections are the brainchild of a filmmaker who wishes to remain anonymous as the military hunts down those who dare to defy it.

Armed with paintbrushes, poems and protest anthems, the creative classes are providing Myanmar’s mass uprising with an imaginative verve and rebellious spirit that has caught the military generals off guard.

On Wednesday, in the biggest single rally since street protests began in Yangon, hundreds of thousands of people gathered in a central district, holding up posters and signs designed for the Instagram generation.

“If we look at the history of resistance in Myanmar, we were quite aggressive and confrontational, with this history of bloodshed,” said Ko Kyaw Nanda, a graphic designer whose protest art contrasts green pig heads (the army) with ruby red heels (Ms. Aung San Suu Kyi). “With this new approach, it can be less risky for people, and more people can join.”

Myanmar’s military, which has ruled the nation for most of the past six decades, has locked up more than 450 people since the coup, according to a group that tracks political prisoners. The new regime has drastically diminished civil liberties, and its long history of violently suppressing dissent lingers. Security forces have shot and beaten anti-coup protesters. On Wednesday evening in the city of Mandalay, soldiers swept through an area housing railway workers who were boycotting work, shooting multiple rounds. At least one person was confirmed injured. but the weapons of dictatorship have not deterred peaceful demonstrators, who have depended on humorous memes and protest art to carry them through.

“If the young people are out on the street then why can’t I be?” said Daw Nu Nu Win, a retired civil servant who at the rally on Wednesday carried a laminated sign with the face of Ms. Aung San Suu Kyi. “I want the whole nation to be out from under dictatorship.”

Online art collectives have made their designs free so that protesters can print them out for signs, stickers or T-shirts. One of the most popular pieces shows a collection of hands arranged in the three-finger salute from “The Hunger Games” films. Each hand was drawn by a different artist, a mosaic of defiance.

As she watched the protests grow, a freelance graphic designer who goes by the artistic name Kuecool decided she wanted to contribute. Although she had illustrated a book on feminism, she had not considered herself overtly political during her years of working at a public relations agency.

The overthrow of the elected government by the military, which she had grown up disliking, shocked her. She began drawing into the night.

One of her images is now used often in the protest movement: a young woman in a traditional sarong brandishing a wok and a spatula. The background is crimson, the signature hue of the National League for Democracy, which was ejected from government despite winning two landslide electoral victories.

Every night at 8 p.m., cities across Myanmar have clanged with the din of people banging pots, pans, woks and anything else that makes a ruckus. The aim is to ward off the devil, and the projection art appears at this time, too, adding visuals to the clamor of discontent.

Myanmar’s military rulers have long seen menace in the arts, imprisoning poets, actors, painters and rappers. Among the dozens of people nabbed alongside Ms. Aung San Suu Kyi in the coup’s initial pre-dawn raids were a filmmaker, two writers and a Reggae singer. A graffiti artist whose protest tags have enlivened Yangon over the past two weeks said he was on the run from the police. So were two poets. On Wednesday, arrest warrants were issued for actors, directors and a singer.

Ko Zayar Thaw was a member of Generation Wave, a hip-hop collective that challenged the former ruling junta through sly lyrics. After serving five years in prison for his activism, he joined the National League for Democracy when it contested a by-election in 2012. Mr. Zayar Thaw won a parliamentary seat in a district once thought of as a military stronghold, settled down with reams of parliamentary paperwork and thought he had left his days of artistic protest behind him.

“Hip-hop artists already have a culture of revolution, so in our generation we protested through songs,” he said. “Now all kinds of artists are involved because they don’t want to lose the value of democracy.”

The artistic ferment in Myanmar today has drawn from other regional protest movements. During their months of sustained dissent in Hong Kong, young protesters enlivened their rallies with cute cartoons and colorful walls of sticky notes that evoked the so-called Lennon Wall in Prague, where art and messages of dissent against communism proliferated. Motivated by an earlier incarnation of opposition, the Hong Kong protesters popularized the use of the yellow umbrella against water cannons and turned it into a powerful meme.

In turn, the Hong Kong democracy movement galvanized pro-democracy demonstrators in Thailand, who staged months of mass rallies last year. Encouraged by the power of whimsy in Hong Kong, the Thai protesters, who have been standing up to a prime minister who led a 2014 military coup, deployed inflatable rubber duck rafts to ward off water cannons. They popularized the use of “The Hunger Games” salute, which Thailand’s former junta initially tried to ban with their state of emergency powers. (Nobody really listened.)

A couple days after the putsch in Myanmar, doctors, who launched a civil disobedience movement that has now compelled about 750,000 people to stop going to work, flashed their three fingers in protest. The salute is now the leitmotif of the Myanmar rallies, along with signs in English — all the better to attract international attention — denouncing the military takeover.

“I got inspired by how Hong Kong and Thai protesters used creativity and humor in their protests,” said Mr. Kyaw Nanda, the graphic designer.

The crosscurrents of protest are flowing both ways. Last week, a Thai youth group adopted the pots and pans campaign from Myanmar for a protest in Bangkok.

“In the region, there is a fight for democracy, human rights and justice,” said U Aye Ko, a painter in Myanmar whose art has long expressed political yearnings. “The movement is beyond one nation’s issue. We have all joined together in the resistance against oppression.”