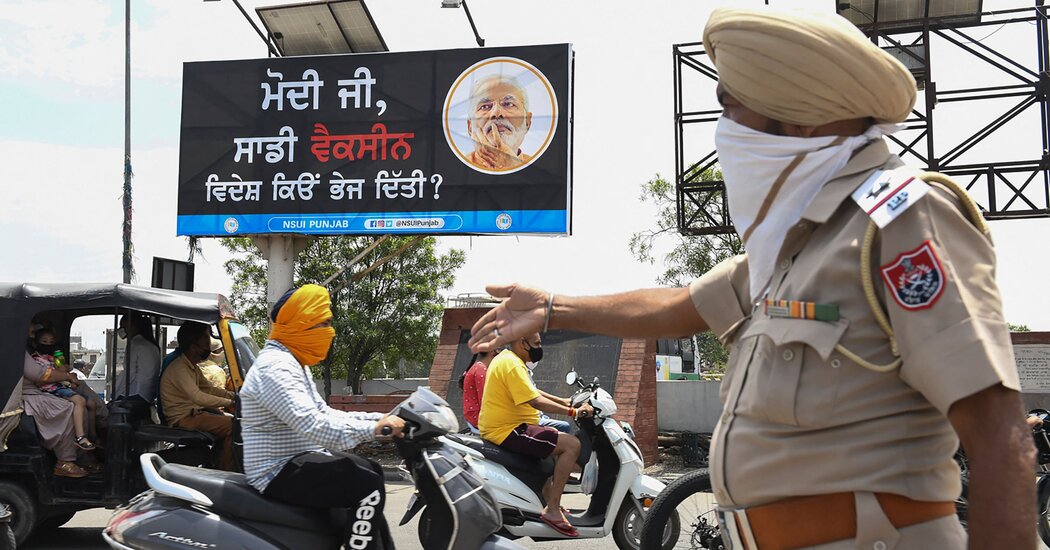 The officers from India’s elite antiterrorism police unit descended after dusk on the New Delhi offices of Twitter, with television news cameras in tow. Their mission: Start an argument over fake news.

The offices sat empty, closed amid India’s devastating coronavirus outbreak. And the police acknowledged that they were there to deliver nothing more legally binding than a notice disputing a warning label that Twitter had assigned to some tweets.

But symbolically, the visit by the police on Monday night sent a clear message that India’s powerful ruling party is becoming increasingly upset with Twitter because of the perception that the company has sided with critics of the government. As anger has risen across the country over India’s stumbling response to the pandemic, the government of Prime Minister Narendra Modi and his Bharatiya Janata Party have struggled to control the narrative.

As a result, top Indian political leaders have applied increasing pressure on Twitter, Facebook and other platforms that people are using to air their complaints. In doing so, they are following the path of some other countries trying to control how and where messages can spread on social media. In March, for example, the Russian government said it would slow access to Twitter, one of the few places where Russians openly criticize the government.

The police visit “illustrates the extent to which state machinery can be instrumentalized by the party in power to curb opposing voices and mishandle the opposition,” said Gilles Verniers, a professor of political science at Ashoka University near New Delhi.

“Regardless of the clumsy manner in which it was conducted, this raid is an escalation in the stifling of domestic criticism in India,” he said.

For example, the police visit was set off by labels that Twitter applied to tweets posted by senior members of the party, called the B.J.P.

Party leaders posted documents that they called irrefutable proof that opposition politicians had planned to use India’s stumbling coronavirus response to tar Mr. Modi and India’s reputation itself.

But Twitter undercut that campaign when it labeled the posts “manipulated media.” Indian disinformation watchdog groups had said the documents were forged.

In going after Twitter, the B.J.P. focused on one of the main ways people in India pleaded for help as infections began to soar in April and people began to die by the thousands per day. Hospital beds, medicine and supplemental oxygen became precious commodities. Online networks sprang up on Twitter and other social media platforms for volunteers to connect desperate patients with supplies.

The second wave of the coronavirus reached a peak on May 6 — 414,188 fresh infections. Since then, cases have fallen by nearly half, but the overall death toll, 303,720, continues to rise.

The B.J.P. is no slouch at social media. Under Mr. Modi, it has used social media to spectacular effect, pushing its Hindu nationalist agenda to far corners of the country and to denigrate its opponents.

But as dissenting voices rise, and the B.J.P.’s tolerance for dissent grows short, it has used harsher tactics to rein the platforms in.

This month, the government ordered social media platforms, including Twitter, to take down dozens of posts critical of the government’s handling of the pandemic.

In February, as a farmer-led protest against agriculture changes captured the public imagination, the company acquiesced to government demands and blocked the accounts of 500 people accused of making inflammatory remarks about Mr. Modi.

Though Mr. Modi’s government controls the Delhi police, it was not clear on Tuesday that the failed mission at the Twitter office had happened at its behest.

A B.J.P. spokesman did not immediately respond to a request for comment. A Twitter spokeswoman asked for questions in an email, which went unanswered.

On May 18, a B.J.P. spokesman, Sambit Patra, tweeted the picture of a document he described as plans by the Indian National Congress, the main opposition party, for making the government look bad.

Mr. Patra’s message was retweeted more than 5,000 times, including by ministers in Mr. Modi’s government and party leaders.

“It’s deplorable on their part to attempt to spread misinformation during this global catastrophe just to swell their dwindling political fortunes at the expense of people’s suffering,” Dr. Vardhan tweeted.

Except that the plans were fake, doctored on old letterhead, said independent fact-checking organizations and the Congress Party, which filed a police report against Mr. Patra and another B.J.P. leader. Last Thursday, Twitter stepped in, labeling the tweet “manipulated media” — and provoking the ire of government supporters who demanded that the Indian government ban the company.

Many blame the disaster that India is experiencing now on government hubris. While cases were rising in March, Mr. Modi was campaigning for state elections. His government signed off on a religious festival that drew millions of Hindus to the Ganges River banks.

Mr. Modi, who gave regular, rousing national addresses during the first wave of cases, has become less visible during the second wave. Many Indians feel abandoned. With local pandemic lockdowns still in place, rather than take to the streets, protesters are confined to social media.

Last month, while the number of virus infections and deaths skyrocketed, at least 25 people were arrested after hanging posters in Delhi that questioned India’s decision to export vaccines abroad.

The posters were made by the ruling party in Delhi, another party in opposition to the B.J.P., according to a party member, Durgesh Pathak.

“In a democracy, to ask a question is not wrong,” Mr. Pathak said. “I am not abusing anybody. I am not instigating anybody for violence. I am not asking anybody to do any wrong thing. I am asking a question to the prime minister of my country.”

Robert Malone Spreads Falsehoods About Vaccines. He Also Says He Invented Some.

“And almost without exception, these influencers feel that they have been wronged by mainstream society in some way,” Mr. Brooking added.Dr. Malone earned...
Read more
Business