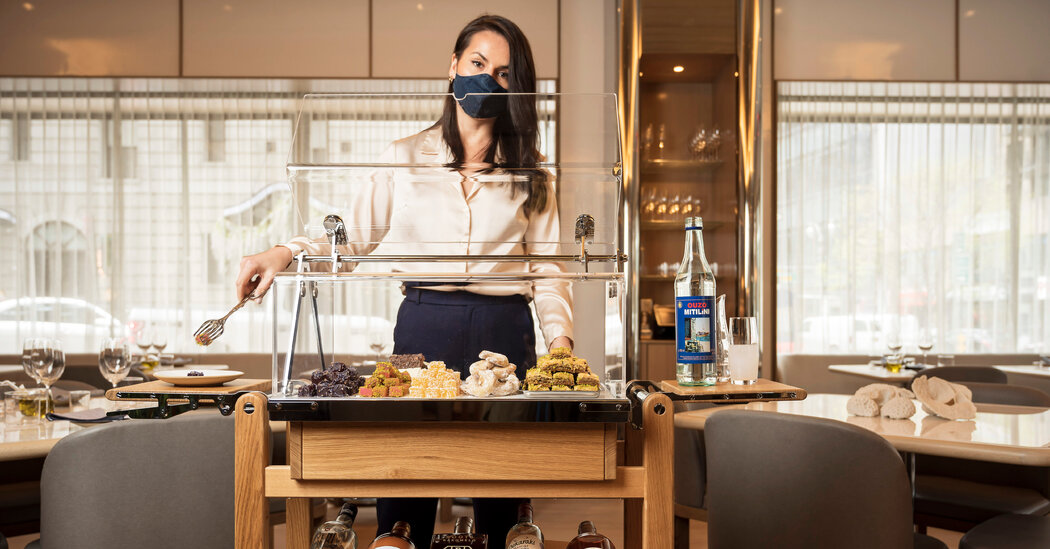 With its November opening derailed by the pandemic, this elegant addition to Midtown Manhattan dining, from the chef and restaurateur John Fraser, is now ready for business. The food makes clear Mr. Fraser’s Greek heritage, something that was less evident in his other ventures, like the Loyal and the North Fork Table, which he recently reopened in Southold, N.Y. You also may have sampled some of his Greek dishes at Snack Taverna in the West Village. He calls his new restaurant “a bit of a homecoming,” he said. “It’s the food I really love.” Among the dishes are tzatziki flecked with sorrel; lamb tartare with ramp labneh; lemon potato salad; sweetbread kokoretsi with purslane and lemon; snapper braised with leeks and Kalamata olives; lamb marinated in mastic and served with scallion pancakes. And it’s not just about Greece. There are Turkish flatbreads and lamb meatballs. The executive chef is Rob Lawson, who was with Mr. Fraser at 701West in the Times Square Edition. With his beverage director, Amy Racine, Mr. Fraser has assembled a wine and spirits list that includes many selections from Greece and Turkey. In addition, Ms. Racine manages a roving cart of sweet and digestif libations from Greece and Turkey that are served with typical sweets. There are outdoor tables as well as 68 seats indoors at 50 percent capacity. (Opens Wednesday)

This restaurant, in Eataly’s financial district location, has joined forces with Color Factory, an interactive art gallery in Hudson Square, to create a menu, décor and installations that emphasize color. Cheese of varying golden hues presented on an artist’s palette, squid ink risotto, and pizza dressed in the green of spring peas give you some idea. They’re having fun. Special events and work with EnChroma, a company that produces special lenses for people with color blindness, are also part of the project. (Wednesday)

The inspirations for this rustic, mostly vegan spot is beachy Baja California. Dishes include a vegan tostada with brussels sprouts, beet tacos, root vegetable ceviche and a birria quesadilla. Food is available à la carte, or by advance reservations for a $89 prepaid three-course menu that includes three cocktails and gratuity.

The food at this inviting spot touches on several regions of Italy with Neapolitan-style pizza, cacio e pepe and fritto misto. The chef, Pietro Aletto, worked with Jonathan Benno and Andrew Carmellini. The restaurant is done in soft green and amber leather with natural, rustic elements.

Foods From Afar Hope to Catch the Eye of American Shoppers

Fonio, a cereal grain imported from West Africa, was once relegated to the shelves of tiny grocery stores frequented by immigrants primarily from...
Read more
Food

Sometimes All You Need Is a Perfect Rotisserie Chicken

Those breads are worth the trouble. Kevin Bruce, whose last job was kneading Danish rugbrod and grantoftegaard at Great Northern Food Hall, bakes...
Read more
Food

A Stew That Captures the Essence of the Sea

Daniela Narcisco, a Brazilian cookbook author and food historian based in Florianópolis, the capital of Santa Catarina, Brazil, describes moqueca as “a wonderful...
Read more