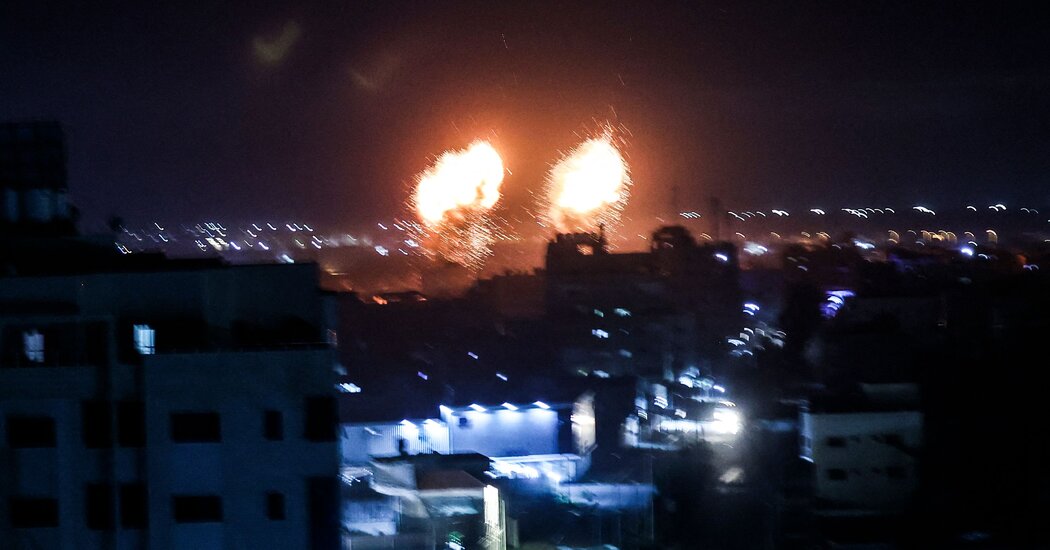 GAZA CITY — The Israeli military said early Wednesday that it had conducted airstrikes in the Gaza Strip, after officials said that the militant group Hamas had sent incendiary balloons into southern Israel from Gaza, in the first eruption of hostilities since an 11-day air war between Israel and Hamas ended last month.

The Israeli military said that it “struck military compounds belonging to the Hamas terror organization, which were used as facilities and meeting sites for terror operatives in Hamas’ Khan Yunis and Gaza Brigades.” Palestinian news reports said that one of the strikes caused property damage, but there were no immediate reports of casualties in Gaza, a densely populated urban strip.

The day of rising tensions was the first test of a new Israeli coalition government just three days into its term. It started when the government permitted a far-right Jewish march to pass through Palestinian areas of Jerusalem on Tuesday night, over the objections of Arab and leftist parties in the coalition, and despite threats from Hamas that it would retaliate.

The march was a scaled-down version of an aborted far-right procession originally planned for last month, which Hamas cited to justify firing rockets toward Jerusalem on May 10, setting off the latest air war between the militants and Israel.

Gaza has barely begun to recover from last month’s fighting, which killed at least 250 Palestinians and 13 Israeli residents, and damaged more than 16,000 homes in Gaza, according to the United Nations, and as Gaza militants fired more than 4,000 rockets into Israel. Rebuilding has yet to restart in earnest, and Israel and Egypt, which control access to Gaza, are still withholding key financial and material assistance.

Some analysts believed those factors kept Hamas from launching full-scale rocket attacks after Tuesday’s provocative Jewish procession through Jerusalem, an annual event known as the flags march. Hamas frequently releases incendiary balloons into southern Israel, and they tend to be less destructive than rockets, though they sometimes scorch large stretches of farmland and land near homes.

Israel’s new prime minister, Naftali Bennett, who was sworn in on Sunday, has taken a tough stance against the launching of these balloons in the past and criticized a previous government for its lack of response.

A few months before he was appointed defense minister in 2019, Mr. Bennett wrote in a tweet that those launching the balloons were “terrorists” who should be killed. According to Ynet, an Israeli news site, he also said that year that the balloons were life threatening and damaged Israeli deterrence against Hamas. “An explosive balloon is like an anti-tank missile,” he said, adding, “whoever launches one is a terrorist who is trying to murder Israelis and must be hit.”

The new government is under tremendous pressure from the right to be tough on Hamas — both internally, from Mr. Bennett and his Yamina party, and externally, from former Prime Minister Benjamin Netanyahu’s Likud party. Some members of the coalition insisted that any blocking of the flags march would be giving in to threats from terrorists.

“Israel cannot be a hostage of a terrorist organization,” Amos Yadlin, the former head of Israeli military intelligence, said in a radio interview on Tuesday. “As far as Hamas is concerned, it dictates to Israel what to do in Jerusalem — it must be shown that it did not win here.”

For right-wing and many centrist members of the alliance, including Mr. Bennett, the flags march is a matter of national pride: a celebration of their democratic right to walk through areas of Jerusalem captured by Israel during the 1967 Arab-Israeli war, which Israel now considers part of its undivided capital. Each year, it features thousands of marchers waving Israeli flags as they proceed toward the Western Wall, a sacred site in Judaism. But it was aborted in May because of the rocket fire from Gaza.

One of the last acts of Mr. Netanyahu’s government was to reschedule this year’s aborted march for Tuesday, its path rerouted from some of the most sensitive parts of the Old City of Jerusalem. The decision was upheld by Omer Bar-Lev, the new center-left minister for public security — to the praise of his new right-wing allies.

“I congratulate Public Security Minister Omer Bar-Lev for his decision to hold the flag dance,” tweeted Nir Orbach, a hard-right member of the coalition who almost dropped out of the alliance before the confidence vote. “The flag dance is part of the culture of religious Zionism and is held regularly. It does not need to be a political dance or proof of governance, it needs to be a display of joy.”

But to Arab and left-wing members of the coalition, it was a provocative gesture. It offends Palestinians, who do not celebrate the capture of East Jerusalem, which much of the world still considers occupied, and who hope it will one day form the capital of a Palestinian state. Palestinian families living on the route of the march often board up their homes and shops in anticipation of abuse and violence from the marchers.

This year, Palestinians felt there was a particular double-standard in the decision to allow marchers to proceed past Damascus Gate, a prominent entrance to the Old City, and to dance in an adjacent plaza that is central to Palestinian communal life in East Jerusalem. The police had kept the plaza off limits to Palestinians for much of the Islamic holy month of Ramadan — a decision that helped exacerbate the tensions in the city that formed the backdrop to the Gaza war.

“They open for their people and they close for mine,” said Samer Barusi, a 67-year-old Palestinian living near the route of the march, which he said showed how there was little difference between the new government and the one it replaced.

“It’s like the difference between Pepsi Cola and Coca-Cola,” Mr. Barusi said.

Waving Israeli flags, marchers streamed past Damascus Gate, many of them chanting, “The nation of Israel is alive.” Some younger marchers could be heard shouting threats to Palestinians, including, “Death to Arabs!”

Yair Lapid, the government’s centrist new foreign minister, later said the government had been right to allow the march to take place, but condemned the marchers’ rhetoric. “It is incomprehensible how it is possible to hold the flag of Israel in hand and yell ‘Death to Arabs’ at the same time,” Mr. Lapid wrote. “That is not Judaism or Israelism, and that certainly isn’t what our flag represents.”

Before the march, the government sent conciliatory messages to Arab leaders inside Israel and to the Palestinian Authority in the West Bank and Egypt, which frequently mediates between Israel and Hamas, making it clear that Israel was not looking for an escalation, officials said. New limits placed on the march included allowing only small, well-guarded groups of mostly teenage girls and women to pass through the Muslim Quarter of the Old City.

The police kept up a heavy presence, forcing Palestinian residents away from the route of the march for much of the afternoon, except for people who own or work in shops in the area. Several bystanders were detained by officers. One Palestinian man was filmed being beaten by officers as they cleared the area to make way for the marchers.

Mansour Abbas, the leader of Raam, an Arab Islamist party within the coalition, said he had not raised the march issue with Mr. Bennett.

“If we quarrel over everything, there is no doubt that this coalition will fall apart,” Mr. Abbas said in a radio interview on Tuesday. But he nevertheless also condemned the parade and said it should never have been allowed to go ahead.

“The flag march in Jerusalem is a wild provocation, which is mostly composed of screams of hatred and calls for violence and an effort to set the region on fire for political reasons,” he said. “The minister of public security and the police should have canceled it.”

Before the march, its opponents were clear that they feared another escalation in fighting with Hamas.

The main United Nations envoy in the region, Tor Wennesland, warned of rising tensions and asked all sides to “avoid any provocations that could lead to another round of confrontation.”

The U.S. State Department barred its employees from entering the Old City of Jerusalem on Tuesday.

Inter-communal violence between Jews and Arabs in Jerusalem and across Israel formed the backdrop to the recent war, and some feared a resurgence.

Hamas had threatened a violent response, while nevertheless hinting that it might not resort to something as drastic as rocket fire.

“What is certain is we can’t be silent in the face of the flags march, which is deeply provocative and part of the occupation’s internal politics,” said Mohammad Hamada, a spokesman for the militant group. “If the occupation carries out this arrogance, we have several options in front of us. Armed resistance from Gaza is not the only option. We have the Jerusalem and West Bank fronts, where we can participate in popular resistance. But we also do not rule out armed resistance.”