Italy Beats Austria, Adding Some Grit to Its Flash 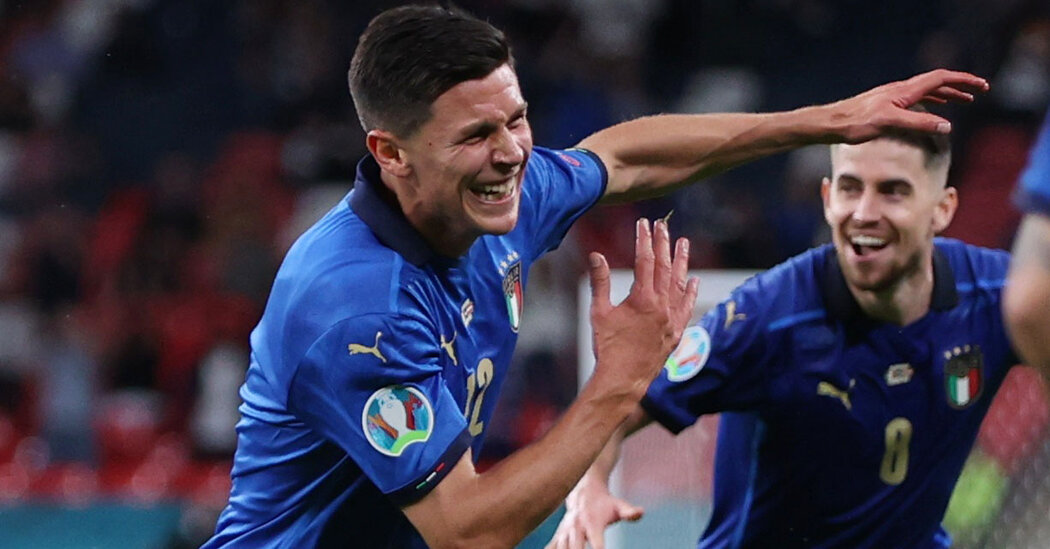 LONDON — The crucial first touch for the opening goal, the one that brought everything that followed into existence, came not from one of the traditional parts of a body used to control a ball — the foot, sometimes the head, maybe the chest — but from something a little more unorthodox. Federico Chiesa had to improvise, so he used his face.

A few minutes later, Andrea Belotti created Italy’s second goal while lying on the ground facing the wrong direction, with two Austrian defenders crowding over him and desperately trying to extract the ball from underneath his body. Belotti shuffled and writhed and scrabbled at the turf with his outstretched legs, protecting his possession until help arrived.

Neither effort was a case study in refinement. It is not possible, not really, to look elegant when being hit in the nose by a ball, or while squirming around on your back. The goals themselves might have been feats of skill — a fine volley from Chiesa, and then an emphatic finish from Matteo Pessina — but they had been created by more rudimentary virtues: tenacity, courage and unyielding cussedness.

Italy has won plenty of hearts and minds over the first two weeks of Euro 2020. Roberto Mancini’s team swatted aside Turkey in the tournament’s opening game in Rome, and then swept past Switzerland. With its place in the knockout rounds secure, Mancini sent out a shadow team for the final game, but it was still good enough to dispatch Wales while barely breaking a sweat.

It was not just the results, though. Mancini’s Italy played with verve and style and panache. It was young and vibrant and, most of all, fun, the feature the coach had told his players he prized above all others.

This Italy represented a clean break not only with its own past — all those grizzled defenses and stifling systems — but with the dogma that dominates international soccer, the one that decrees that to win, a team must, first and foremost, be dour and obdurate and controlled. Italy stood in opposition to all of that. It was bright, and open and just a little wild.

By those metrics, then, watching the same team toil to a 2-1 extra-time victory against a spirited, but limited, Austrian side should provide a stark reality check. It has been only a week or so since Austria was dismantled by the Netherlands, after all; it has not yet been two since it needed two late goals to see off the tournament’s biggest outsider, North Macedonia.

And yet, in the cavernous, echoing bowl of a three-quarters-empty Wembley Stadium, Austria first drew the Italians’ sting, then sapped their hopes and finally almost took their place in the quarterfinals. For much of the second half, Franco Foda’s Austria seemed to have Italy swaying and stumbling. Only a narrow, belated offside call denied Marko Arnautovic an opening goal.

At that stage, Italy did not have the air of a team that would recover from a setback. Lorenzo Insigne and Domenico Berardi, so electric in the group stage, had been ineffectual. Marco Verratti had been erratic in midfield.

The closest Mancini’s team had come was a thunderous effort from Ciro Immobile that cracked the post, and even that had been a speculative, roll-of-the-dice sort of shot, from a range best described as improbable. The flowing, adventurous approach that had marked Italy’s early engagements in this tournament was conspicuous by its absence, buried under the tension of the occasion.

That, of course, was always going to be the problem with Mancini’s approach. International tournaments are not really designed to be enjoyed. Once the one-and-done knockout phase arrives, they are high on jeopardy and low on fun. Players, after all, are only human. Caution sets in when there is so much at stake.

And it is in that which he and his players should take heart. A narrow escape against a largely unheralded opponent like Austria does not demonstrate that this Italy isn’t good enough to win the European Championship; conversely, it does illustrate that it possesses the characteristics necessary to do so.

Gradually, after Arnautovic’s goal was disallowed, Italy reasserted control. The introductions of Chiesa, Belotti and Pessina helped; that strength in depth will come in useful, too. By the time normal time drew to a close, Austria was camped in its half, on the edge of its penalty area, doing what it could to help the clock tick down.

After Chiesa and Pessina had scored, and after Italy had assumed that the contest was over and a place in the quarterfinals was secure, Sasa Kalajdzic pulled a goal back with a clever, darting, diving header that caught Gianluigi Donnarumma, Italy’s goalkeeper, by surprise. There were seven minutes left to play. At that point, Italian nerves might have shredded.

They did not. Instead, Italy shut the game down, with the sort of ruthless efficiency that some of their most illustrious predecessors would have instantly recognized. Austria did not come within striking distance of Donnarumma’s goal again. Indeed, with a little more composure in front of goal, Chiesa and Belotti might both have made the final score line a little more flattering.

Maturity, control, poise, doggedness: These may not be the qualities that capture the imagination in the free and easy days of the group stages, but they are the ones that come to the fore when everything hinges on one game, an hour and a half, when a winger who will control the ball with his face or a striker who will lie on the ground and scramble to find a pass is no less valuable than a picture-perfect through ball or a lightning counterattack.

There are, of course, tougher tests to come; Italy will face either Belgium or Portugal in its quarterfinal. Get through that and, most likely, the rather dubious reward will be France or Spain lying in wait in the final four. That Mancini’s team only just edged past Austria is not evidence either one will prove a step too far. Quite the reverse. Glamour will only carry you so far. To get to the end, grit is the key.

With Exasperation, College Football Is Just Trying to Get Through the Playoff

In this malleable, ebb-and-flow pandemic world, there may be one certainty gleaned from the last nearly two years of living with the coronavirus:...
Read more
Sports

Allen, Bills Are Near-Perfect in Dismantling the Patriots

The Patriots surprised many observers this season by clawing their way back to the playoffs behind rookie quarterback Mac Jones, who played on...
Read more