Kazakhstan Protests Lead President to Crack Down: ‘Fire Without Warning’ 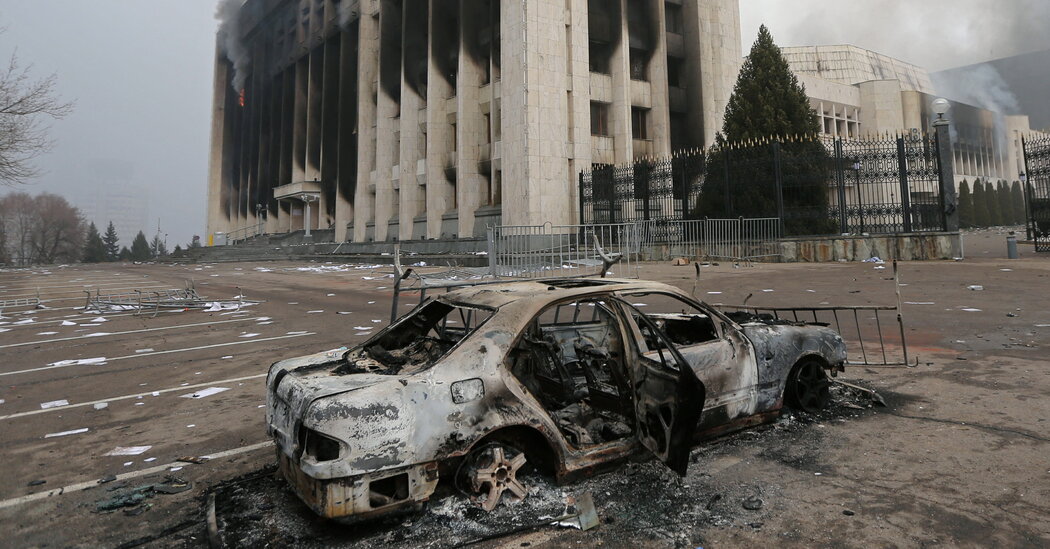 BISHKEK, Kyrgyzstan — The authoritarian leader of Kazakhstan said Friday that he had authorized the nation’s security forces to “fire without warning” as the government moved to bring an end to two days of chaos and violence after peaceful protests descended into scenes of anarchy.

“We hear calls from abroad for the parties to negotiate to find a peaceful solution to the problems,” President Kassym-Jomart Tokayev said in an address to the nation. “This is just nonsense.”

“What negotiations can there be with criminals and murderers,” he said. “They need to be destroyed and this will be done.”

The government said that order had been “mainly restored” across the country as Russian troops joined with the country’s security forces to quell widespread unrest.

“He responded to my appeal very promptly and, most importantly, warmly, in a friendly way,” he said.

Since the protests turned violent, it has been difficult to assess the events unfolding in Kazakhstan. Internet and telephone service have been sporadic, and there are few reliable independent news outlets in the country. People reached by phone have been largely confined to their homes, hunkering down as explosions rattle the walls.

He accused the groups of acting like they were above the law and believing they “can say whatever they want.”

And he accused the “supposedly free media outlets” in the country and outlets based abroad for fanning the flames of unrest.

The violence, Mr. Tokayev said, was organized from “a single command post,” with directions given to a group of some 20,000 “bandits.”

While offering no evidence to support his claim, Mr. Tokayev said the group had been actively trained and managed.

“Their acts showed the presence of a clear plan of attacks on military, administrative and social facilities in all areas, well-organized coordination of actions, high combat readiness and bestial cruelty,” he said.

Russian troops, operating alongside Kazakh law enforcement agencies, said on Friday they had regained full control of the airport in Almaty, the country’s largest city, according to the Russian Defense Ministry.

“The security of the Consulate General of the Russian Federation located in the city and other important facilities is being ensured,” a spokesman for the ministry, Igor Konashenkov, said in televised remarks.

The ferocity of the unrest caught many observers by surprise. The oil-rich Central Asian nation perched on Russia’s southern steppe had been widely viewed as perhaps the most stable country in a volatile region.

For most of the time since it gained independence three decades ago, Kazakhstan was ruled by one man: Nursultan Nazarbayev. Even after he formally stepped down as president, he retained the title “leader of the nation” and was widely viewed as keeping control over the state through his role as chairman of the national security council.

Amid the unrest, Mr. Tokayev publicly assumed control of the security forces and sidelined Mr. Nazarbayev, 81. Mr. Tokayev also reached out to Moscow for help as the protests spiraled out of control.

The Russia-led effort to quell the unrest, described as a temporary peacekeeping mission by a military alliance that is Russia’s equivalent of NATO, will be limited in time and will aim at protecting government buildings and military facilities, Kazakh officials said.

The alliance, called the Collective Security Treaty Organization, has dispatched about 2,500 troops to Kazakhstan, and that figure could rise, according to the Russian state news agency RIA Novosti.

This is the first time in the history of the alliance that its protection clause has been invoked.

Even as Russian paratroopers from the elite 45th Guards Spetsnaz Brigade landed in Almaty, gunbattles raged in the streets late into the night, according to video from a BBC correspondent on the scene.

The Biden administration said it was closely watching Moscow’s military intervention in Kazakhstan, a former Soviet republic that Washington has cultivated as a friendly partner.

That bond has formed in large part because of the major energy investments by American corporations and the cooperation of the former Kazakh president, Mr. Nazarbayev, with the United States on nuclear nonproliferation. Mr. Nazarbayev also supported the American military interventions in Iraq and Afghanistan.

Understand the Protests in Kazakhstan

What led to the protests? The protests began when the government lifted price caps for liquefied petroleum gas, a low-carbon fuel that many Kazakhs use to power their cars. But the frustration among the people runs deep in regards to social and economic disparities.

What do the protesters want? The demands of the demonstrators have expanded in scope from lower fuel prices to a broader political liberalization by seeking to oust the autocratic forces that have ruled Kazakhstan without any substantial opposition since 1991.

Why does the unrest matter outside this region? Until now, the oil-rich country has been regarded as a pillar of political and economic stability in an unstable region. The protests are also significant for Vladimir Putin, who views Kazakhstan as part of Russia’s sphere of influence.

How has the government responded? President Kassym-Jomart Tokayev has called the protesters “a band of terrorists,” declared Kazakhstan under attack and asked the Russian-led military alliance to intervene. Officials have instituted a state of emergency and shut off internet access.

American officials see Mr. Putin’s response to the crisis as a test of his ability and determination to maintain a Russian sphere of influence in neighboring countries.

“The United States and, frankly, the world will be watching for any violations of human rights,” said Ned Price, a State Department spokesman. “We will also be watching for any actions that may lay the predicate for the seizure of Kazakh institutions.”

“You decisively took effective measures at critical moments to quickly calm the situation, which embodies your responsibility as a politician,” China’s authoritarian leader, Xi Jinping, said in a message to Mr. Tokayev, according to China’s official Xinhua News Agency.

Kazakhstan has been expanding its ties with China in recent years. The country plays a central role in Mr. Xi’s signature infrastructure program, known as “One Belt, One Road,” which aims to revive the ancient Silk Road and build up other trading routes between Asia and Europe to pump Chinese products into foreign markets.

In his message, Mr. Xi condemned any efforts to undermine Kazakhstan’s stability and peace, as well as its relationship with China. He told Mr. Tokayev that Beijing “resolutely opposes external forces deliberately creating turmoil and instigating a ‘color revolution’ in Kazakhstan,” the news agency said.

The Xinhua report did not elaborate on what Mr. Xi was referring to, but the Chinese Communist Party has often invoked the theme of foreign meddling to explain unrest, including in Hong Kong.

The protests in Kazakhstan started on Sunday with what appeared to be a genuine outpouring of public anger over an increase in fuel prices and a broader frustration over a government widely viewed as corrupt — with vast oil riches benefiting an elite few at the expense of the masses.

In a concession, the government on Thursday announced a price cap on vehicle fuel and a halt to increases in utility bills.

However, as the protests swelled, both the government and even some supporters of the protests said they had been co-opted by criminal gangs looking to exploit the situation.

Over the past two days, oil prices have risen 4 percent, partly driven by worries over Kazakhstan, a major petroleum producer. Futures in Brent crude, the international benchmark, were trading at $82.95 a barrel on Friday, close to seven-year highs that were reached in October.

Chevron, the second largest U.S. oil company, said there has been some disruption to oil production at their key Tengiz field in Kazakhstan. The issue appears to be difficulty in loading some petroleum products from the field onto rail cars.

The market is also responding to geopolitical tensions, including over Ukraine, and to production problems in Nigeria, Angola, Libya and elsewhere.

The huge destruction of public property in Kazakhstan — including the torching of Almaty’s City Hall and the burning and looting of scores of other government buildings — has been met with a strong show of force by security personnel.

The Interior Ministry said in a statement on Friday that 26 “armed criminals” had been “liquidated” and 18 security officers killed in the unrest.