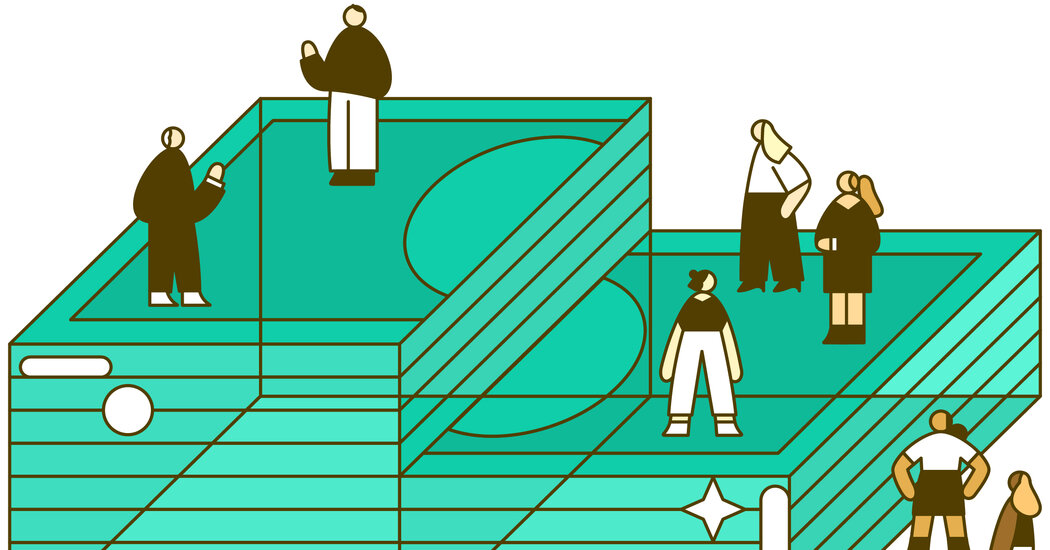 That information, taken in before I exchange pleasantries with these women, feels almost illicit — like the confessions of a stranger oversharing at a bar.

We’ve never spoken before, and there is a certain intimacy that comes from picking up the phone to call someone knowing nothing but her name and her salary. And there is also, some companies bet, a certain kind of power.

Ms. Kopprasch, Ms. Thomas and Ms. Peters all work at Buffer, a fully remote social media company — “Slack is our HQ,” employees joke — that made the unusual decision, eight years ago, to disclose every employee’s salary online. The goal was to close the firm’s gender pay gap, which hovered around 4 percent in the early years of the initiative.

It didn’t entirely work, the company discovered. It turns out that the gap between men’s and women’s earnings is a numbers problem; making those numbers public doesn’t make them even.

America’s overall raw wage gap was 17.7 percent in 2020, though it’s far bigger for Black and Hispanic women. The gap is usually attributed to the fact that women work two-thirds of the country’s low-paying jobs and that the fields dominated by men tend to offer higher wages.

But even when women and men work the exact same jobs, men earn more. That’s partly because women are less likely to negotiate for higher pay and more apt to be penalized when they do.

“Instead of being seen as shrewd, a woman negotiating is seen as complaining,” said C. Nicole Mason, president of the Institute for Women’s Policy Research. “Literally just for articulating what she says she deserves for her skills.”

In recent decades, some experts have argued that there’s an obvious means of closing the pay gap: making salaries public. When women know how much their male counterparts earn, they’re in a better place to demand the same compensation. And companies might feel pressure to equalize pay, or better explain to workers how salaries are determined.

The push for these kinds of measures took on new urgency during the pandemic, as more than two million American women left the work force. Research has shown that women who take a year away from work can have earnings 39 percent lower than their counterparts who don’t.

In 2006, Denmark introduced legislation requiring companies with more than 35 employees to report on their gender wage gaps. A study examining the short-term effects of that law found that it succeeded in reducing the gap by 7 percent. In the United States, a handful of states — including California and New York — have passed laws prohibiting companies from penalizing their workers for talking about pay.

Joel Gascoigne, the chief executive of Buffer, took that idea further in 2013. He not only released every employee’s salary but also started using a formula to set pay, based entirely on the person’s role and hometown cost of living. He wasn’t sure how his employees would react when he announced the idea, tepidly, at an all-staff meeting. But right away it was embraced by the team, which is now nearly 100 people.

For Ms. Kopprasch, Buffer’s chief of special projects, the news that her salary would be algorithmically determined hit with a wave of relief. She entered the work force in 2008, when she graduated from college into an economic crisis. It hadn’t occurred to her to ask her new boss for more than the $35,000 she was offered; she was happy to have any job at all.

“I thought there was a risk that if I asked for too much I’d be considered greedy and ungrateful, and he’d say, ‘Never mind, we don’t want to hire you at all,’” Ms. Kopprasch recalled.

At her next job, at an email marketing company in Nashville, she learned over drinks one night that a male co-worker at her level was making significantly more than her $40,000 salary. The disparity felt like a betrayal to Ms. Kopprasch — but how, she wondered, could she have known? It hadn’t ever seemed appropriate, or necessary, to ask her colleagues how much they were making.

That wouldn’t be the case at Buffer. Not to mention that Buffer’s pay was significantly more generous, at a starting salary of $70,000. “I can afford strawberries!” Ms. Kopprasch remembered thinking when she started at the company in 2012.

She wasn’t the only employee to cheer the company’s shift. Some were gratified to see that the hiring process no longer involved the awkward song and dance of negotiating people’s pay. Salary was determined simply by the job description and location of the new employee.

“It was this incredible sense of relief,” said Ms. Thomas, who joined Buffer as its chief product officer in 2020, having worked at Microsoft and Intuit. “I would rather have a root canal done than fight for a salary.”

When the initiative began, some Buffer employees wondered whether making the salary information public would hurt recruiting, because competitors could offer slightly higher pay to top talent. The opposite turned out to be true: Buffer’s job applications rose from 1,263 in the 30 days before the announcement to 2,886 in the next month.

But while the talent pool expanded and morale was boosted, Buffer’s gender wage gap continued to grow. In 2015, it was around 4 percent; by 2018 it was inching above 9 percent, and by 2019 it hit 15 percent.

At Buffer, salaries are still determined primarily by people’s roles, and many of the top leaders, including the chief executive, were men. The well-compensated engineering team was also predominantly male. Mr. Gascoigne told his staff that he realized that transparency alone wouldn’t close the gap as he had hoped.

Other institutions have experimented with pay transparency to mixed results. When the University of California made salaries public, research showed that people who compared themselves with others and felt they were being underpaid demonstrated less job satisfaction and more turnover.

Given the limits of how effective pay transparency can be, some experts say it isn’t worth the effort, which can often be awkward. It can also have unintended side effects.

“It tends to flatten pay and de-link it from performance,” said Todd Zenger, professor of strategy and strategic leadership at the University of Utah School of Business. “If your organization isn’t going to pay for performance, it may cause people to go leave and find organizations that do.”

It can also create a culture where people are constantly comparing themselves with one another, Mr. Zenger added. This is all the more complicated because research has shown that people tend to inflate their own sense of accomplishments and contributions to an organization.

Some organizations may squirm away from total transparency not because they’re trying to cover up inequities, Mr. Zenger argued, but rather to preserve a healthier mind-set. “They’re trying to create a culture where they can still reward performance and recognize people have exaggerated understandings of their own individual performance,” he said.

At Buffer, though, some employees said the pay transparency had made them feel more committed to the company. “We know it’s not your typical company trying to squeeze every last dollar out of you,” Ms. Kopprasch said.

Buffer’s initiative has also signaled its commitment to the kinds of values that more companies have been espousing in the last year, as workers across industries push for a deeper focus on diversity and inclusion.

The company specified in job applications that people need not have every qualification to apply. (Men are more likely than women to apply to jobs for which they don’t have relevant experience.) They also worked with women-in-engineering groups to diversify the engineering applicant pool. Buffer’s March report, the most recent available, showed its pay gap was down to roughly 5 percent, 10 points lower than in 2019.

And for some employees, the benefits of the pay transparency have spilled into the ways they talk about money in their personal lives.

Ms. Peters, a customer advocacy manager, recalled that money was a hush-hush subject when she was growing up. When she learned that her mother made $90,000 annually, she thought she was hearing “privileged information.”

Decades later, Ms. Peters has made it clear to her own children that they can talk openly about money. She tells them her salary and teaches them how to budget.

“My daughter came up on me one time while I was using my budgeting app, and I had this feeling like I should cover it up,” she said. “I caught myself, and I was like, ‘That’s weird it’s ingrained in me.’ But the last five years have taught me it’s OK to talk about money.”

Facebook
Twitter
Pinterest
WhatsApp
Previous articleJuventus have ‘no signal from Ronaldo’ that he wants to leave & expect Portuguese to honour contract
Next articleAs China’s Communist Party Turns 100, Xi Warns It Will Not Be Bullied