Learning Apps Have Boomed During the Pandemic. Now Comes the Real Test 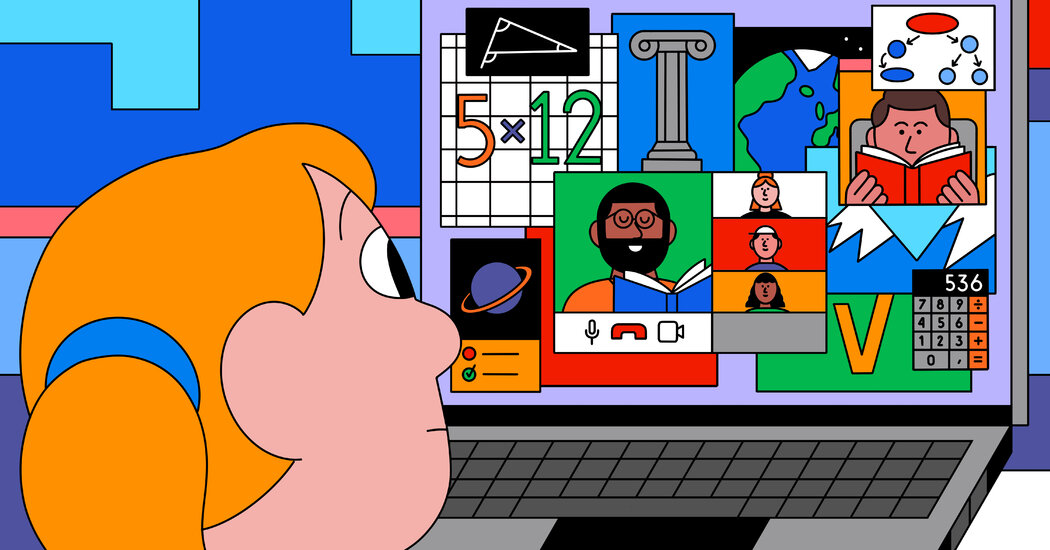 After a tough year of toggling between remote and in-person schooling, many students, teachers and their families feel burned out from pandemic learning. But companies that market digital learning tools to schools are enjoying a coronavirus windfall.

Venture and equity financing for education technology start-ups has more than doubled, surging to $12.58 billion worldwide last year from $4.81 billion in 2019, according to a report from CB Insights, a firm that tracks start-ups and venture capital.

During the same period, the number of laptops and tablets shipped to primary and secondary schools in the United States nearly doubled to 26.7 million, from 14 million, according to data from Futuresource Consulting, a market research company in Britain.

“We’ve seen a real explosion in demand,” said Michael Boreham, a senior market analyst at Futuresource. “It’s been a massive, massive sea change out of necessity.”

But as more districts reopen for in-person instruction, the billions of dollars that schools and venture capitalists have sunk into education technology are about to get tested. Some remote learning services, like videoconferencing, may see their student audiences plummet.

“There’s definitely going to be a shakeout over the next year,” said Matthew Gross, the chief executive of Newsela, a popular reading lesson app for schools. “I’ve been calling it ‘The Great Ed Tech Crunch.’”

Yet even if the ed-tech market contracts, industry executives say there is no turning back. The pandemic has accelerated the spread of laptops and learning apps in schools, they say, normalizing digital education tools for millions of teachers, students and their families.

“This has sped the adoption of technology in education by easily five to 10 years,” said Michael Chasen, a veteran ed-tech entrepreneur who in 1997 co-founded Blackboard, now one of the largest learning management systems for schools and colleges. “You can’t train hundreds of thousands of teachers and millions of students in online education and not expect there to be profound effects.”

Tech evangelists have long predicted that computers would transform education. The future of learning, many promised, involved apps powered by artificial intelligence that would adjust lessons to children’s abilities faster and more precisely than their human teachers ever could.

That robotic teaching revolution has been slow in coming, in part because very few learning apps have shown they significantly improve students’ outcomes.

Instead, during the pandemic, many schools simply turned to digital tools like videoconferencing to transfer traditional practices and schedules online. Critics say that push to replicate the school day for remote students has only exacerbated disparities for many children facing pandemic challenges at home.

“We will never again in our lifetime see a more powerful demonstration of the conservatism of educational systems,” said Justin Reich, an assistant professor at the Massachusetts Institute of Technology who studies online learning and recently wrote the book “Failure to Disrupt: Why Technology Alone Can’t Transform Education.”

Apps that enable online interactions between teachers and students are reporting extraordinary growth, and investors have followed.

Among the biggest deals, CB Insights said: Zuoyebang, a Chinese ed-tech giant that offers live online lessons and homework help for students in kindergarten through 12th grade, raised a total of $2.35 billion last year from investors including Alibaba and Sequoia Capital China.

Yuanfudao, another Chinese tutoring start-up, raised a total of $3.5 billion from investors like Tencent. And Kahoot, a quiz app from Norway used by millions of teachers, recently raised about $215 million from SoftBank.

In the United States, some of the largest recent ed-tech deals involved start-ups that help educators give and grade assignments, lead lessons or hold class discussions online. Among them are Newsela and Nearpod, an app that many teachers use to create live interactive video lessons or take students on virtual field trips.

“Especially in K-12, so much of learning is sparked through dialogue between teachers and students,” said Jennifer Carolan, a partner at Reach Capital, a venture capital firm focused on education that has invested in Nearpod and Newsela. “We are excited about these products that are really extending the capabilities of the classroom teachers.”

A number of ed-tech start-ups reporting record growth had sizable school audiences before the pandemic. Then last spring, as school districts switched to remote learning, many education apps hit on a common pandemic growth strategy: They temporarily made their premium services free to teachers for the rest of the school year.

“What unfolded from there was massive adoption,” said Tory Patterson, a managing director at Owl Ventures, a venture capital firm that invests in education start-ups like Newsela. Once the school year ended, he said, ed-tech start-ups began trying to convert school districts into paying customers, and “we saw pretty broad-based uptake of those offers.”

By the end of December, schools were paying for 11 million student accounts on Newsela, an increase of about 87 percent from 2019. Last month, the start-up announced that it had raised $100 million. Now Newsela is valued at $1 billion, a milestone that may be common among consumer apps like Instacart and Deliveroo but is still relatively rare for education apps aimed at American public schools.

Nearpod also reported exponential growth. After making the video lesson app free, the start-up saw its user base surge to 1.2 million teachers at the end of last year — a fivefold jump over 2019. Last month, Nearpod announced that it had agreed to be acquired by Renaissance, a company that sells academic assessment software to schools, for $650 million.

The latest on how the pandemic is reshaping education.

Some consumer tech giants that provided free services to schools also reaped benefits, gaining audience share and getting millions of students accustomed to using their product.

For instance, the worldwide audience for Google Classroom, Google’s free class assignment and grading app, has skyrocketed to more than 150 million students and educators, up from 40 million early last year. And Zoom Video Communications says it has provided free services during the pandemic to more than 125,000 schools in 25 countries.

But whether tools that teachers have come to rely on for remote learning can maintain their popularity will hinge on how useful the apps are in the classroom.

Newsela, for one, has gained a devoted following among educators for its flexibility. The app lets them choose topical news articles or short stories for class discussion, with different versions of the text depending on a student’s reading level. Mr. Gross, Newsela’s chief executive, said the app also provided quick feedback to teachers on each child’s progress, alerting them to students who might need attention whether they are online or in the classroom.

“Teachers are starting to realize which tools are really built for both a physical and a remote classroom,” Mr. Gross said, “that work equally well in both settings.”

Nearpod, the video lesson app, also expects to maintain traction in schools, said Pep Carrera, the start-up’s chief executive. During the pandemic, educators like Nesi Harold, an eighth-grade science teacher in the Houston area, have used features on the app to poll students, create quizzes or ask students to use a drawing tool to sketch the solar system — digital tools that work for both live classroom and remote instruction.

“It allows me to broadcast the lesson to all of my learners, no matter where they are,” said Ms. Harold, who simultaneously teaches in-person and remote students.

Her one complaint: She can’t store more than a few lessons at a time on Nearpod because her school hasn’t bought a license. “It’s still pricey,” she said.

The future in education is less clear for enterprise services, like Zoom, that were designed for business use and adopted by schools out of pandemic necessity.

In an email, Kelly Steckelberg, Zoom’s chief financial officer, said she expected educational institutions would invest in “new ways to virtually communicate” beyond remote teaching — such as using Zoom for Parent Teacher Association meetings, school board meetings and parent-teacher conferences.

Mr. Chasen, the ed-tech entrepreneur, is counting on it. He recently founded Class Technologies, a start-up that offers online course management tools — like attendance-taking and grading features — for educators and corporate trainers holding live classes on Zoom. The company has raised $46 million from investors including Bill Tai, one of the earliest backers of Zoom.

“I’m not coming up with some new advanced A.I. methodology,” Mr. Chasen said of his new app for video classrooms. “You know what teachers needed? They needed the ability to hand out work in class, give a quiz and grade it.”