Lithuania vs. China: A Baltic Minnow Defies a Rising Superpower 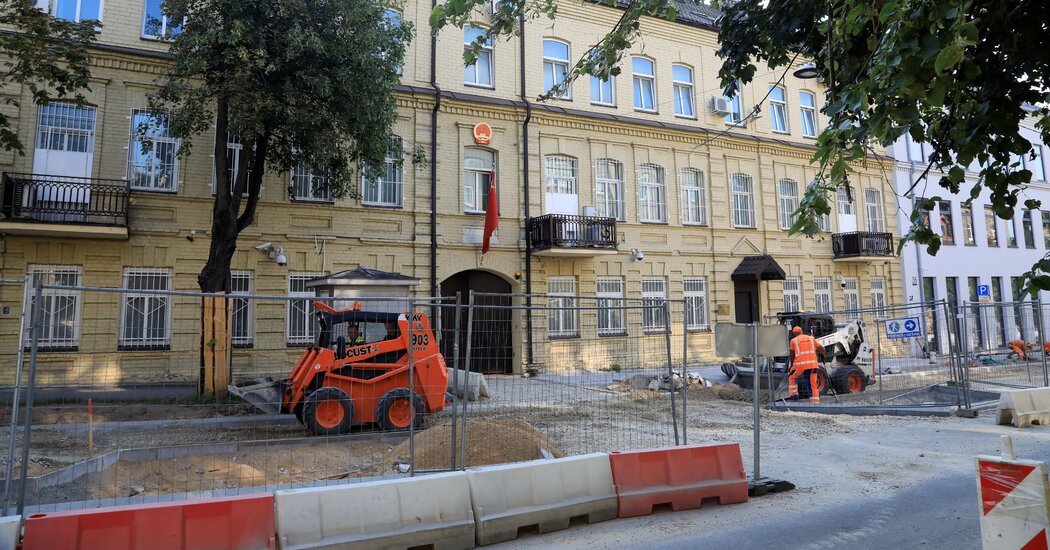 VILNIUS, Lithuania — It was never a secret that China tightly controls what its people can read and write on their cellphones. But it came as a shock to officials in Lithuania when they discovered that a popular Chinese-made handset sold in the Baltic nation had a hidden though dormant feature: a censorship registry of 449 terms banned by the Chinese Communist Party.

Lithuania’s government swiftly advised officials using the phones to dump them, enraging China — and not for the first time. Lithuania has also embraced Taiwan, a vibrant democracy that Beijing regards as a renegade province, and pulled out of a Chinese-led regional forum that it scorned as divisive for the European Union.

Furious, Beijing has recalled its ambassador, halted trips by a Chinese cargo train into the country and made it nearly impossible for many Lithuanian exporters to sell their goods in China. Chinese state media has assailed Lithuania, mocked its diminutive size and accused it of being the “anti-China vanguard” in Europe.

In the battlefield of geopolitics, Lithuania versus China is hardly a fair fight — a tiny Baltic nation with fewer than 3 million people against a rising superpower with 1.4 billion. Lithuania’s military has no tanks or fighter jets, and its economy is 270 times smaller than China’s.

But, surprisingly, Lithuania has proved that even tiny countries can create headaches for a superpower, especially one like China whose diplomats seem determined to make other nations toe their line. Indeed, Lithuania, which does little trade with China, has caused enough of a stink that its fellow members in the European Union are expected to discuss the situation at a meeting next week. Nothing could be worse for Beijing than if other countries followed Lithuania’s example.

For Lithuania, the threats and tantrums from Beijing haven’t weakened the government’s resolve, in part because China has little leverage over it. In an interview, Gabrielius Landsbergis, the foreign minister, said the country had a “values-based foreign policy” of “supporting people supporting democratic movements.”

Other European countries declaring fealty to democratic values have rarely acted on them in their relations with China. Mr. Landsbergis’s party, however, has made action part of its appeal to domestic voters: Its pre-election manifesto last year included a promise to “maintain the value backbone” in foreign policy “with countries such as China.”

Lithuania’s small size, the foreign minister lamented, “made us an easy target” for China because “their calculation is that it is good to pick enemies way, way, way below your size, draw them into the fighting ring and then beat them to pulp.”

Eager to avoid getting pummeled, Mr. Landsbergis visited Washington this month and met with Secretary of State Antony Blinken, who pledged “ironclad U.S. support for Lithuania in the face of attempted coercion from the People’s Republic of China.”

Despite its puny size, Lithuania looms surprisingly large in Chinese calculations, said Wu Qiang, a political analyst in Beijing, partly because of its role as a transit corridor for trains carrying goods from China to Europe.

It also commands Chinese attention because of its oversize role in the collapse of the Soviet Union, a drama that China has studied in hope of heading off similar centrifugal forces at home. In 1990, Lithuania was the first Soviet republic to declare its independence from Moscow — a cause led by the foreign minister’s grandfather, Vytautas Landsbergis.

“China regards Lithuania as a museum to save itself from a Soviet-like collapse,” Mr. Wu said

The rift between the two countries flows from many sources, including a drive by Taiwan to rally political support, as well as Lithuanian elections last year that brought to power a new coalition government dominated by Mr. Landsbergis’ pro-American conservative party and liberals vociferous about defending human rights.

But it also reflects a wider backlash against China’s aggressive “wolf warrior” diplomacy across Europe and disenchantment with soaring Chinese exports that left imports from Europe trailing far behind.

In recent years, China has created resentment through hectoring behavior that reminds many in Lithuania of past bullying by Moscow. In 2019 Chinese diplomats organized a belligerent protest to counter a rally by Lithuanian citizens in support of Hong Kong’s democracy movement. The Chinese intervention led to scuffles in Cathedral Square of Vilnius, the capital.

“This approach does not win China any friends,” said Gintaras Steponavicius, a former legislator who helped set up a lobbying group, the Taiwan Forum. “We are not used to being told how to behave, even by a superpower.”

Tired of being pressured by Beijing, prominent politicians joined a Taiwan friendship group in Parliament and attended a Taiwan national day celebration in Vilnius last October.

Some have doubts about the idea. Linas Linkevicius, a former foreign minister, notes that Lithuania already has daggers drawn with Russia and neighboring Belarus, whose exiled opposition leader, Svetlana Tikhanovskaya, operates from Vilnius.

“We are exposed on too many fronts,” he said.

Opinion surveys by the European Council on Foreign Relations indicate that most Europeans don’t want a new Cold War between the United States and China. But they also show growing wariness of China.

“There is a general shift in mood,” said Frank Juris, a researcher at the Estonian Foreign Policy Institute who tracks Chinese activities in Europe. “Promises have not materialized and countries are tired of being constantly threatened with the whip.”

That whip is now being brought down hard on Lithuania, a member of the European Union and also NATO.

Particularly galling for Beijing was Lithuania’s announcement in July that it had accepted a request by Taiwan to open a “Taiwanese representative office” in Vilnius.

China’s foreign ministry accused Lithuania of crossing a “red line,” and urged it “to immediately rectify its wrong decision,” and “not to move further down the wrong path.”

Many countries, including Germany and neighboring Latvia, have similar Taiwanese offices but, to avoid angering Beijing, they officially represent Taipei, Taiwan’s capital, not Taiwan itself.

And in May, Lithuania withdrew from a diplomatic forum grouping China and 17 countries in East and Central Europe that promotes Mr. Xi’s Belt and Road initiative, a multi-billion-dollar infrastructure program.

From China’s perspective, last week’s release of a report on the Chinese-made cellphones by Lithuania’s Defense Ministry Cyber Security Center was yet another provocation. The hidden registry found by the center allows for the detection and censorship of phrases like “student movement,” “Taiwan independence,” and “dictatorship.”

The blacklist, which updates automatically to reflect the Communist Party’s evolving concerns, lies dormant in phones exported to Europe but, according to the cyber center, the disabled censorship tool can be activated with the flick of a switch in China.

The maker of the Chinese phones in question, Xiaomi, says its devices “do not censor communications.”

In addition to telling government offices to dump the phones, Mr. Abukevicius said in an interview that ordinary users should decide “their own appetite for risk.”

The Global Times, a nationalist news outlet controlled by the Chinese Communist Party, derided the Lithuanian report as a “new trick” by a small “pawn” in Washington’s anti-China agenda.

China has steadily ramped up pressure on Lithuania, last month recalling its ambassador from Vilnius and urging Lithuania’s envoy in Beijing to go home, which she did. It halted a regular cargo train to Lithuania, though it still lets other trains transit through the Baltic country filled with Chinese goods destined for Germany.

While not announcing any formal sanctions, China has added red tape to block Lithuanian exporters from selling goods in China.

Lithuania’s economy minister, Ausrine Armonaite, downplayed the damage, noting Lithuania’s exports to China accounted for only 1 percent of total exports. Losing that, she said, “is not too harmful.”

A bigger blow, according to business leaders, has been the disruption in the supply of Chinese-made glass, electronic components and other items needed by Lithuanian manufacturers. Around a dozen companies that rely on goods from China last week received nearly identical letters from Chinese suppliers claiming that power cuts had made it difficult fulfill orders.

“They are very creative,” said Vidmantas Janulevicius, the president of the Lithuanian Confederation of Industrialists, noting that the delays were “targeted very precisely.”

Lithuania has made “a clear geopolitical decision” to side decisively with the United States, a longtime ally, and other democracies, said Laurynas Kasciunas, the chairman of the national security and defense committee. “Everyone here agrees on this. We are all very anti-communist Chinese. It is in our DNA.”