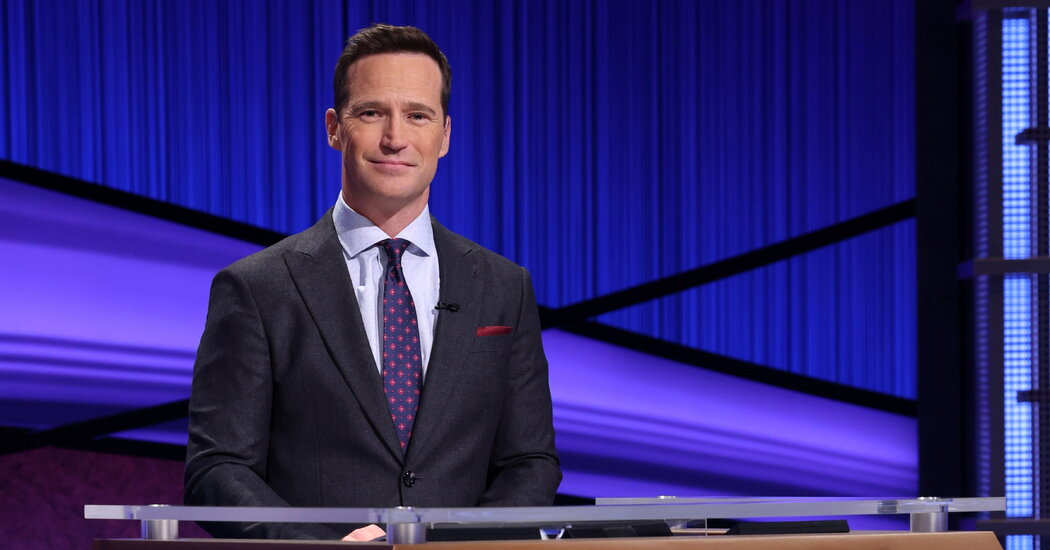 Mike Richards, who was named the new host of “Jeopardy!” last week, is abruptly leaving the role at the beloved game show after a recent report resurfaced offensive and sexist comments he made on a podcast several years ago.

Mr. Richards, who as the show’s executive producer helped oversee the search for Alex Trebek’s replacement — before he was named to the position, a decision that itself proved controversial — said on Friday in a staff memo that the controversy had made “clear that moving forward as host would be too much of a distraction for our fans and not the right move for the show.”

“As such, I will be stepping down as host effective immediately,” Mr. Richards wrote.

Sony Pictures Entertainment, which produces and distributes the game show, said that Mr. Richards would stay on as the program’s executive producer.

“We support Mike’s decision to step down as host,” Sony said in a statement. “We were surprised this week to learn of Mike’s 2013/2014 podcast and the offensive language he used in the past. We have spoken with him about our concerns and our expectations moving forward.”

Sony added: “Mike has been with us for the last two years and has led the ‘Jeopardy!’ team through the most challenging time the show has ever experienced. It is our hope that as executive producer he will continue to do so with professionalism and respect.”

The show’s search for a permanent replacement host will now start again, with a series of guest hosts to be scheduled. Mayim Bialik, the sitcom star, will remain as host of “Jeopardy!” prime-time specials.

But a report in The Ringer this week unearthed past comments made by Mr. Richards on a podcast that led to denunciations from critics including the Anti-Defamation League. In a 2013 episode, Mr. Richards joked about women who “dress like a hooker” on Halloween; in another episode, he called his female co-host a “booth slut” because she once worked as a model at the Consumer Electronics Show in Las Vegas. He also described women who wear one-piece swimsuits as looking “really frumpy and overweight” and referred to stereotypes about Jews and large noses.

Mr. Richards, a stand-up comedian turned game show impresario, was serving as executive producer of “The Price Is Right” at the time that he made the comments.

His first official taping as permanent host of “Jeopardy!” took place on Thursday at the show’s studios in Culver City, Calif. It quickly became clear that the show’s staff was deeply upset about his podcast comments and the furor surrounding his appointment.

In an emotional morning meeting with Mr. Richards, crew members aired their grievances and disappointment over his past behavior, which they worried would hurt the reputation of the show, according to two people familiar with the meeting who spoke on condition of anonymity because the internal “Jeopardy!” discussions were sensitive.

And a fresh incident on Thursday involving Mr. Richards further roiled some of the show’s staff.

A group of “Jeopardy!” loyalists had gathered for a ceremony to rename the show’s studio after Mr. Trebek, including Mr. Trebek’s widow, his children and Anthony Vinciquerra, Sony Pictures Entertainment’s chief executive. Mr. Richards and Ms. Bialik were there, along with two of the other contenders for the hosting job, the former contestants Buzzy Cohen and Ken Jennings, according to three people familiar with the incident, who spoke on condition of anonymity.

Afterward, the people said, Mr. Cohen and Mr. Jennings had expected to attend Mr. Richards’s debut taping. Instead, they were escorted from the sound stage to a nearby green room, where they watched the taping over a closed feed. They were told that Mr. Richards was too nervous to have them in the studio, the people said.

One of the people likened it to inviting Joe DiMaggio back to Yankee Stadium and then not letting him in the dugout.

Sony said that access to the taping was restricted because of pandemic protocols limiting the number of people in the studio. Mr. Vinciquerra did not attend the taping, either.

The search to replace Mr. Trebek, who died of pancreatic cancer last year, had riveted fans of the show, a television institution whose first iteration dates to 1964.

The show arranged a parade of guest hosts, including LeVar Burton, Anderson Cooper, Aaron Rodgers, Joe Buck and others. One contender was virtually unknown to the audience: Mr. Richards, who started as executive producer of “Jeopardy!” and “Wheel of Fortune” last year.

Initially, Mr. Richards spoke dispassionately about the search, telling The New York Times in January that he wanted the show’s audience to have a chance to weigh in on the selection and that the new host should not be merely doing an “impression of Alex.”

He did not mention that he might also be in the running.

Sony has said that Mr. Richards moved aside from the selection process after he emerged as a candidate. But as executive producer, he retained a key role in determining which tapes of prospective hosts would be screened for the focus groups that Sony was studying closely. Other supervising “Jeopardy!” producers were excluded from that process.

Mr. Richards also faced scrutiny when lawsuits resurfaced from his old job at “The Price Is Right,” including allegations that he had balked when one of the show’s on-air models, Brandi Cochran, announced that she was pregnant with twins. According to the lawsuit, Mr. Richards put his face in his hands and told her, “Twins? Are you serious?” The case was eventually settled. The suit also claimed that Mr. Richards wanted the models to wear skimpier clothing; Mr. Richards said in a statement this month that the allegations do “not reflect the reality of who I am.”

In his memo on Friday, Mr. Richards wrote, “It pains me that these past incidents and comments have cast such a shadow on ‘Jeopardy!’ as we look to start a new chapter.”

He concluded: “I know I have a lot of work to do to regain your trust and confidence.”

Facebook
Twitter
Pinterest
WhatsApp
Previous articleYankees’ Andrew Velazquez Is Living Something Wilder Than His Dreams
Next article‘Our Goal Is to Keep the Regime on Its Toes’: Inside Belarus’s Underground Opposition