Military Crackdown in Myanmar Escalates With Killing of Protesters 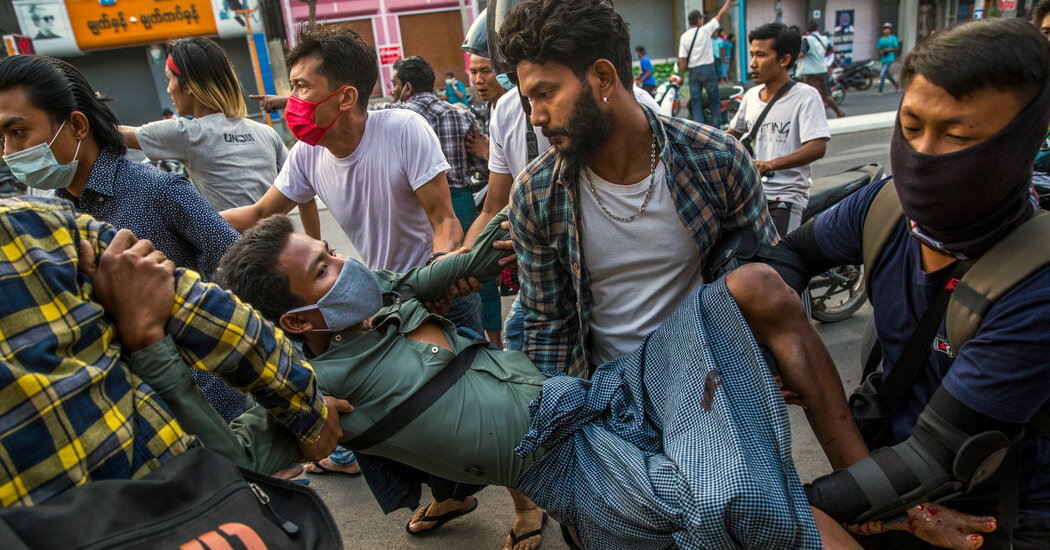 At least 18 people were killed during protests, according to the United Nations, with security forces opening fire on crowds.

Military forces in Myanmar opened fire on crowds of peaceful demonstrators in several cities on Sunday, killing at least 18 people, the United Nations said, in a violent escalation of the junta’s efforts to suppress weeks of mass protests against its month-old coup.

Videos and photographs captured images of bodies in the street and people running from the police as tear gas and smoke filled the air. The sheer ferocity of Sunday’s crackdown — soldiers appeared to shoot at unarmed people at random and rounded up groups of demonstrators before marches could begin — drew sharp rebukes internationally.

The forceful response of the military signaled a new ruthless resolve to quash unrest after a month in which thousands have turned out regularly to protest the Feb. 1 coup. The demonstrations and civil disobedience movement have challenged the primacy of a military notorious for its brutality after having crushed democracy movements in 1988 and 2007 by shooting protesters.

“We strongly condemn the escalating violence against protests in Myanmar and call on the military to immediately halt the use of force against peaceful protesters,” said Ravina Shamdasani, a spokeswoman with the U.N. human rights office. Secretary of State Antony Blinken denounced what he called “abhorrent violence” by the military.

In the southern city of Dawei, the police opened fire on a crowd of hundreds, witnesses told The New York Times. At least three people were killed and more than 50 wounded, said Dr. Tun Min, who was treating the injured at a hospital. A second doctor, who asked not to be named for fear of retaliation, confirmed those numbers.

Doctors in Mandalay confirmed three fatal shootings there, and killings also took place in Yangon and the city of Mawlamyine, The New York Times was able to confirm. The United Nations statement said it had reports of deaths “as a result of live ammunition fired into crowds” in Yangon, Mandalay and Dawei, as well as in the cities of Myeik, Bago and Pokokku.

It was the largest single-day toll since the coup, which ousted the civilian government led by Daw Aung San Suu Kyi, Myanmar’s most popular politician. Before Sunday, just three deaths at the hands of the security forces had been widely reported, though two other deaths recently came to light in interviews with bereaved family members.

The Tatmadaw, as Myanmar’s military is known, has led the country for most of the past 60 years. But over the past decade it yielded some power to civilian leaders, before seizing control again in the coup.

Until Sunday, the junta led by Senior Gen. Min Aung Hlaing had been comparatively restrained in its response to the protests and organized civil disobedience that have swept the nation. But as the demonstrations, marches and work stoppages have continued, fear of another bloody, full-scale crackdown has been ever-present.

After the killings began on Sunday, Human Rights Watch called on the generals to halt the use of lethal ammunition against protesters and said any deaths and injuries should be the subject of an impartial investigation.

“The Myanmar security forces’ clear escalation in use of lethal force in multiple towns and cities across the country in response to mostly peaceful anti-coup protesters is outrageous and unacceptable, and must be immediately halted,” said Phil Robertson, the group’s deputy Asia director.

In Mandalay, Myanmar’s second largest city, one protester, U Maung Maung Oo, died after being shot in the head through his motorcycle helmet as he was fleeing police officers and soldiers. Two others were shot and wounded.

U Si Thu, a doctor and a protester, said he and the three victims were among a group of about 50 who were trying to escape the police and soldiers, who broke up their planned protest before it could start.

“I don’t know where the bullet came from, but the man was shot in the forehead and went down,” Dr. Si Thu said in an interview. A video of the scene posted on Twitter showed several men carrying the victim to an ambulance as blood from his wound dripped onto the ground.

Minutes after the ambulance left, an army truck stopped at the end of the street and soldiers opened fire on the group, Dr. Si Thu said. That was when the other two men were wounded, one in the chest and one in the arm.

Mr. Maung Maung Oo was taken to the Byamaso Social Association Hospital, where he died, said U Zar Ni, a doctor there. U Lei Lei, another doctor at the hospital, said a second protester also died there from a gunshot wound.

Later, after protesters in Mandalay had largely dispersed, a woman was shot in the head and killed as the police and soldiers cleared barricades and fired at people in the streets, apparently at random, a witness said. Dr. Zar Ni said the woman, whose name was not released, was dead on arrival at the Byamaso hospital.

In Yangon, Myanmar’s largest city, a protester named Hein Htut Aung, 23, was shot and killed at a demonstration in Thingangyun Township. His death was confirmed by Nadi Ayar Hospital, where he was taken. Another demonstrator in Yangon, Nyi Nyi Aung Htet Naing, was also shot dead, according to family members. The last post on his Facebook page read “#How_Many_Dead_Bodies_UN_Need_To_Take_Action?”

As teachers gathered to demonstrate at another protest site in Yangon, the police began firing tear gas and rubber bullets near them, and a primary-school teacher identified as Daw Tin Nwet Yi died of a heart attack, a witness said.

The police also arrested at least 100 medical students in Yangon as they were preparing to march in their white coats in a separate protest, witnesses said. Doctors have been at the forefront of the civil disobedience movement, and many have refused to go to their jobs at government hospitals, which the coup brought under military control.

As the police prepared to take the medical students away in trucks, neighbors poured into the streets and blocked the vehicles. But the police eventually pushed their way through.

The first person known to have been killed this month in the protests was Ma Mya Thwate Thwate Kaing, 20, who was shot in the head by the police at a demonstration in the capital, Naypyidaw, on Feb. 9. She died 10 days later, becoming a martyr for the movement.

On the day after her death, the security forces fired into a crowd of demonstrators at a shipyard in Mandalay, killing two, one of them a 16-year-old boy, and wounding dozens.

Another man who attended the shipyard protest, U Kyi Soe, a 48-year-old jewelry trader, was beaten by the police and died during the night, according to his wife, Daw Chaw Ei Thein.

Mr. Kyi Soe had gone to a market near the protest site to buy food but never came home. A friend called later to say that Mr. Kyi Soe had been badly beaten by the police.

Because of a curfew, Ms. Chaw Ei Thein was unable to go see her husband at the friend’s home until early the next morning. When she arrived, he was dead.

“According to the witness, he was brutally beaten by the police during the protest,” she said in an interview. “I saw a very big bruise on the lower left side of his head.” She said she did not pursue an autopsy because it was clear that the beating had killed him.

Another casualty of the shipyard protest was U Yarzar Aung, 26, a construction worker who was shot in the knee by the security forces. He was taken to a military hospital, where family members were not allowed to visit him.

On Wednesday, four days after the protest, the hospital contacted the family and said he had died. At that point, his wife, Daw Phyu Phyu Win, was allowed to see him. She said his body was still handcuffed to the hospital bed.

“When I saw him in the hospital, there were many bruises and injuries on his face,” she said in an interview. “They said my husband was trying to escape and that’s why they needed to tie him up.”

She asked to take his body away for burial, but the doctors refused. She said they told her that he had died of Covid-19 and that the body must be cremated immediately.