Momofuku Seiobo, in Sydney, Will Close in June 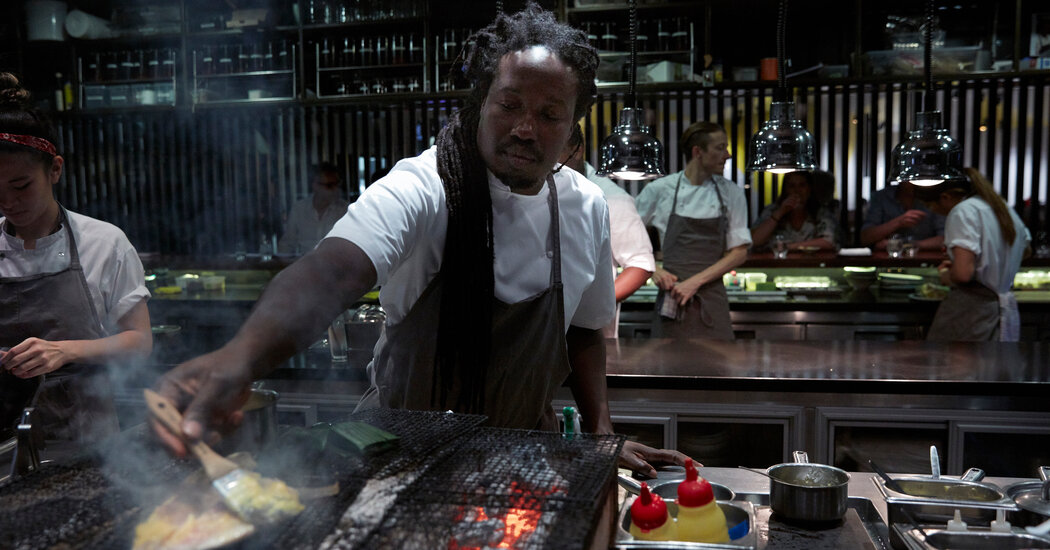 MELBOURNE, Australia — Momofuku Seiobo, the acclaimed restaurant that David Chang opened in 2011 in a back hallway of the glitzy Star Casino in Sydney, will close at the end of June.

Mr. Chang said in an interview last week that when the restaurant lease came up for renewal recently, he and his team decided it was time to close. He made the decision with the chef, Paul Carmichael, and the general manager, Kylie Javier Ashton. When asked for a specific reason, all three said their goal was simply to end the life of the restaurant on a high note.

“We had many conversations about what the future of Seiobo would look like,” Mr. Chang said. “The restaurant is their baby. When you eat there you understand how personal this is for them. There is no Seiobo without them. They’ve given so much to the restaurant — especially this year — and when they said they wanted to go out on top, I supported them completely.”

The restaurant’s last service will be June 26. The staff, who are employed by Star Casino, will have the option to be placed in other restaurant jobs at the casino.

This is the third restaurant in the Momofuku empire to close since the beginning of the pandemic; CCDC in Washington, D.C., and Nishi in New York City shuttered in mid-2020.

When asked last week if there are financial reasons for Seiobo’s closing, Ms. Javier Ashton said that wasn’t the situation: “If anything we have created a business model that is a lot more efficient.”

After Seiobo closed for 18 weeks during Sydney’s pandemic lockdown last year, the restaurant reopened in July with a smaller staff, fewer customers and government-mandated capacity restrictions. But unlike some other Australian restaurants, Momofuku Seiobo thrived.

“It’s probably one of our greatest successes, to have a hard reset and be given the opportunity to create a restaurant from scratch,” Ms. Javier Ashton said. “We created the restaurant that we were always working towards.” Nonetheless, she said, the decision was made to close.

Momofuku Seiobo has won numerous accolades since its opening, and particularly since Mr. Carmichael took over the kitchen. Under the direction of its original head chef, Ben Greeno, the restaurant served internationally inspired cuisine alongside Mr. Chang’s famous pork buns from the original Momofuku restaurant in New York City.

In 2015, when Mr. Carmichael arrived in Sydney after working for Mr. Chang at Má Pêche in New York, he slowly began to change the menu, adding dishes with roots in his native Barbados and taking inspiration from the wider Caribbean. In 2016, Gourmet Traveller — Australia’s premier glossy food and travel magazine — named Seiobo its restaurant of the year. By the time I reviewed the restaurant for The New York Times in 2018, Mr. Carmichael was confident in his declaration that “this is a Caribbean restaurant.”

In 2020, I added Momofuku Seiobo to the World’s Best Restaurants list that I compile for Food & Wine and Travel & Leisure magazines, one of only three Australian restaurants that have made that list. Currently, I consider it the country’s best restaurant.

But the importance of Seiobo goes beyond Australia. Having eaten widely across the world, and particularly in the United States and the Caribbean, I can say with some confidence that Mr. Carmichael is singular in his meticulous and nuanced approach to the food of his homeland.

Osayi Endolyn, the American food writer and co-author of the book “The Rise: Black Cooks and the Soul of American Food,” with Marcus Samuelsson, ate at the Sydney restaurant in 2019. “As a Black person it is incredibly rare to have a multicourse meal that resonates so deeply, to be moved by a chef in such a personal way,” Ms. Endolyn said. “To see someone so decisively and lovingly pay homage to his home region was thrilling.”

Mr. Carmichael, 44, feels that he came of age, personally and professionally, while working at Seiobo. “It was the first time I really felt comfortable in my own skin,” he said in an interview in early March. “Before that I was always trying to appease and apologize. But here I was free of that, and Dave gave me the freedom to do whatever I wanted.”

Mr. Chang gives all the credit for the restaurant’s success to Mr. Carmichael and Ms. Javier Ashton. “What he and Kylie have built together at Seiobo is all their own,” he said. “I’m in awe of the restaurant they’ve created and how they’ve worked together to do it.”

Both Mr. Carmichael and Ms. Javier Ashton spoke about finding their home at this iteration of Momofuku Seiobo. “As a Filipino-Australian kid growing up, I loved food. I loved nice restaurants,” Ms. Javier Ashton said. “But I also never felt like I fit. Now I feel like I fit, like we created a space where someone like me could fit. I’m not sure I’m ever going to fit in anywhere else.”

Mr. Carmichael echoed those feelings. “Seiobo is the only place I don’t feel like a weirdo,” he said.

For now, he is not sure of his next steps, though his preference would be to stay in Sydney. “I love Sydney so much,” he said. “It’s really become my home.”

Awards and accolades were never what drove him, he said, but rather a respect for his culture and an attempt to connect with diners. “I’m sharing a part of me with you,” Mr. Carmichael said. “I don’t know if people know or feel that, but when you eat here I’m giving you a little piece of myself.”

Ms. Endolyn certainly seems to have gotten that message. “I don’t know Paul personally,” she said, “but I know something about his heart through his food. What he’s saying comes from his expertise and how he thinks of his identity. But I can recognize magic. And that man is magic.”