Myanmar Coup Protests Show No Sign of Waning, Despite Killings 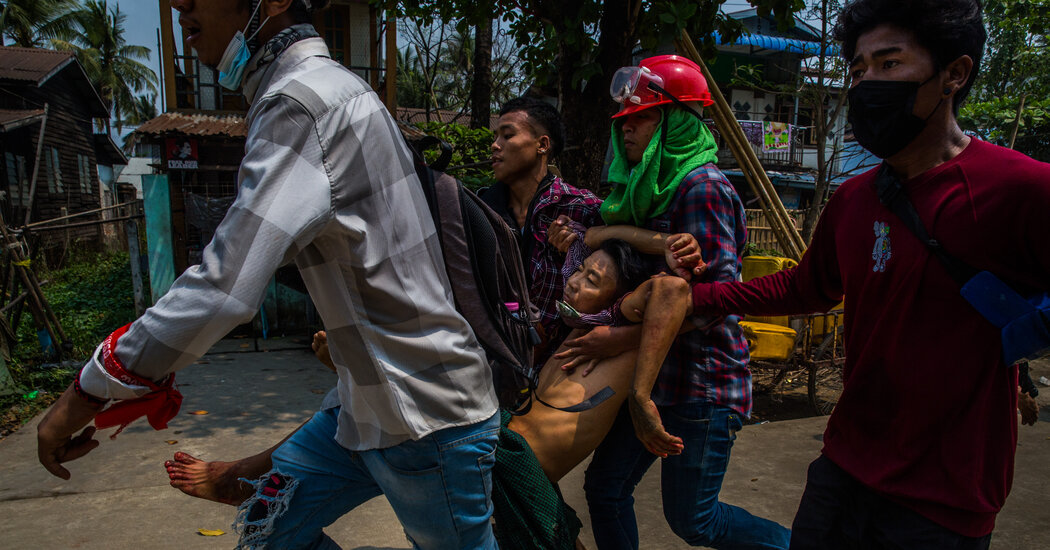 Soldiers and police officers shot and killed at least 51 people in Myanmar over the weekend, as they pressed their campaign of attrition against protesters who have defied them in cities and towns across the country.

Despite weeks of killings by the security forces, a nationwide civil disobedience movement — which has paralyzed much of the economy as well as the government’s operations — shows no sign of waning, a month and a half after the Feb. 1 military coup that ousted the civilian leadership.

“The world is upside down in Myanmar,” said U Tin Tun, who said he saw military personnel in the city of Mandalay commandeer an ambulance and drive off with a woman who had been shot in the head by a fellow soldier.

“We must fight until we win,” said Mr. Tin Tun, 46. “The regime must step down. There is no place for any dictator here in Myanmar.”

Late Sunday afternoon, another wave of killing began in the Hlaingthaya district of Yangon, which is heavily populated by factory workers and where the protests against military rule have been among the most aggressive. A large force of soldiers and police officers was deployed to the township and fatally shot at least 31 protesters, according to a doctor at Hlaingthaya General Hospital. It was the highest daily death toll in one location since the coup.

On Sunday evening, the ruling junta declared martial law in the district — the first such declaration since the takeover — allowing the military to assume all authority in the township from the police.

The declaration came after two Chinese-owned factories in the district caught fire and the Chinese Embassy released a statement calling on the government to take strong action to “stop all terrorism activities.” The embassy said that many Chinese employees had been trapped and injured by the fires, whose cause had not been established.

Hours later, in a separate declaration, the government also placed Yangon’s Shwepyitha district in Yangon, another heavily industrial area, under martial law after large protests were held there on Sunday.

In a Facebook Live video, Mahn Win Khaing Than, one of the leaders of a self-declared civilian government formed in hiding, urged ethnic rebels who have fought the army for decades to join the protest movement in working toward a federal democracy to replace military rule. He called this “the darkest moment of the nation and the moment that the dawn is close.”

Mr. Mahn Win Khaing Than, who was the speaker of the upper house of Parliament before the coup, said in the video posted on Saturday that his group, the Committee Representing the Myanmar Parliament, had spoken by Zoom with leaders of the armed ethnic groups that control much of northern Myanmar.

He said Myanmar’s ethnic minorities had been “suffering various kinds of oppression from the dictatorship for decades” and appealed for unity. “This revolution is the chance for us to put our efforts together,” said Mr. Mahn Win Khaing Than, who is from the Karen ethnic group.

Myanmar’s military, known as the Tatmadaw, has run the country for most of the past 60 years. For the majority of that time, it has battled rebel armies made up of members of ethnic minorities, who inhabit areas rich in jade, timber and other resources.

Though the Tatmadaw ceded some power to elected officials during the past decade, chief among them the Nobel laureate Daw Aung San Suu Kyi, it continued to operate without civilian oversight. In 2017, it waged an internationally condemned campaign of ethnic cleansing against the Muslim Rohingya in western Myanmar, killing thousands and forcing more than 700,000 to flee to neighboring Bangladesh.

Now, the military has brought similar tactics — and some of the same military units — to cities and towns around the country. Soldiers and police officers, who are also under the authority of the army’s top commander, have fired into homes and crowds of protesters, beaten demonstrators in the streets and arrested many hundreds of people, some whom were later tortured, victims and witnesses have said.

More than 110 people have been killed by the military and the police since the coup, according to the United Nations, doctors, hospital staff and relatives of victims.

Of those killed since the protests began, about a fifth have been shot in the head, according to information compiled by The New York Times. More than a fifth of those killed have been teenagers.

The ruling generals’ current strategy, it appears, is to wear down the populace with daily killings and arbitrary violence, calculating that people will abandon their hopes for democracy if enough of them are slaughtered, beaten and arrested.

But so far, the bloodshed has only solidified the resistance.

The Biden administration, which has repeatedly called on the generals to restore power to civilian leaders, announced on Friday that it would let Myanmar citizens who are now in the United States apply for “temporary protected status” because of the danger they would face at home.

“Due to the military coup and security forces’ brutal violence against civilians, the people of Burma are suffering a complex and deteriorating humanitarian crisis in many parts of the country,” said the secretary of homeland security, Alejandro N. Mayorkas, using Myanmar’s former name. He said its citizens would be eligible to stay in the United States for 18 months.

The weekend’s wave of killings began just before midnight on Friday, when a crowd of people gathered outside a police station in Yangon seeking the release of three brothers who had been seized from their home. The police opened fire, killing two men, relatives of the victims said.

On Saturday, the killing continued with four more victims in Yangon, three in the town of Pyay and one in the town of Chauk. Both towns sit on the Irrawaddy River north of Yangon, Myanmar’s largest city.

In Mandalay, the second-largest city, where the first major street protests against the coup were held on Feb. 4, four protesters were shot and killed by the security forces on Saturday, according to doctors who tried to treat the victims. A fifth death was confirmed by a relative of the victim.

In Mandalay on Saturday, after police officers began shooting at protesters, about two dozen students who had been demonstrating fled and took refuge in the nearby home of Daw Pyone, 49.

Police officers and soldiers followed them there and confronted Ms. Pyone, said her daughter, Ma Tin Nilar San, who hid with the students under blankets and mosquito nets. When Ms. Pyone refused to give them up, Ms. Tin Nilar San said, a soldier shot her in the head from a few feet away.

“I was crying in hiding and I was shaking because I was so afraid,” said Ms. Tin Nilar San, 28. “My mother gave birth to me by risking her life. But I could not save my mom’s life when she was in need and calling my name.”

The soldiers began firing randomly inside the house, and most of the students came out of hiding, she said. Eighteen were arrested.

After the police and soldiers left, Ms. Tin Nilar San said she and the remaining students carried her mother, who was still alive, to a nearby Buddhist monastery, where volunteer medics were treating wounded protesters.

They put her in an ambulance. But before it could be driven away, about 20 soldiers and police officers arrived, said Mr. Tin Tun, who was coordinating emergency care at the monastery. They broke down the door of the monastery, and everyone fled or hid, he said.

Mr. Tin Tun said he found a place to hide near the ambulance. He said he heard the soldiers say that Ms. Pyone appeared to have died, and that they should take her to a cemetery to be cremated.

The soldiers then drove off in the ambulance, he said. Ms. Pyone has not been seen since. Family members, hoping she might have survived, have looked for her at a prison and at police and military hospitals, without success.

“I cannot sleep, I cannot eat anything,” Ms. Tin Nilar San said. “I want my mother back. She is such a nice woman with a kind heart. She risked her life to save all the students hiding in our house.”