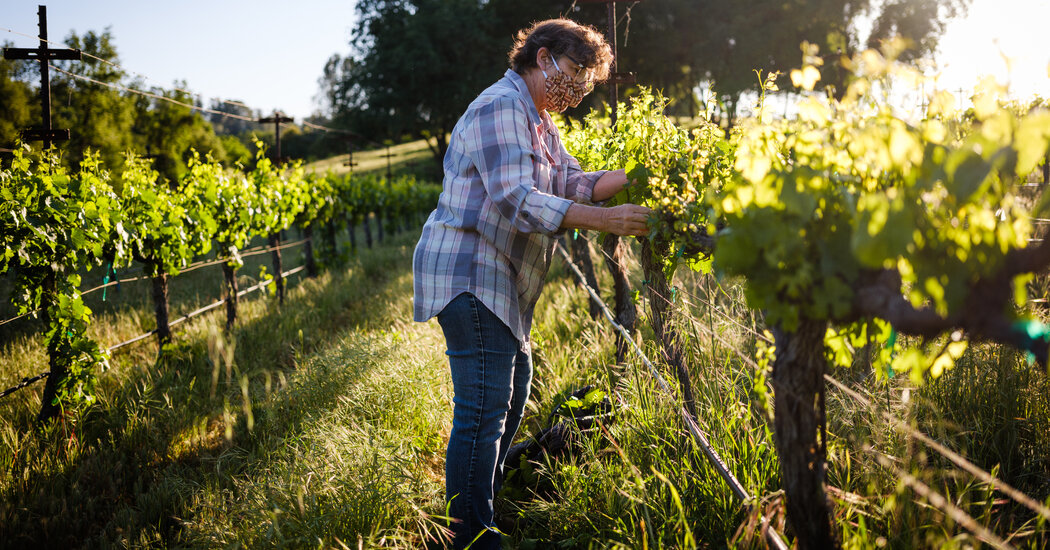 Brianne Day makes a wide array of wines from the Willamette and Applegate Valleys in southern Oregon. Along with the usual pinot noirs and chardonnays, she also uses unexpected varieties and makes creative blends that are always a treat to try.

When the pandemic struck in March 2020, she feared the worst, as her Day Wines tasting room closed along with the restaurants where many of her wines were sold.

When I spoke to Ms. Day and others in the wine industry in the spring of 2020, they were scrambling to find a way of selling wines, worrying whether they would be able to pay their workers and concerned about how their businesses would survive.

A year later, their worst fears were not realized. Instead, as the pandemic threatened their way of working, many were able to adapt. Through flexibility and timely government loans, some producers did better in 2020 than they ever imagined was possible.

“I am utterly surprised with how last year turned out and the direction of the current year,” Ms. Day said earlier this month.

Like many small wine producers around the country, Ms. Day was used to doing business in a time-honored fashion: placing her wines in good restaurants around the country where, in the context of fine food and other excellent bottles, and with the help of the sommeliers talking directly to diners about her wines, her brand would grow.

A few times a year she, or a representative, would travel to key markets, speaking directly about the wines to restaurants, retail shops and consumers, hoping to build interest and loyalty.

The pandemic made that business model impossible. Faced with that predicament a year ago, Sara and Matt Licklider, the proprietors of Lioco Wine Company, a small California producer that makes balanced, nuanced wines, were simply trying to survive.

They furloughed their nine-person staff, including themselves, and pivoted to direct sales to consumers, bypassing the distribution network to restaurants, which had largely shut down.

“I’m not sure what our business will look like on the other side of all this,” Ms. Licklider told me last year.

In 2021, the business looks pretty good, Mr. Licklider said, though, as predicted, a lot different than it had before.

“We had to make some pretty aggressive changes to our operations,” he said. “We shrank, we streamlined, we got lean and mean.”

Instead of focusing on restaurants, they put their energy into their mailing list, customers with whom they had developed a relationship either through their website or their tasting room in Healdsburg in Sonoma County.

They met with consumers and retailers over Zoom. They sent out videos they had shot on their phones. Even with Paycheck Protection Program loans they were not able to hire back all their employees, but they got by with a smaller team.

“Our direct sales went through the roof,” Mr. Licklider said. “It felt deeply personal that people were going out of their way to purchase wine directly.”

Some wine industry analysts have long urged wine producers to step up their direct internet sales. Though many had been reluctant to change their methods, the pandemic forced their hands.

“Other industries have been doing this forever,” said Paul Mabray, a longtime proponent of digital wine commerce whose new company, Pix, is intended to match people to wines they will love through a proprietary method.

“Had it not been for the pandemic, I don’t think we would have seen this pivot,” he said. “Now the genie is out of the bottle.”

Where previously direct sales efforts had largely been limited to business at tasting rooms, Mr. Mabray sees a cultural transformation that will continue as producers become more comfortable with their new tools.

“How do I reach the consumer in their home? What do I need to accomplish this? Zoom? Social media? Sending out small-size samples?” Mr. Mabray said. “They can touch the consumer in ways that they ignored until now.”

For Nancy Irelan, who with her husband, Michael Schnelle, operates Red Tail Ridge Winery in the Finger Lakes region of New York, the pandemic provided an unexpected opportunity. With airline travel out of the question for many people in 2020, the Finger Lakes became a vacation destination for New York wine tourists.

Despite losing much of their distribution in restaurants, they were able to enhance their small tasting room by creating an outdoor tasting area. They had furloughed their employees but, with a P.P.P. loan, were able to rehire some to manage the tasting room traffic flow, as dictated by Covid protocols.

“It was helpful to be small and nimble because we were able to make some changes quickly,” she said. “We’re doing pretty well.”

It didn’t hurt that the 2020 vintage went smoothly.

“It was a beautiful vintage, you couldn’t have asked for better, the highlight of the entire year,” she said. “Mother Nature was pretty kind to us.”

The same, sadly, could not be said of the West Coast wineries. For many, the forest fires that ravaged Northern California and Oregon turned out to be far more threatening than the overall damage of the pandemic.

Martha Stoumen Wines, a tiny producer, makes fresh, joyous wines in Sebastopol, Calif., in a large space shared among six producers. When the pandemic struck last spring, Ms. Stoumen was unable to make her usual spring sales trips, which ordinarily generate the income she needs to finance the next year’s wines. She feared she would have to go out of business.

Like other producers, she buckled down and focused on direct sales. After three or four tries, she was able to get a P.P.P. loan only with the help of an investor in her business, who had a private banker.

Even so, business was difficult, but sales through the spring seemed enough to sustain her. A lot of things she feared did not come to pass.

“We were all doing whatever we could,” she said. “Then in August the fires struck.”

Instead of waiting to harvest grapes at peak ripeness, Ms. Stoumen said, she was forced to pick as soon as possible so that they would not be tainted by smoke from the fires. Some grapes could not be picked at all.

Any taint from fires near harvest time, however, resides on the skins, making such macerations risky. Instead, she was compelled to produce rosés and light reds, which, not incidentally, fetch lower prices.

Her experience with the fires put other 2020 glitches into perspective. A worldwide shortage of shipping containers, caused by pandemic trade disruptions, postponed her plan to export wines to New Zealand, though the shortage also helped to boost consumption of domestic wines in the United States, she said. And she dismissed problems like getting timely shipments of bottles and corks as the sort of hiccups one might deal with in any year.

“The fires felt really destructive and heavy,” she said. “It makes me look back and think that every nonfire vintage was such a gift.”

Lioco, too, had to make less wine than its owners intended because of the fires. As with Ms. Stoumen, the Lickliders will be making more rosés and whites than reds, though Mr. Licklider was optimistic about the reds Lioco has produced.

“They’re not showing any smokiness, knock on wood,” he said.

Ann Kraemer owns Shake Ridge Ranch, a 46-acre vineyard in the Sierra Foothills of California, whose grapes are much in demand by many excellent producers. She feared a year ago that the pandemic’s disruption would force many winemakers to cut back on their purchases.

Some in fact did, but she was able to find other buyers for her crop, including some home winemakers. Others dropped out — not because of the pandemic, but because of the fires.

Even though the closest was more than 60 miles from Shake Ridge, smoke began to drift her way. That caused several clients to decide against purchasing grapes, fearing they might be tainted with smoke. The grapes were not.

“If it weren’t for the whole smoke issue, it would have gone swimmingly,” Ms. Kraemer said. All in all, she called it a weird year.

“You didn’t realize the tension of Covid,” she said. “And the social protests and strife added a whole new level, and then having the fires strike? It was just crazy.”

She feels optimistic for 2021, however. Her usual buyers want to increase their purchases to make up for the wine they didn’t make in 2020. Best of all, she said, her vineyard crew had all been fully vaccinated.

For Ms. Day of Day Wines, dealing with Oregon’s fires in 2020 posed a greater challenge than Covid-19 logistics.

“The pandemic was worldwide and affected everyone, and the burden of overcoming the issues was somewhat offset by the government,” she said. “With the fires, the weight and responsibility fell directly on the shoulders of the business owners with no help from anyone.”

Ms. Day had arranged to make 25 tons of pinot noir into wine for a distributor’s proprietary label. But when smoke taint seemed like an inevitable side effect of the fires, she allowed the distributor to withdraw from the deal.

Instead, she kept the grapes for herself and made a rosé, which, like the great Beyoncé album born of a challenging personal situation, she called Lemonade.

“I bottled 1,200 cases of Lemonade in early November, and it was sold out by the end of the year,” she said. “That was a really huge boost financially, at a time of year that is particularly cash intensive because of harvest and bottling costs.”

She is planning to nearly triple her production of Lemonade in 2021.

When Viridiana Padilla Johnson was a little girl in the Mexican state of Sonora, Christmastime celebrations radiated out from her grandmother’s kitchen. That’s...
Read more
Food

How Will Americans Eat Next Year? Food Predictions for 2022

Last year at this time, optimistic trend forecasters predicted that the cork would burst from the bottle by summer. With vaccines in arms,...
Read more
Food