Protests Over Gas Prices Rage On in Kazakhstan 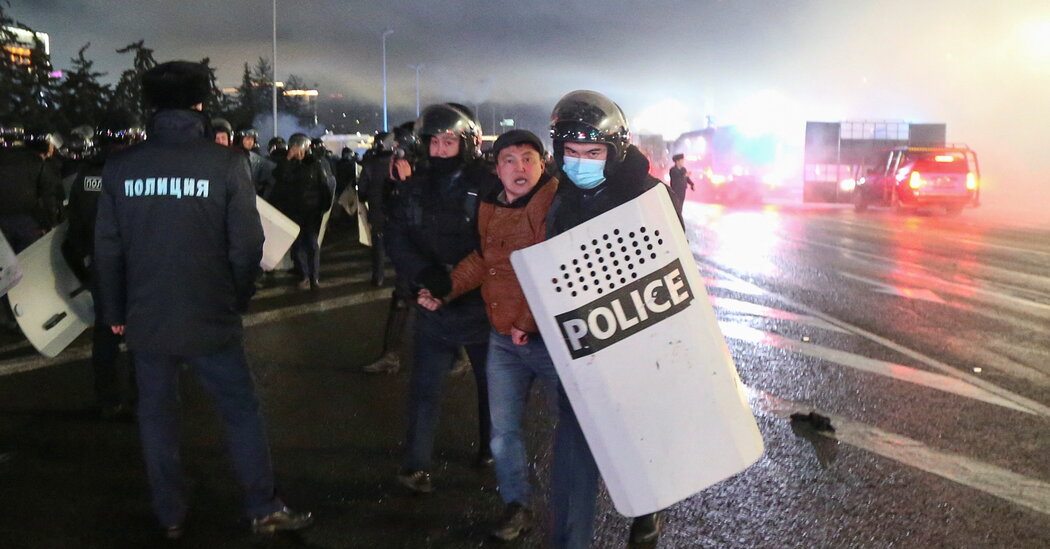 MOSCOW — Thousands of people returned to the streets across Kazakhstan on Wednesday for a fourth straight day of demonstrations driven by outrage over surging gas prices, in the biggest wave of protests to sweep the oil-rich country for decades.

Protesters stormed government buildings and captured police vehicles despite a strict state of emergency and government attempts to concede to their demands, including by dismissing the cabinet.

Anger has been building since Sunday, when Kazakhs began protesting after the government lifted price caps for liquefied petroleum gas — frequently referred to by its initials, L.P.G. — and the cost of the fuel doubled.

Many people in the country of 19 million found the price increase particularly infuriating because Kazakhstan is an exporter of oil and gas. It added to the economic misery in a country where the coronavirus pandemic has exacerbated severe income inequality.

In the days since, demonstrators have demanded the ouster of the authoritarian political forces that have ruled the country without any substantial opposition since it achieved independence from the Soviet Union in 1991.

The developments have plunged Kazakhstan, which had been regarded as politically and economically stable and is at the heart of what President Vladimir V. Putin of Russia sees as the Kremlin’s sphere of influence, into chaos and upheaval.

The president of Kazakhstan, Kassym-Jomart Tokayev, announced early on Wednesday that he was dismissing the prime minister and his entire cabinet, and imposing a strict two-week state of emergency in much of the country.

In an address late on Tuesday, he also said the government would reimpose price caps for L.P.G. — which powers many cars in Kazakhstan — at half of the market rate.

“Dear compatriots, I urge you to show prudence and not succumb to provocations from within and from without, to the euphoria of rallies and permissiveness,” Mr. Tokayev said in a video address. “Calls to attack civilian and military offices are completely illegal. This is a crime that comes with a punishment.”

According to a document published on the president’s website, the state of emergency includes an overnight curfew; restrictions on movement, including curbs on entering and leaving Almaty, the country’s biggest city; and a ban on mass gatherings.

The government blocked social networking sites and chat apps including Facebook, WhatsApp, Telegram and, for the first time, the Chinese app WeChat. All public protests without a permit were already illegal.

In spite of the government’s attempts to quell the protests, footage posted online on Wednesday showed thousands of people storming the main government building in Almaty.

Smoke billowed from City Hall as the crowd began to disperse. The regional branch of the Nur Otan party, which is without opposition in Parliament, was also set on fire, according to local news media reports, as was the former presidential residence.

News services reported renewed clashes between protesters and the police, who used stun grenades and tear gas to quell the crowd. Protesters also set fire to the prosecutor’s office in Almaty and then headed to the president’s residence.

According to the Almaty police, more than 500 civilians were beaten and protesters burned 120 cars, including 33 police vehicles, and damaged about 400 businesses. More than 200 have been detained.

The protests began on Sunday in the southwestern oil town of Zhanaozen, where at least 16 oil workers striking for improved working conditions were killed by the police in 2011. The public displays of anger quickly spread across the country.

In Aktau, a city on the Caspian Sea which serves as the country’s main oil and gas processing hub, protesters stormed the Akimat, the local government building. Local activists tried to control the crowd and prevent violence, according to Mukhtar Umbetov, a rights activist who took part in the protest.

The gas price increase was a spark that ignited long-simmering discontent over the past few years over income disparities in the resource-rich country, Mr. Umbetov said.

The coronavirus pandemic has exacerbated inequality, with rapidly rising prices hitting the poor the hardest, he said. The main problem, however, was more fundamental: The Kazakh government, he said, “has removed all legal ways to participate in politics.”

“People don’t have any political intermediaries who would solve problems that exist in the country,” he said in a phone interview from Aktau. “Kazakhstan is rich, but its natural resources are not working in the interests of all — they work in the interests of a small group of people.”

A decoy soldier on a roadside across the Dnipro River from the Zaporizhzhia nuclear complex last week. Both Ukrainian and Russian officials reported...
Read more
World

A serviceman with a Russian flag on his uniform near the Zaporizhzhia Nuclear Power Plant this month.Credit...Alexander Ermochenko/ReutersThe Ukrainian military on Saturday reported...
Read more
World

Three Women of Bucha: Their Deaths and Lives

BUCHA, Ukraine — One woman was badly beaten and shot through the eye. Another, held captive by Russian soldiers, was found in a...
Read more