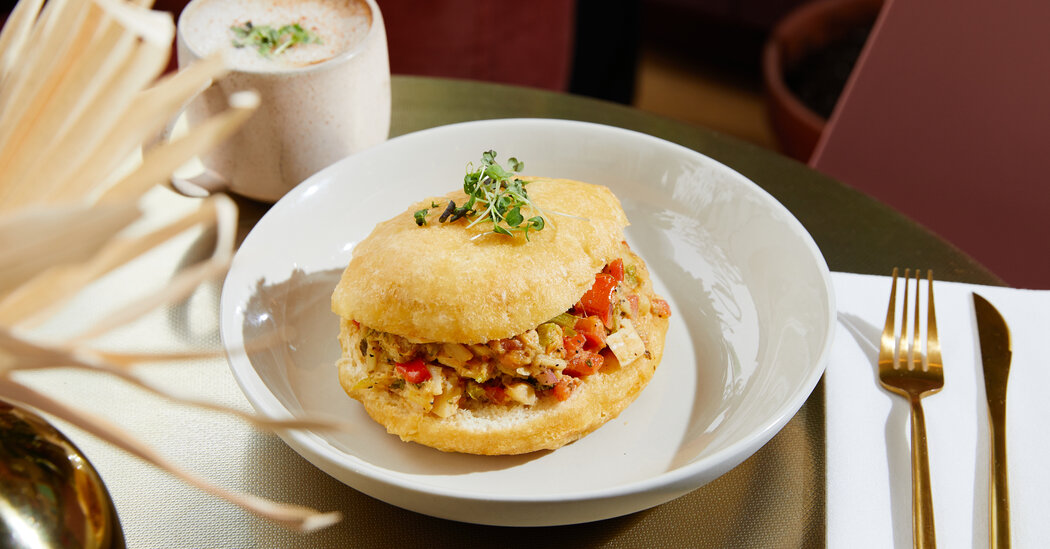 New ideas are bubbling up faster in vegan restaurants than in any other kind of kitchen right now. People who can’t see this are looking in the wrong places. They’re probably used to seeing creative leaps that started in kitchens that function as research laboratories, like Noma in the last decade and El Bulli before that, and then trickled down to other restaurants.

But vegan cooking isn’t trickling down. It’s trickling up. First it was a fringe diet, then a grass-roots movement. Those roots were eventually fertilized by ad campaigns from animal-rights groups. Now that well-funded companies including Impossible Foods, Beyond Meat and Tyson Foods have “plant-based” products to push, veganism has a marketing budget PETA never dreamed of. Restaurants can’t lead this movement. They can barely keep up.

Often, the owners and chefs of the new crop of plant-based restaurants are themselves fairly recent converts. Many seem to come out of nowhere or, more accurately, to come from establishments that nobody would describe as being on the cutting edge of cuisine. They’re not especially interested in originality for its own sake, a core value for chefs working in the fine-dining idiom. They’re original by necessity, because they’re inventing food for appetites that didn’t exist five years ago.

Aunts et Uncles, a cafe that Nicole and Michael Nicholas opened in the Little Caribbean area of central Brooklyn last October, looks like any number of newer all-day vegan hangouts to the west in Greenpoint, Clinton Hill and Park Slope. Sunlight pours through a glass wall on the street side, falling on fiddle-leaf fig trees and other houseplants loved by Instagram. There is a cute coral-pink couch, some midcentury-style molded plastic chairs in sea green and a row of bent plywood stools at the counter.

Like those other cafes, Aunts et Uncles can make your latte with steamed oat or nut milk. It separates itself from the avocado-toast crowd, though, with its Caribbean dishes, all of which have been rejiggered without goat, cod or any other animals.

Aunts et Uncles is not the first place to approximate seafood with hearts of palm. Using it to make bake and saltfish, though, the restaurant comes up with a wonderful thing that has the feeling of a fresh discovery.

In its original form, which can be found locally in a wide belt that starts on Fulton Street near Nostrand Avenue and keeps going south all the way to Brooklyn College, bake and saltfish is a pairing of fried dough with salt cod that’s sautéed into a soft mash with onions, tomatoes and slivers of Scotch bonnet chiles. Sometimes bread and fish go side by side and sometimes, as at Aunts et Uncles, they’re united in a sandwich.

The pungent emphasis of salt cod is missing, of course, from the Aunts et Uncles version. The hearts of palm (sustainably raised, according to the restaurant) don’t amalgamate with the other vegetables; instead their mildness and slight sweetness provide a respite from the Promethean spark of the chiles.

What you make of the hearts of palm stuffed into a pretzel bun and sold as a lobster roll will depend on your capacity for suspending disbelief. If you succeed, you can move on to appreciating the gentle seasoning of lemon, dill and celery. If you fail, you can focus on how much more you’d spend on a real lobster roll than the $13 you’ll pay for the lobsterless one at Aunts et Uncles.

Next door on Nostrand Avenue is the Immaculee Bakery, whose Haitian pâtés are an irresistible siren to both kinds of customers — those who call them pah-tays and the ones who ask for patties. While the flat, turmeric-yellow Jamaican patties sold at street carts and pizzerias probably descend from Cornish pasties, the pâté makers of Haiti fold and roll a high-rising, flaky puff pastry of French origin. Slabs of butter are a given, or so I thought.

The Nicholases asked the bakers at Immaculee to rework their dough without dairy products. They rose to the challenge beautifully. What is sold, at $4 each, as the AU Immaculee patty is a tall, many-layered golden pastry that may be even more crisp than the original. It’s so good that I wish it held a filling more compelling than lightly spiced Beyond Meat — vegetables, let’s say.

The meat substitute makes more sense as an optional add-on to Aunts et Uncles’s mofongo. I don’t know if any mofongo can truthfully be described as light, but this one comes close. Crushed, boiled green plantains are covered with chopped tomatoes, peppers and red onions; it eats less like a starchy side dish than like a substantial salad.

The best use of Beyond Meat, though, is on something called the Tivoli taco, where it carries a heavy load of cumin and ground chiles. Spread out on a flour tortilla and topped with tomatoes and onions, the Tivoli taco doesn’t resemble anything you’re likely to find in a Mexican taqueria. But you’ll recognize it if you grew up in a house where taco night meant stirring ground beef with a supermarket spice mix, and chances are you’ll think it’s an improvement.

Mr. Nicholas was born and raised in Flatbush to parents with roots in St. Lucia. Ms. Nicholas, his wife, grew up in Toronto in a family whose origins were in St. Vincent and Trinidad. Their home-cooking experiments after they adopted an animal-free diet nearly five years ago laid the foundations for the menu at Aunts et Uncles, which they came up with in collaboration with Lesley Ann Regisford, a relative who sometimes works in the kitchen.

The name Aunts et Uncles suggests a caretaking angle to the hospitality and the cooking. People eat plant-based diets for many reasons, but Black vegans often talk about their desire to reverse the negative health outcomes that a tangle of historical, economic and other factors have brought to their community. In East Flatbush, for instance, the community district that Aunts et Uncles serves, obesity and hypertension rates are higher than in New York City as a whole, according to data from the city. While the science is not settled, some studies have found that switching to a vegan or mostly vegan diet can lead to weight loss and lower blood pressure.

No matter what you choose to eat when you are outside Aunts et Uncles, though, you can feel as if somebody is looking after you when you are inside. Once, when I walked in with my arms wrapped around a book, a coffee cup and some groceries I’d picked up on my way to lunch, a server handed me a shopping bag. If I hadn’t been so hungry, I might have added to the haul by buying a Thank God for Haiti T-shirt designed by Mr. Nicholas. Or one of the books — Colson Whitehead’s “Harlem Shuffle” or Beth Lesser’s collected photographs of the Jamaican dancehall scene in the 1980s were both tempting — displayed on one wall.

Instead, I bought a bowl of vegetable soup, seasoned in the style of the islands by fresh thyme, cilantro and black dots of pepper. Like all good soups, this one seemed to want to be liked. I don’t know what it did to my weight, but I think I felt my blood pressure drop.