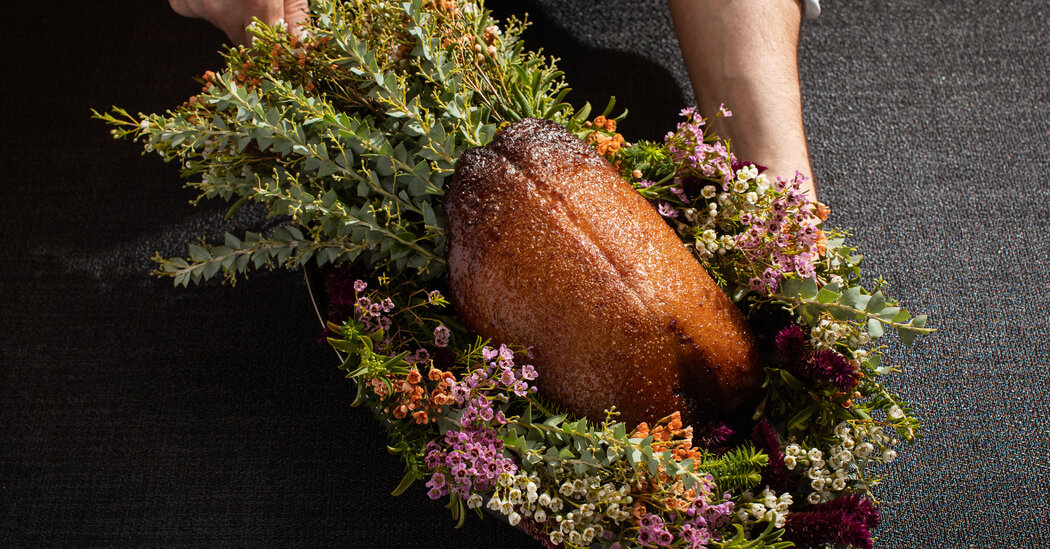 Most all of us, I suspect, will always remember our first real restaurant meal of the Covid era — not the time we sat in the street next to a potted palm, blinking at the sun like some cave-dwelling animal, but the time we stepped inside a dining room and took off the mask. After all we’d been through, the pleasure of an indoor meal mixed with our fear of airborne pathogens to create a very particular cocktail of giddiness and nervousness, just the kind of psychological state that tends to put down roots in our heads.

For me, it happened at Francie, in Williamsburg, Brooklyn, on the March day I got my first dose of vaccine.

Very few of a restaurant critic’s working meals have a sense of occasion, but this one did, and Francie fit the moment like a pair of Lululemon ABC pants. Eating indoors was the only option there; Francie’s sober neo-Renaissance building, designed as a bank in 1888, has no street or sidewalk frontage that can be used for outdoor tables. But having to wait until last December to open gave the contractors time to fit virus-zapping ultraviolet lights and filters into the air ducts.

The dining room was only one-quarter full, the limit at the time, and plexiglass barriers stood between the tables. Otherwise, almost everything I’d been missing about eating inside restaurants came back in a flood — a partly alcoholic flood that began with four cloudy ounces of an icy shaken martini so smooth it was almost frictionless. (I can’t explain it, but martinis taste better indoors.)

Next, I went after half a dozen littleneck clams that were nested into a tangle of rockweed and pebbles, as if they’d been washed up on the shore. Their liquor mingled with horseradish-spiked parsley juice and brine. I drank it like a vampire.

Although Francie’s roast duck was by then a regular feature of my Instagram feed, I still did a double-take when I encountered it in person, a great golden honey-lacquered football surrounded by green needles of pine and rosemary. After returning briefly to the kitchen, it appeared again in slices with a dry-aged concentration of flavor that a steakhouse would envy. Yet the star of the dish turned out to be its condiment, a sticky, salty and porky soppressata jam. It was wonderful smeared on a piece of duck. I have no doubt it would be delicious on a frozen bagel or a stack of junk mail.

The chef behind these and other persuasive arguments for getting out of the house is Christopher Cipollone. I last met up with his cooking some years ago at Piora, a West Village restaurant where he presided gracefully over a wedding of Korean and Italian cuisines. He later spent a year in San Francisco in a fully Italian mode at Cotogna.

His menu at Francie, where he is also an owner, is less programmatic than what he did at either of those places, but he hasn’t lost his feeling for pasta, and he can still reach high into his cupboard for an Asian ingredient without pulling a muscle.

Mr. Cipollone’s cooking seems a little less tightly wound now than it did at Piora. Francie wears its fine-dining attitudes loosely and comfortably, while flashing signals that none of its fanciness should be taken too seriously. The restaurant commissioned cloth face masks with “Francie” embroidered along the jawline, then strapped one onto an Italian marble sculpture of a young woman that sits in the private dining room. Around Halloween, a couple of full-size skeletons were stationed at the bar. One wore a vintage-store cape and fake pearls, the other a porkpie hat — Andie and Duckie from “Pretty in Pink.”

I waited until October, when dining indoors had become routine for me, before going back. The plexiglass was gone, and so were most of the one-day-at-a-time pandemic jitters. I settled into a table near the bar to figure out how many of the joys of my first meal had been induced by post-confinement delirium.

There was not a lot of joy in the only plant-focused main course, a pithivier filled, like a bargain bowl from a 1970s hippie health food restaurant, with an underseasoned lump of lentils, rice, mushrooms and eggplant. But there was plenty to like about the herb-crusted halibut fillet the kitchen had roasted and coupled with a bright and fruity emulsion of red wine and butter.

Francie’s roast duck is served without its legs or wings, but the kitchen puts the rest of the bird to use in other dishes. There is a duck sausage appetizer, duck Bolognese with pappardelle, and housemade duck mortadella draped in pink folds over little rafts of toasted brioche, with pistachio mustard.

These mortadella crostini are exactly the kind of free interpretation of Italian tradition that Mr. Cipollone excels at. He does it again when he reworks the old autumn combination of pasta with sweet pork sausage and bitter brassicas. His rigatoni are tossed with wilted spigarello; the sausage, crumbled, is hidden behind chopped chanterelles and vivid pieces of a Japanese heirloom pumpkin.

And if all this still hasn’t persuaded you to put on a pair of shoes, let me direct you to an attraction that Francie calls soufflé cakes. These are something like blini that rise, and rise some more, until they take the shape of a high chef’s toque. The sweet cakes are meant to be smeared with seaweed butter and a gleaming black pool of caviar.

For some, the meal will end with mascarpone cheesecake or a doorstop of a Neapolitan sundae constructed by James Distefano’s pastry kitchen. Full disclosure: I’ve never made it past the cheese course. Mr. Cipollone’s partner in Francie, John Winterman, pilots a marble-topped cheese cart around the dining room.

When he had steered it into a berth by my elbow and raised the lid on a dozen or more specimens, I went into a kind of trance while he carved a soft ash-blackened log of Pennsylvania chèvre and an herb-crusted wedge distilled from the milk of Alpine cows. After three or four (I wasn’t counting) he finally scooped up a mouthful of Époisses that flowed, glacially, from the spoon to the plate.

You probably shouldn’t eat this way every day. But when you’ve been wandering and lost, in the woods or in the wilds of your apartment, Francie is there to welcome you back.