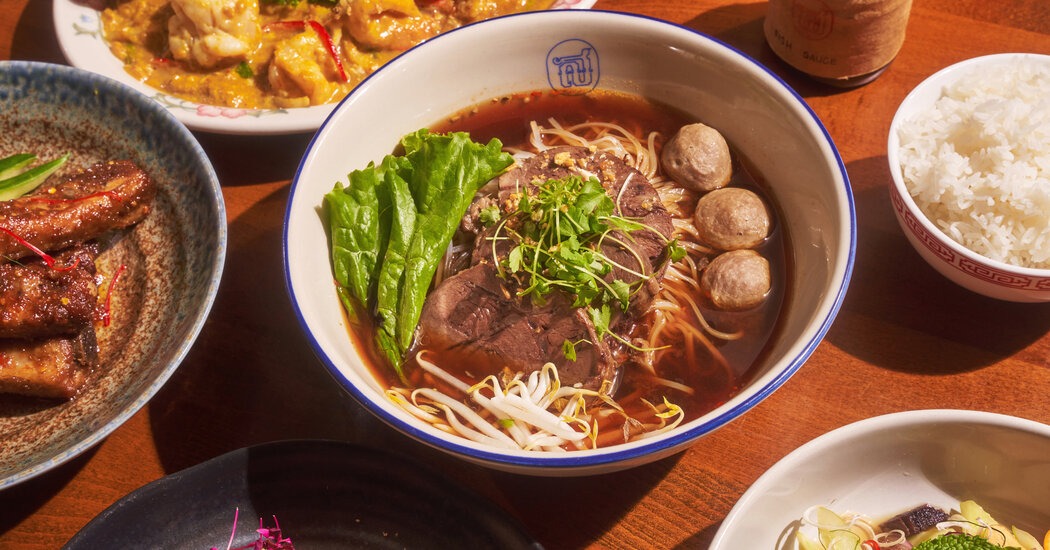 It was a sweltering afternoon in August when I first came to Soothr, and I was wishing I’d visited several months earlier. Thai noodle soups are the restaurant’s specialty, and while summers in New York City are not kind to anybody, they are especially harsh if you happen to love noodle soups. When the city seethes under temperatures in the 90s, thinking about a scalding bowl of soup sets off an internal battle of anticipation and fear that can make you feel like Alex in “A Clockwork Orange” after his reconditioning.

Of course, summers in Thailand are no picnic, either. The country has an ingeniously simple solution to the hot-soup-in-August problem: ladling the broth into a separate bowl, where it can cool while you eat everything else. This style is called, oxymoronically, dry noodle soup. It figures heavily on the menu at Soothr, taking the dread out of my first bowl of soup that afternoon and helping lure me back for several more meals.

The particular dry noodle soup I ate was a variation on tom yum. Sour and deeply aromatic, tom yum with shrimp is a takeout staple that’s fairly uniform across the United States. Thailand, though, offers dozens of variations on the theme, including one from the central province of Sukothai that incorporates salty pink commas of dried shrimp. This is Soothr’s version.

You can have it as a regular “wet” soup, of course, in which case the rice noodles, the sliced roast pork and the springy pieces of fish cake will be nearly submerged in a pork broth that is tart with fresh lime and brimming with lemongrass and makrut lime leaf. If you get it as a dry soup, though, the citrus juice and a paste of aromatics form a potent sauce for the noodles. When the broth, served in a cup on the side, is cool enough to drink, it turns out to be rich with pork flavor and uncomplicated by lime or other seasonings. Alternating mouthfuls of tart, pungent noodles with sips of warm broth is a mesmerizing experience in any weather.

Soothr (pronounced sood; it rhymes with mood, sort of) opened in the summer of 2020, and for several months it got along with only takeout and outdoor tables. By the time I came around a year later, the dining room was in full swing. In fact, except for a brief pause from 4 to 5 p.m. while the employees catch their breath, it is packed at just about any time of day, as are the back patio and the sprawl of two-tops out front on East 13th Street.

The interior manages a neat combination of modern New York industrial (exposed rafters and ducts, a steel accordion gate between tables) with traces of an earlier era (whorls of neon, a rotary pay phone). The jade-gray walls have a soft luster, like glazed pottery. The effect is suggestive and allusive; it’s as if you’ve been transported to a place and time you can’t quite identify.

You might feel the same way about the laminated, placemat-size menu of cocktails, each named after a gemstone. At first glance it appears to have been salvaged from the kind of Chinese-Polynesian restaurants found on the outskirts of many American cities in the 1960s and ’70s, under names like the Double Dragon Inn. When you look closer, you see tamarind syrup, elderflower liqueur and other ingredients that betray the hand of a contemporary Manhattan bartender. (That hand belongs to Supatta Banklouy, one of the owners.)

Soothr was first conceived as a simple shop selling a few varieties of Thai noodles, said Chidensee Watthanawongwat, another partner. The third owner, Kittiya Mokkarat, grew up with Ms. Banklouy in Sukothai, and wanted to serve tom yum the way they learned to eat it at home. Mr. Watthanawongwat, for his part, had a meatball recipe borrowed from his family’s sausage-making business in northeastern Thailand.

After this stripped-down concept was handed over to a chef, Nate Lingwan, the menu began to grow. Ms. Lingwan, who has cooked at Fish Cheeks in NoHo, and Sailors Thai in Sydney, Australia, now presides over a three-page menu, much of it devoted to things other than noodles.

Her steamed jeeb dumplings are unusually fine, the shumai wrappers stuffed with a pork-and-shrimp filling that’s crunchy with water chestnuts. Chicken, fried in the light and irresistible style of the city of Hat Yai, tastes of white pepper and heaping quantities of garlic.

Ms. Lingwan builds her beef salad, or yum nuer, around remarkably flavorful braised beef; it isn’t as loaded with fresh hot chiles as some other versions, but her use of husk cherries for their sweet-tart charge is inspired.

The pork ribs in a main course called si-krong pad ped are braised for tenderness, fried for crunch and tossed in a smoldering red-chile paste for flavor.

Koong karee, or shrimp curry, might be found along Yaowarat Road, the central artery of Bangkok’s Chinese community. An alluring ooze of creamy yellow curry is further thickened by stirring in eggs, as in egg-drop soup. The dish, which infuses Thai flavors into old-school Chinatown cooking, is more than the sum of its parts.

No matter how far you follow the side roads and back alleys of Soothr’s menu, you will probably be led back to noodles.

There are translucent rice vermicelli in a rich beef broth, brightened by a heap of shredded basil and fortified by hunks of braised beef along with some meatballs made the Watthanawongwat way.

Those are rice vermicelli again in the nam tok, the creamy, spicy soup thickened with pork blood. Once little more than a rumor in New York, blood soups are now more readily found, to the delight of those who appreciate the way their almost velvety texture soothes the clamorous spices.

There are wide, flat egg noodles with pink, crisp-edged ovals of roast duck and steamed gai lan in a puddle of thick, dark soy gravy; it’s somewhere between a dry soup and a full-on soupy soup.

But summer isn’t quite over yet, and I am still feeling the pull of the true dry soups like ba mii pu. According to the restaurant, it’s another dish with a debt to Chinese cooking; the egg noodles are topped with roast pork and moistened with black soy, sticky and thick. The name means crab noodles, though, and a pile of very good crab is the heart of the dish, and though I still don’t understand precisely what makes the combination of crab meat with roast pork and black soy so good, I can always come back for another bowl when the weather cools down.