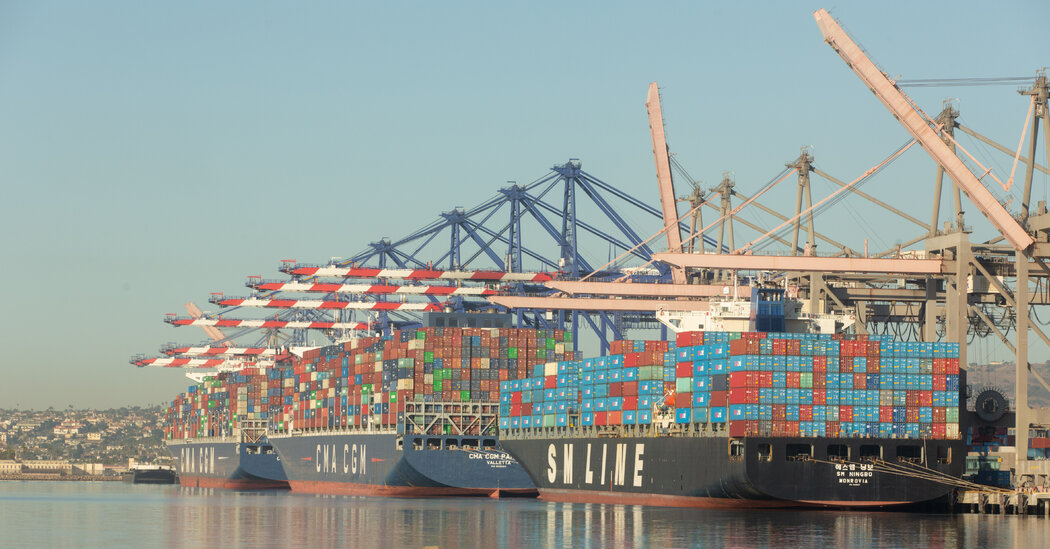 Consumer prices jumped more than expected last month, with rent, food and furniture costs surging as a limited supply of housing and a shortage of goods stemming from supply chain troubles combined to fuel rapid inflation.

The Consumer Price Index climbed 5.4 percent in September from a year earlier, faster than its 5.3 percent increase through August and above economists’ forecasts. Monthly price gains also exceeded predictions, with the index rising 0.4 percent from August to September.

The figures raise the stakes for both the Federal Reserve and the White House, which are facing a longer period of rapid inflation than they had expected and may soon come under pressure to act to ensure the price gains don’t become a permanent fixture.

On Wednesday, President Biden said his administration was doing what it could to fix supply-chain problems that have helped to produce shortages, long delivery times and rapid price increases for food, televisions, automobiles and other products.

In remarks at the White House, Mr. Biden said that the Port of Los Angeles would begin operating around the clock to relieve growing backlogs and that the administration was encouraging states to license truck drivers more quickly. Companies including Walmart, FedEx and UPS are also moving to work more off-peak hours, he said.

“Today’s announcement has the potential to be a game-changer,” Mr. Biden said of the longer port hours, adding that for the positive impact to play out, private sector companies “need to step up as well.”

Monthly price gains have slowed from their breakneck pace earlier this year — they popped as much as 0.9 percent this summer — but they remain abnormally rapid. Tangled shipping routes have helped to push couch and table prices higher, and consumers are paying more for everyday items like meat, eggs and gasoline. Rents are also jumping, raising alarm bells among many economists. Shelter is an important part of overall inflation, and when rents start to move up, they tend to stay up for a while.

In a nod to how persistent the price increases are proving, the Social Security Administration said on Wednesday that benefits would increase 5.9 percent in 2022, the biggest boost in 40 years. The increase, known as a cost-of-living adjustment, is tied to rising inflation.

The reality that American households are paying more for dinner, fuel and housing is a major political problem for Mr. Biden. Voters could punish Democrats at the polls as wage gains, while decent, fail to fully cover higher costs.

It also poses an economic dilemma for the Fed, which must decide how quickly to scale back its economic support when inflation is high but the nation is millions of jobs shy of prepandemic levels. The Fed is tasked with maintaining both relatively stable prices and full employment.

Fed officials have been buying $120 billion in bonds each month and holding interest rates near zero to keep borrowing cheap and money flowing. The economy has progressed enough this year that they could begin slowing their buying program in November or December, minutes from their last meeting, released on Wednesday, suggested.

But officials would prefer to leave their policy rate at rock bottom for some time, giving displaced workers time to trickle back. Pernicious inflation could complicate that plan, forcing them to raise rates earlier and more quickly than they would prefer to keep prices under control. Rate increases dissuade borrowing and cut into demand for cars and houses, eventually slowing price increases and the broader economy.

The potential conflict between the central bank’s two goals could set the stage for a tense 2022.

The staying power of rapid price increases has come as a shock to many economists and officials.

Inflation jumped early in 2021 as prices for airfares, restaurant meals and apparel recovered after slumping as the economy locked down during the depths of the pandemic. That was expected. But more recently, prices have continued to climb as supply shortages mean businesses cannot keep up with fast-rising demand. Factory shutdowns, clogged shipping routes and labor shortages at ports and along trucking lines have combined to make goods difficult to produce and transport.

The snarls show no obvious signs of easing, and although Fed officials still think inflation will fade, they are increasingly concerned that supply disruptions could last long enough to prompt consumers and businesses to expect higher prices. If people believe that their lifestyles will cost more, they may demand higher compensation — and as employers lift pay, they may charge more for their goods to cover the costs, setting off an upward spiral.

Wages are already heading up, though typically too little to fully offset the amount of inflation that has occurred this year. There are notable exceptions to that, including in leisure and hospitality jobs, where pay has accelerated faster than prices.

The fact that rents and other housing costs are now climbing only compounds the concern that price gains are becoming stickier.

“You have the sticky, important and cyclical piece of inflation surprising to the upside,” said Laura Rosner-Warburton, an economist at MacroPolicy Perspectives. “It is certainly a very significant development.”

Matt Permar, a 24-year-old mail carrier from Toledo, Ohio, rents a two-bedroom apartment in a suburban area with a friend from college. The pair had paid $540 a month each for two years, which Mr. Permar called “pretty standard.” But that has changed.

“With the housing market being the way it is, they raised it about $100,” he said of his monthly rent. As a result, Mr. Permar said, he will have less cash to save or invest.

The Fed aims for 2 percent inflation on average over time, which it defines using a different but related index, the Personal Consumption Expenditures measure. That gauge is released at more of a delay, and has also jumped this year.

Central bankers have said they are willing to look past surging prices because the gains are expected to prove transitory, and they expect long-run trends that had kept inflation low for years to come to dominate. But they have grown wary as rapid price gains last.

The Fed’s September meeting minutes showed that “most participants saw inflation risks as weighted to the upside because of concerns that supply disruptions and labor shortages might last longer and might have larger or more persistent effects on prices and wages than they currently assumed.”

Fed officials’ moves toward slowing their bond purchases could leave them more nimble if they find that they need to raise rates to control inflation next year. Officials have signaled that they want to stop buying bonds before raising rates, so that their two tools are not working at odds with each other.

Wall Street is watching every inflation data point closely, because higher rates from the Fed could squeeze growth and stock prices. And climbing costs can cut into corporate profits, denting earning prospects.

White House officials and many Wall Street data watchers tend to emphasize a “core” index of inflation, which strips out volatile food and fuel prices. Core inflation climbed 4 percent in the year through last month, but the monthly gain was less pronounced, at 0.2 percent.

Some economists welcomed that moderation as good news, along with the cooling in key prices, like airfares, that had popped earlier in the economic reopening. Others emphasized that once supply chain kinks were worked out, prices could drop on products like couches, bikes and refrigerators, providing a counterweight to rising housing expenses.

Omair Sharif, founder of Inflation Insights, said he expected consumer price inflation to moderate, coming in at 2.75 percent to 3 percent on a headline basis by next July, and for core inflation to cool down even more.

“I don’t think there’s any reason to panic,” he said.