Home World She Hates Biden. Some of Her Neighbors Hate the Way She Shows...
World

She Hates Biden. Some of Her Neighbors Hate the Way She Shows It. 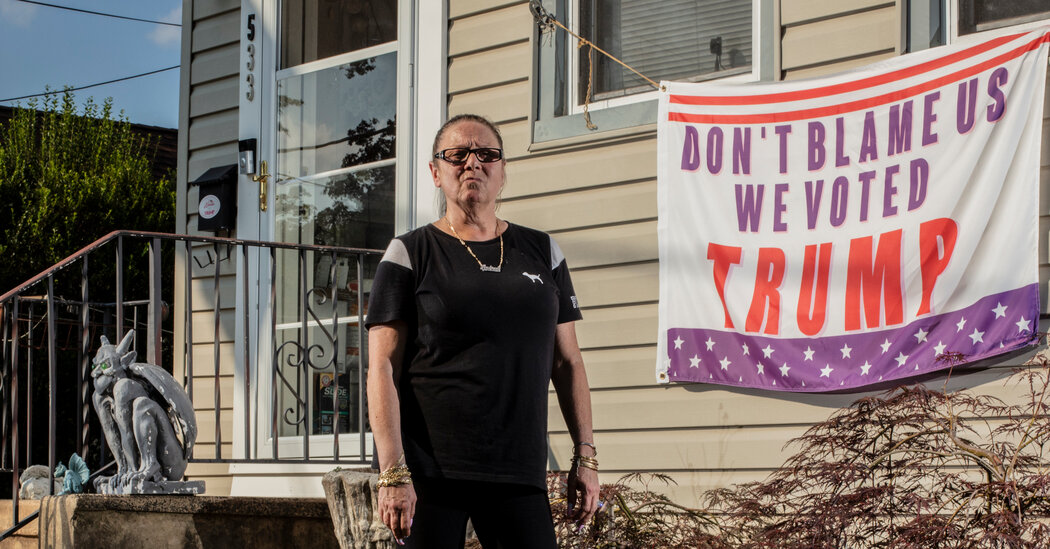 Andrea Dick is a die-hard supporter of former President Donald J. Trump and thinks the election was stolen from him, although that claim has been thoroughly discredited. She does not like President Biden, and that is putting it mildly.

Her opinions are clear in the blunt slogans blaring from the banners outside her New Jersey home: “Don’t Blame Me/I Voted for Trump” and several others that attack Mr. Biden in crude terms. Several feature a word that some people find particularly objectionable but whose use the Supreme Court long ago ruled could not be restricted simply to protect those it offends.

When local officials asked her to take down several of the banners that they said violated an anti-obscenity ordinance, she refused. Now, she is resisting a judge’s order that she do so and pledging to fight it in court on free speech grounds.

“It’s my First Amendment right,” she said in an interview on Monday, “and I’m going to stick with that.”

In a country where the political fault lines are increasingly jagged and deep, Ms. Dick’s case is the latest of several such disputes to highlight the delicate balance local officials must sometimes strike between defending free speech and responding to concerns about language that some residents find offensive.

Ms. Dick, 54, said she acquired the banners — which are available from Amazon and other retailers — earlier this year, but did not hang them on the home in Roselle Park where she lives with her mother, or on the fence outside, until Memorial Day.

“Something must have gotten me worked up,” she said.

Shortly after the holiday weekend, she said, she became aware that some Roselle Park residents, noting that her home was near a school, were upset about the language on the banners and about the potential for passing children to see it.

But the town’s mayor, Joseph Signorello III, said he had received several complaints about the banners, which he passed on to the borough’s code enforcement officer. Residents of Roselle Park, a town of 14,000 people about a 40-minute drive from Times Square, voted overwhelmingly for Mr. Biden in November.

“This is not about politics in any way,” said Mr. Signorello, a Democrat. He added that officials would have taken the same steps if the signs expressed opposition to Mr. Trump using similar language. “It’s about decency.”

After visiting the home, the code enforcement officer, Judy Mack, cited Ms. Dilascio for violating a Roselle Park ordinance that prohibits the display or exhibition of obscene material within the borough.

Ms. Mack said that in more than 12 years as a code enforcement officer in Roselle Park, she had never invoked the ordinance before. She also said that while Mr. Signorello had passed on the residents’ complaints, he had not directed her to take any specific action.

Ms. Dick was given a few days to remove the banners, Ms. Mack said. When she did not, she was given a summons to appear in court.

At that appearance, last Thursday, Judge Gary A. Bundy of Roselle Park Municipal Court gave Ms. Dilascio, as the property owner, a week to remove three of the 10 signs displayed on the property — the ones including the offending word — or face fines of $250 a day.

“There are alternative methods for the defendant to express her pleasure or displeasure with certain political figures in the United States,” Judge Bundy said in his ruling, noting the proximity of Ms. Dick’s home to a school.

The use of vulgarity, he continued, “exposes elementary-age children to that word, every day, as they pass by the residence.”

“Freedom of speech is not simply an absolute right,” he added, noting later that “the case is not a case about politics. It is a case, pure and simple, about language. This ordinance does not restrict political speech.” (Nj.com reported Judge Bundy’s ruling on Friday.)

Jarrid Kantor, Roselle Park’s borough attorney, applauded the judge’s decision, saying that local officials had been careful not to make an issue out of the political nature of Ms. Dick’s banners and had focused instead on the potential harm to children.

“We think he got it just right,” Mr. Kantor said.

But Thomas Healy, a law professor at Seton Hall University with expertise in constitutional issues, disagreed.

Citing a 1971 Supreme Court decision, Cohen v. California, that turned on the question of whether the same word at issue in Ms. Dick’s case was obscene, Professor Healy said the word clearly did not qualify as obscene speech in the context of the political banners.

“It’s hard to imagine a simpler case from a constitutional standpoint,” he said, adding that he would be “stunned” if Judge Bundy’s ruling were upheld.

Professor Healy said he also found it troubling that the enforcement action had come after the mayor relayed concerns about the banners to the code enforcement officer, even though both of them said that Mr. Signorello had not directed any specific action.

Conflicts like the one involving Ms. Dick have flared up this year on Long Island; in Indiana, Tennessee and Connecticut; and about a half-hour’s drive south of Roselle Park, in Hazlet, N.J.

Hazlet officials received complaints like those in Roselle Park when a homeowner put up a similar anti-Biden banner there, Mayor Tara Clark said.

Citing an anti-nuisance ordinance, Ms. Clark said, officials approached the homeowner last month and asked that he remove the offending flag, but they did not take any steps to force him to do so.

“We knew that there were residents who were upset,” she said. “but we also know that free speech is protected under the Constitution of the United States.”

Though some people might have been unhappy that the banner could not be forced down, Ms. Clark said that she and her fellow Hazlet officials felt it was important to stand up for the First Amendment.

“It ended there,” she said. (The homeowner took the banner down last week, she said.)

As for Ms. Dick, she and her mother have about two weeks to appeal Judge Bundy’s ruling to New Jersey Superior Court. He said the daily fines would begin accruing on Thursday if the offending banners remained up, regardless of whether Ms. Dick and her mother chose to appeal. If they do appeal, he suggested they take the banners down pending the outcome.

On Monday, Ms. Dick did not sound like she planned to follow that advice. She said she was looking for a new lawyer and was committed to seeing the case through.