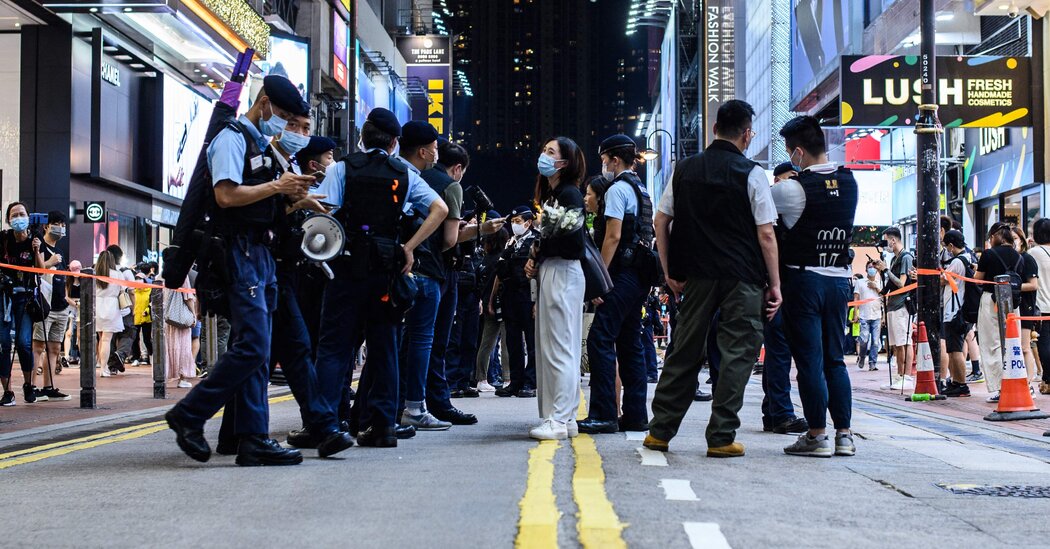 HONG KONG — Last week in Hong Kong, on the politically sensitive anniversary of the city’s return to China, a man stabbed a police officer on a busy commercial street, then killed himself.

Then, on Tuesday, the police said they had arrested nine people — including six teenagers — and accused them of plotting to make bombs and plant them in courtrooms, railways and other public areas.

In a city besieged by political turmoil, the authorities cast the incidents as terrorism and proof of the threat posed by some parts of the opposition. They said the episodes underscored the necessity of a national security law Beijing imposed last year, and they have suggested that even stricter measures may be required.

“These show that ‘black violence’ has transformed from actions conducted by a crowd on the ground, to hidden, individualized acts,” Carrie Lam, the city’s chief executive, told reporters on Tuesday of the recent developments.

But democracy activists have accused the government of creating an environment in which lawful, peaceful protest is impossible — leaving residents desperate and, in some cases, radicalized.

Some residents also suggested that the police were overstating the threat of violence in order to demonize the pro-democracy movement. Though the police have announced a number of foiled bomb plots since anti-government protests erupted in 2019, few suspects have gone to trial, making it difficult to assess how much of a threat they posed, experts have said.

At a news conference on Tuesday, the police said the nine people accused of the bomb plot ranged in age from 15 to 39 and were connected to an activist group, Returning Valiant. Officials said they found small quantities of raw materials for making explosives in a hostel room the group had rented, along with a manual. The group had planned to carry out its plot some time this month, the police said, and then to leave Hong Kong.

The events reopened an uncomfortable debate within the pro-democracy movement: whether it condones or even supports violence, in the name of its underdog fight against a seemingly all-powerful Beijing.

That question also shadowed the 2019 protests, as some demonstrators adopted increasingly violent tactics, such as throwing Molotov cocktails at police officers or even physically attacking pro-Beijing civilians. But it has taken on a new dimension under the security law, as the government has effectively banned protests and rounded up opposition figures in mass arrests.

“I think even in the past year, the line has been pushed forward,” Ivan Choy, a political scientist at the Chinese University of Hong Kong, said of the movement’s tolerance for more extreme tactics.

That tolerance was evident after the knife attack on Thursday drew unexpected sympathy for the assailant. The attacker walked up behind a police officer and plunged a knife into his back, according to video captured by a local website. He then stabbed himself and was taken to a hospital, where he died.

The authorities said the assailant was 50 years old, and that newspapers, materials on his computer and a suicide note found at his home suggested that he had been “radicalized.” Reports later identified him as Leung Kin-fai, who had worked as a purchasing manager at Vitasoy, a beverage company.

Officials quickly blamed the attack, which left the officer with a punctured lung, on anti-government sentiment.

“These people also have blood on their hands,” he said. “I hope that everyone will condemn them.”

But in the hours after the attack, many did the opposite. Social media filled with posts paying respects to the man and thanking him for what they called his sacrifice.

Around 5 p.m. on Friday, at least a dozen people, many dressed in black and carrying flowers, milled about the street corner where he had collapsed. Bouquets also lay in doorways or tucked in the handrail of a nearby subway station’s entrance.

Far from condemning the violence, several said they understood the hopelessness that may have fueled it, and said the responsibility lay with the government for suppressing other outlets of expression.

“Of course I don’t want to see violence,” said S.W. Tang, who was carrying a bouquet. “But I cannot put a critical judgment on him.”

In the past, Ms. Tang said, Hong Kongers could rely on the courts and other legal guarantees when faced with injustice. “Now, we don’t trust these things still exist anymore,” she said. “So if I say, ‘Don’t go to violence, don’t try to sacrifice your life’ — if not doing that, then how?”

Kelly Chen, who brought her 5-year-old daughter, said she did not think laying flowers would glorify the incident or inspire others to follow suit. She said she believed the man’s outburst was an anomaly.

But some experts said the tributes could breed copycats.

The police have been on high alert for other threats, arresting at least three people this week for social media posts that they said encouraged attacks on law enforcement officers.

Still, other uglier sentiments have continued to spread. On LIHKG, an internet message board popular with more radical protesters, a link to an article saying the wounded officer’s condition had stabilized received 44 up-votes and nearly 3,000 down-votes.

The authorities rejected any responsibility for the attack.

“Do not look for excuses on behalf of the violent,” Mrs. Lam said on Tuesday.

Mr. Tang, the security secretary, said those who blamed the authorities for the man’s actions were encouraging others to follow suit.

“Many people use the fact that police are strictly enforcing the law as an excuse to tell the public that you have to break the law even more,” he said. “This is exactly what we are very worried about.”

But in a sign of how deeply polarized Hong Kong has become, there seemed to be little appetite for milder or more nuanced statements.

The day after the attack, news of a memo at Vitasoy expressing condolences to its deceased employee’s family, provoked immediate backlash from the pro-government camp. In mainland China, celebrities ended endorsement deals with the company.

Even though Vitasoy issued another statement saying the memo was unauthorized and that the company condemned violence, its stock plummeted.

The limited space for expression was clear to Dorothy Wong, 27, who visited the site with flowers on Friday. The police stopped and searched her, and recorded her personal information, she said.

Ms. Wong said she could not condone an attempt to kill a police officer. But she also questioned why the police would bar her from mourning the man who died.

“It’s so ridiculous. We are just holding white flowers,” she said. “Why could this be an illegal action?”