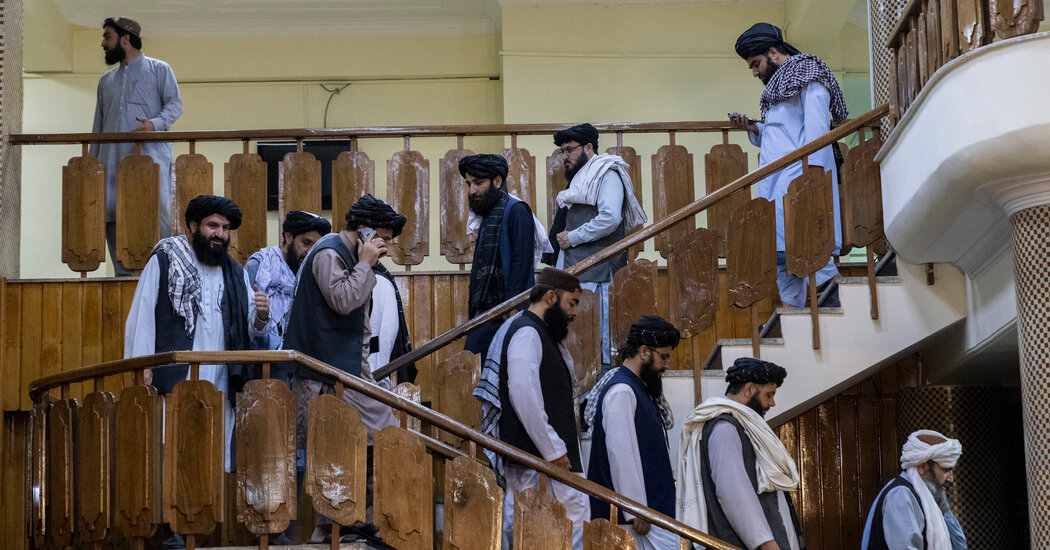 KABUL, Afghanistan — The Taliban announced a caretaker government on Tuesday, taking a major step in re-establishing their Islamic Emirate of Afghanistan, and empowering many of the movement’s stalwarts from their regime in the 1990s.

After weeks of assurances from Taliban leaders that the movement would offer a more moderate and inclusive style of governing, most of the acting appointments on Tuesday were of senior figures who served in similar roles decades ago — a sign that the group’s conservative and theocratic core remain largely unchanged. All were men, and several are listed by the United States and United Nations as global terrorists.

“I assure all our countrymen that these officials will work hard to uphold Islamic rules and Shariah law,” Sheikh Haibatullah Akhundzada, the movement’s supreme leader, said in a written statement handed out at a news conference in Kabul. “The Islamic Emirate needs the continued support of its people to rebuild the ruined country together.”

The Taliban made clear that more appointments would be coming, extending a process that has already stretched for weeks since the group suddenly seized national control last month.

The most senior role announced on Tuesday went to Mullah Muhammad Hassan, who was named as acting prime minister, making him head of government. Mr. Hassan is a hard-liner who filled a similar role within the insurgency’s leadership council in recent years, and was a deputy prime minister of the first Taliban government.

Some analysts had thought that Mullah Abdul Ghani Baradar, who had led the Taliban’s negotiations with the United States, would take that role, but instead he was named as deputy, along with Mawlawi Abdul Salam Hanafi, a prominent Uzbek member of the negotiating team.

The top security posts, however, went to relative newcomers from a younger generation of Taliban leaders, both serving as Sheikh Haibatullah’s powerful military deputies.

Sirajuddin Haqqani, 48, appointed as acting minister of the interior, presided over the insurgency’s campaign of urban bombings that terrorized the capital city, Kabul, for years. His new post will give him extensive authority over policing and legal matters. Mawlawi Muhammad Yaqoub, who was named acting defense minister, is the oldest son of the Taliban’s founding leader, Mullah Muhammad Omar, and is thought to be in his 30s.

Much of the cabinet, including Mr. Baradar, had served in the Taliban’s political office in Doha, Qatar. Among them were Amir Khan Muttaqi, the acting foreign minister; his deputy, Sher Abbas Stanikzai; and four of the so-called “Guantánamo Five.” They were held at the American detainment camp at Guantánamo Bay for 13 years before being exchanged in 2014 for Sgt. Bowe Bergdahl, an American soldier captured by the Taliban.

In order to govern, the Taliban will need to secure aid, which has been frozen by the United States and other nations. Yet U.S. sanctions against some cabinet members, including Mr. Haqqani and his uncle, Khalil Haqqani, appointed acting minister of refugees and repatriation — both listed as leaders of the terrorist-designated Haqqani network — will make that a difficult proposition.

Another factor will be foreign governments, lenders and aid organizations who are waiting to see the fate of the opposition and whether the Taliban will respect rights for women and ethnic and religious minorities. Just hours before the Taliban announced their new government posts, in fact, their fighters were on Kabul’s streets violently breaking up a peaceful demonstration for the second time in less than a week.

As the crowd of demonstrators grew on Tuesday, with hundreds of women joined by at least as many men, the Taliban began beating protesters with rifle butts and sticks, witnesses said, and the crowd scattered after the fighters began firing into the air.

Rezai, 26, one of the organizers of the latest protest, said the demonstration was planned in coordination with people trying to organize a national resistance to the Taliban.

“We invited people using social media platforms,” she said. “And there were more people than we expected. We are expecting more rallies tonight because people do not want terror and destruction.”

As they marched on Tuesday morning, they carried a banner with a single word: “Freedom.”

The protests are happening as the Taliban cement their military grip on the country as well, announcing on Monday that they had seized the capital of restive Panjshir Province.

Afghanistan also faces a worsening humanitarian crisis. Basic services like electricity are under threat, while the country has been buffeted by food and cash shortages.

Thousands of Afghans are still desperately trying to flee the country, even as the United States works to evacuate dozens of its citizens. At a news conference in Doha, Qatar, on Tuesday, Secretary of State Antony J. Blinken said U.S. officials were “working around the clock” to ensure that charter flights carrying Americans can depart Afghanistan safely.

One senior Western diplomat, speaking on condition of anonymity, said the fact that the Taliban took more than three weeks to announce even a transitional government, despite pressing need to reestablish services and economic functions, could be taken as a sign that “they weren’t really ready, and they didn’t have a plan.”

The appointed officials, who were all men, were also notable for including only a few non-Pashtuns, despite the country’s ethnic diversity and the Taliban’s promises of inclusive government.

At the news conference naming the new cabinet, the chief Taliban spokesman, Zabihullah Mujahid, who was named deputy information and culture minister, stressed the transitional nature of the government.

“This is an acting cabinet appointed to handle current affairs, and we are preparing the foundations of government and state-building,” he said. “In the near future, the role of the people’s participation and the shuras will be developed.”

Taliban officials said that a nationwide gathering of religious scholars and elders is still being planned in order to confirm Sheikh Haibatullah, a native of Kandahar Province and a widely respected religious scholar within the movement, as Afghanistan’s supreme leader.