Home Food The Making of ‘High on the Hog,’ Bringing Black Food History to...
Food

The Making of ‘High on the Hog,’ Bringing Black Food History to TV 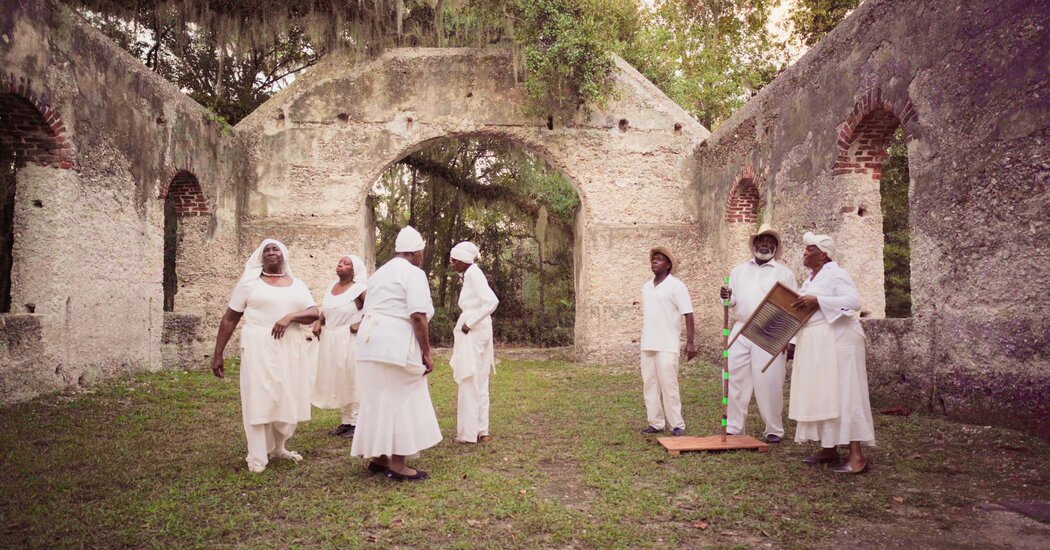 There is a breathtaking moment near the end of the first episode of “High on the Hog: How African American Cuisine Transformed America,” a new four-part Netflix documentary based on the 2011 book by the scholar Jessica B. Harris.

The scene unfolds in Benin, a country Dr. Harris has visited a dozen times in her work chronicling the connection between the foods of West Africa and the United States. She tenderly leads the series’ host, Stephen Satterfield, to the Cemetery of Slaves. The beachfront memorial marks the mass grave of thousands who died in captivity before they could be loaded into ships at one of the most active slave-trading ports in Africa.

Mr. Satterfield, a reserved 37-year-old who moved from a restaurant career to one in media, begins to cry. “I’m so glad I can tell them thank you,” he says. “And I’m so glad that finally, I get to bring them home with me. They get to come home.”

He breaks down into coughing sobs. Dr. Harris, nearly four decades his senior, holds him and reminds him to breathe. “It’s OK, sweetie,” she says. “Walk tall.”

To say there has never been a food show like this is not a stretch. Historically, American food TV has largely reduced African American cooking to Southern or soul food. Even when it came to barbecue, producers favored white cooking personalities over Black ones.

“The way we talk, entertain, dress, create — all of that stuff has been recognized, but not our food,” said Adrian Miller, one of the historians featured in the series, who recently published “Black Smoke,” a book about African Americans and barbecue.

“High on the Hog” — the phrase refers to the location of the best cuts of meat on a pig but has come to connote wealth — marks a departure from the days when “all the Black folks on these shows were just caricatures,” said Tanya Holland, a Bay Area chef and food TV veteran.

Ms. Holland, 55, polished her cooking technique in France, and holds a degree in Russian language and literature. But that made no difference to television executives 20 years ago. “In 2000, when the Food Network cast me in ‘Melting Pot,’ they were like, ‘Can you do a brunch with your girlfriends sitting around going, ‘Hey, girl’?” she said. “Every show, they kept telling me be more sassy.”

“High on the Hog” is an overdue corrective.

The documentary is framed as Mr. Satterfield’s journey. It begins at the Dantokpa Market in Benin, and ends at Lucille’s in Houston, where diners discuss Black culinary excellence over a meal that the chef Chris Williams prepared for Toni Tipton-Martin from Ms. Tipton-Martin’s book “Jubilee: Recipes From Two Centuries of African American Cooking.”

In between, Mr. Satterfield travels to the Gullah Geechee rice belt in South Carolina, samples pepper pot made with oxtail in Philadelphia and visits New York to pay homage to Thomas Downing, king of the city’s oyster culture in the 19th century, and to the young shuckers carrying on his legacy. In Texas, Mr. Satterfield rides a horse (for the first time), goes to a Black rodeo and learns to make son-of-a-gun stew from offal the way the first Black cowboys did in the 1800s.

And in a segment that may change how a new generation views boxed macaroni and cheese, the foodways teacher and historian Leni Sorensen recreates an early American version of the dish from a recipe developed by James Hemings, an exceptional French-trained chef whom Thomas Jefferson kept enslaved.

“It isn’t about the mac and cheese,” said Karis Jagger, one of the show’s producers. “It’s about survival, and showing how fantastic and brilliant some of these figures were who we just don’t know enough about.”

The seeds of the show were sown six years ago when the food journalist Jeff Gordinier was reporting an article for The New York Times on African American cooking. Alexander Smalls, the chef and co-owner of the Cecil, in Harlem, told him to read Dr. Harris’s book. Mr. Gordinier did, then told a friend, the producer Fabienne Toback.

Ms. Toback read “High on the Hog” in one sitting, and wept. She and Ms. Jagger, her longtime creative partner, were raw from the 2014 killing of Michael Brown Jr. by a police officer in Ferguson, Mo., and were looking for material that had more depth and meaning to them. They quickly asked Dr. Harris for the rights.

“She said yes to a couple of scrappy middle-aged Black women, and we were so grateful,” Ms. Toback said. “We wanted to make something grand, like she is.”

Dr. Harris called the women angels. “They were just hellbent on getting it produced,” she said.

Although her work has been used for other projects, including the food programming and cafeteria menu at the National Museum of African American History and Culture, turning her book over to documentary producers was different. “It’s like giving your child up for adoption, and you have to trust the adoptive parents,” said Dr. Harris, who appears only in the first episode.

Although it took five years to turn what is essentially the first half of her book into a documentary, the timing of its release is perfect, Dr. Harris said.

“What we are seeing is extraordinary,” she said. “This is a social movement writ large, and food is a very big part of it.”

To acquaint themselves with new keepers of Black food culture to feature alongside established historians, the producers started their own food blog, Hey, Sistah, and scoured the internet.

That led them to cooks like Jerrelle Guy, a popular food blogger and photographer who wrote the 2018 cookbook “Black Girl Baking” (and who contributes to New York Times Cooking). In the documentary, as she creates desserts for a Juneteenth celebration, she has a tearful discussion with Mr. Satterfield.

“I feel like the kitchen is one of the safest spaces for me,” she tells him. “It gives me a feeling of empowerment, and I think that is really important for a lot of Black women who maybe don’t have a space like that.”

“Each and every episode, we were moved to tears,” he said in a phone interview from Mexico City, where he is directing a feature film. “And it was not just a couple of people. There were moments when everyone was in tears. We felt the spirit every single day of shooting.”

“High on the Hog” was particularly meaningful for him. His mother died two months before production began. Although he was raised outside Philadelphia, his family is Gullah Geechee and settled in Charleston, S.C. He remembers visits to the Lowcountry as a child filled with farm work and okra soup.

That’s why the okra soup that the culinary historian Michael W. Twitty cooked over a fire near a slave cabin on a plantation in South Carolina was by far Mr. Williams’s favorite dish in the series.

“We know that food is an emotional thing for people, but I think it’s something completely different for African Americans because of all the pain we’re holding inside with our history,” he said. “But it wasn’t all sorrow and pain. There was great joy around the table for us as a family.”

As a food-show host, Mr. Satterfield is as introspective as Stanley Tucci is effusive or Anthony Bourdain was bold. He turned out to be exactly the host the show called for, Mr. Williams said. Mr. Satterfield is well respected among people committed to social and political change through food, and he had no preconceived ideas about how to anchor a documentary.

“I would describe him as wonderfully green,” said Shoshana Guy, the NBC journalist who was the series’ showrunner. “When someone is green, it’s like an unpainted canvas.”

Mr. Satterfield, the founder of the media company Whetstone, had no idea he was being recruited when he met with Ms. Toback in Los Angeles. He simply thought she was asking for some help as they prepared to pitch the series to Netflix, which quickly embraced the project. When he realized they wanted him to host, he agreed immediately.

“Dr. J for me has always been an intellectual titan, a cultural titan,” he said, using a nickname for Dr. Harris. “The only thing I can liken it to is if you grew up idolizing Michael Jordan or LeBron, and now you are teammates.”

Mr. Satterfield, who recently moved from Oakland, Calif., back to Atlanta, his hometown, is trying not to worry about how the show will be received or the spotlight that will shine on him.

“When I think about what I want from the show, people’s imaginations being reconfigured is at the top of the list,” he said. “There’s a celebratory vibe to this show that feels like an arrival. It feels like a victory for so many of us. It has that emotional quality of liberation.”

With today’s seemingly endless supply of practical weeknight chicken recipes, it can be easy to forget that, once upon a time, chicken was...
Read more
Food

That Expensive Bourbon You Bought May Be a Fake

“I saw one collection that was in its entirety fake, and it had all been gathered 20 to 30 years ago,” she said....
Read more
Food

In Singapore, Lunar New Year Is a Multicultural Feast

For about two decades, Shila Das has brought her chicken curry and nasi biryani to her best friend, Wendy Chua, for their Lunar...
Read more